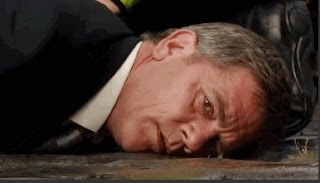 Karl's comeuppance finally happened on his wedding day, the wedding day that lasted through 5 frigging episodes! Ok, the day before and the wedding day lasted that long. They don't do that too often but it's happened before. Anyway, the pressure built and built and poor young Craig finally broke and told the secret. I felt so bad for the kid. He really thought he was to blame for the fire and deaths of two people regardless of what the police said (fire started inside the pub with an accellerant. Why didn't anyone tell him that before? Surely he'd have overheard stuff? Never mind. He's a child really and that's way too much for a child to have to carry even without Karl bullying him and terrifying him.

Beth was brilliant, showing that she really is a good mum in spite of her low class rough ways. I adore her and this shows a softer side of her which you need to be a long term sympathetic character. She might have a passing resemblence to Cilla Brown and a gob to match but she's a much better person. Cilla would never defend her chicks unless there was something in it for her. Beth is like a pitbull defending her lad and that's the way it should be. 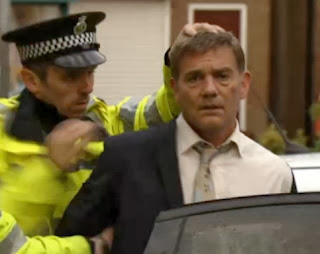 Jason finally persuaded Dev that Karl was responsible for the fire and Sunita's death, along with Karl's hot and cold behaviour and they zoned in for the ...er... kill, so to speak. Stella got the shock of her life and now feels as stupid as every other duped woman who never saw it coming. She and Fiz and Gail should start a club! This crisis really has shown up how little Stella fits in. She has no friends! Fiz or Gail could have commiserated with her, having been through a similar thing. Eileen and Deirdre could have shown up with a bottle of red or two. But no. Stella's alone and wallowing in it and her daughters and mother can't do much to pull her out of it. I do feel for her, mind you. You can't expect her to snap out of it in a couple of days but I harken back to the days of Bet Lynch. Bet would have plastered a smile on her face, slapped on some lippy and faced the community from behind the bar, suffering in silence. She wouldn't have cowered in the back room.

Hearts are breaking all over Corrie-dom. We have to watch Roy and Hayley deal with her terminal illness. It's tragic but there can be no other way that Hayley would leave Roy (since the actress wants to go). It's too bad Sylvia isn't there to support them but apparently the actress was leaving anyway and just left early due to a sudden death in her family. I suppose with Sylvia on screen it might take away from Roy and Hayley who should be front and centre. The actors are already giving us award worthy performances. It's going to be unimaginable, watching this sad story play out, not the less that so many people watching will have had real life experience in similar situations. Hayley plans to make the most of the time she has left. She's another one I can't see cowering in the flat, holding her own pity party away from those that love her. Hayley always has taken life by the throat, as difficult as it has been for her at times. Realistically, though, we should have the occasional scene with her being sad or angry. It wouldn't be normal to react that way sometimes. 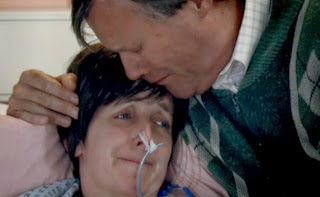 Fiz and Carla seem to be taking the second string for support. You would have expected Fiz who is like a daughter to R&H. Carla was a surprise. We all knew she respected and liked Hayley but I think her reaction has even surprised her. They finally dragged up Christian from the annals of "Corrie history that should have been forgotten". He was just as obnoxious as he was last time, just without the violence. You'd think he'd have got his head round the fact that his biological father is now a woman after all this time but apparently he's just buried it and forgotten it (the way we all wanted to) so when she got in touch again, he really hasn't come to terms with it at all. Hayley's a grandma but probably won't get to meet her grandchildren. Roy was quite harsh with Christian but he did have some of it coming. I don't know if we'll see him again but it would be nice for Hayley and he to at least come to terms with it and him to at least accept her and bring the children for her to meet. But then, unless you're planning to have them around a lot, meeting them once only isn't really fair on both sides if she's going to die before ever seeing them again.

Meanwhile, speaking of Carla, there's Michelle glaring at Peter, the intruder, in the factory office. Michelle was hired as a PA but given more responsibility over time and she thinks Peter's edging her out. He's not but he can't seem to get her to realize it. I keep hollering "Grow Up!" but she just won't and she can sulk for England, can Michelle. And like it or not, Peter is part owner and thus, her boss. Oh come on, Michelle, at least it isn't Frank Foster or Tony Gordon! It's all leading to the surprise that Steve is buying back the pub! Will Michelle get to be landlady with her name over the door? Time will tell. 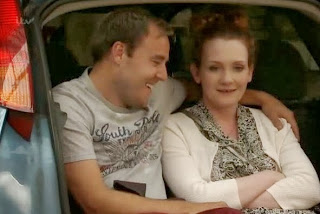 Chesney finally decided Sinead was the one he wanted, not Katy and I couldn't give a flying fig. I do like Sinead but Chesney and Katy are terminally boring these days. I am chuffed to little mint balls that Fiz and Tyrone are now living under the same roof as a lovely little family. I think with Roy and Hayley as the "perfect" relationship about to end, we need one stable couple on the Street and I think Fiz and Tyrone are the best ones to take over that position. Please, Powers that Be, take note!

As we end the month, Nick is about to wake up and the Plattilsley family feud is about to hot up again. Will Nick remember? Will the secret blow David's marraige up? If the secret doesn't, all the lies just might. But Nick has a lot to lose too, and after waiting so long to get Leanne back, he might not be willing to fess up, either. Secrets do come out and they will, it's just a matter of who, what, when, where and how. This has been one storyline I have really enjoyed watching. Kudos to all the actors involved!
Posted by Tvor at 15:58