Nick's awake, Nick's recovering and he's determined to make David pay. Boot's on the other foot now! This damaged Nick is frustrated and angry. He wanted the truth to be out there and it is and he thinks he's lost everything. Lily turned out to be David's and I think he's kind of disappointed in that. Leanne's gone and he's living within the elastic walls of his mother's house again. I've no idea whether Audrey's roof is fixed, they seem to have dropped that, but if it is, why couldn't he stay there? She has loads of space and a private spare room, I would imagine. Why? Because then he wouldn't be in the middle of all the action with Gail to help him with his physio and Kylie to make him cups of tea and lend a sympathetic ear. Meanwhile David's in situ at newly single Tina's and both of them are being all matey too. I do hope both couples aren't careening towards real affairs on the rebound. Please, Powers That Be, do something different! Let men and women just be friends! 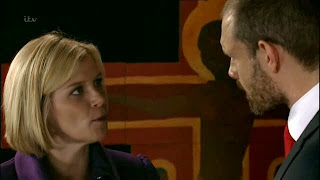 It's also a bit hypocritical of Leanne don't you think? Ok, she's allowed to be pissed but when she got that note, she told Nick it didn't matter that he had that fling on what would have been their wedding day. She took some of the blame for it herself. She insisted he could tell her the truth without repercussions. He didn't and lied to her face. So, of course, finding out he did and with who is bound to upset her. She arrived back just at the end of the month but doesn't seem inclined to want to take him back yet. I think she will. She's probably more upset that he lied to her face when she gave him the out than that he did it in the first place. They'll probably be back together long before Christmas.

As for Kylie and David, that may take a bit longer but I'm hoping they'll make it back together. They really are so perfect for each other. They "get" each other and very few people "get" David. I also hope David finally mans up and gets councilling, the thing he should have had after the Hillman incident but only got a lackadaisical one or two sessons which Gail never enforced, but I don't suppose that will happen. I've really liked this whole story and the dynamic between all the characters of the Plattilsley family.

Hayley has a bucket list, and her new friend Jane, Jane makes her own decisions and inspires Hayley to make hers except it's caused a rift between she and Roy. She wants to end her own life when it gets too debilitating and Roy cannot possibly go along with it. I really can't see the writers actually going through with this on screen. The discussion is controversial indeed and it's good to bring it up, but I don't think they'll follow this through because what Hayley wants to do is actually illegal and they won't want to encourage people to do something illegal. I'm speculating that Hayley won't have a choice, she'll die naturally before she has the chance or else she'll capitulate and not put Roy through it. 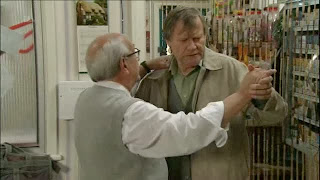 So far we've had a magical day in Blackpool. That was wonderful and one of the best bits was Roy and Norris practicing the foxtrot in preparation! We've seen a bit of Roy learing to drive. I want more! Some of Hayley's bucket list has been online only at Itv.com which is a bit of a shame. I'd like to see her doing more of her bucket list on screen.

The remaining time that we have Hayley is going to be one bittersweet moment after another and it's going to be heartbreaking but, we hope, a satisfying soap experience with stunningly good performances. David Neilson won a Best Acting award from Inside Soap magazine and rightly so. If neither of these actors don't win the British Acting award (BAFTA) it will be a travesty. 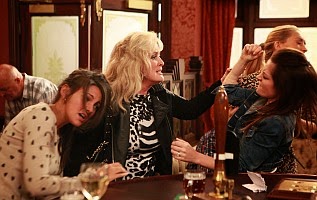 Steve, Michelle and Liz are now entrenched behind the bar and having Liz there is wonderful! It feels like she never left and she's got far more spark to her than Stella ever thought of having. She's great. Liz is a force to be reckoned with. If she breaks up a fight or shouts at someone that they're barred, you know she means it! Stella struggled to shout and she'd never break up a tussle for fear of breaking a nail or getting a speck of colour (blood red!) on one of her beige outfits. Right now she and Gloria are running the Bistro for Leanne and Nick but once normal service is resumed there, I'm sure they'll fade into the background and become little more than a Greek chorus.

But Liz, Liz was never the background chorus. She's a lead player and she'll get into all sorts of trouble. Once she's established, it'll be time to break out a new fella for her because Liz can't go very long without a man in her life. It would be interesting to see her in a triangle with a man and a woman who's younger than Liz, something to tweak her insecurities but have Liz win out in the end.

I still don't like Steve and Michelle as a couple. I didn't the first time and I don't this time. They don't have to be a roller coaster like Steve was with Becky. Michelle seems to treat Steve with very little respect. Ok, he is often an idiot and exasperates her, I'll give you that. But when things are good, she still seems to treat him like a bad and utterly clueless little boy. Becky made Steve laugh and smile. Becky loved Steve with a joy that was palpable. So did Karen. There was passion in both women that inspired it in Steve, too. With Michelle, it's all about her and if Steve isn't up to par with what she thinks he should be or doesn't do what she wants, he's in the doghouse.

Sophie and Jenna have finally broken up. I couldn't be happier. I like Jenna's character. Many don't but I think she's quite good and the actor is good too but they haven't written very well for her and it was a huge mistake to put her together with Sophie. Age difference isn't normally a big deal on Corrie but this 10 year gap was glaring. Sophie really is a stroppy kid still. She dropped out of college when she does (or did back in her earlier years) have the brains for it, and she's got no real ambition. Jenna was a professional who got a crush on her patient and allowed it to ruin her career. She's bound to have big regrets over that.

The pair of them never seemed to have any chemistry or anything whatsoever in common. Sophie and Sian clicked. Sophie and Jenna didn't. Jenna seemed to have more in common with Sally! You could see them having adult conversations and hanging out as mates. We never saw any of that with Sophie. She and Jenna were never pictured giggling over a film, or dressing up and going out clubbing or having long conversations late into the night over a bottle of wine. Sophie had more chemistry with Ryan and that's saying something because he was a plank! Jenna, however, is great with Lloyd and I think that they do have a spark. I don't know if it's enough to keep Jenna around but as long as she's needed in the cafe, we'll have her there. I don't think she's going to be a long term character. I speculate that she'll get a job in her profession or go back to school or something and that will be it for Jenna on our screens. 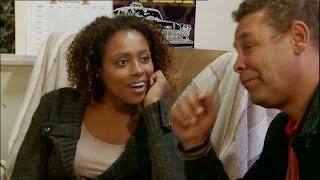 The last straw for Jenna was Sophie's continual moaning about Sally and Tim. She did have a point about those two. Tim is proving to be a waster and a user and Sally is bending over backwards to lower herself in desperation to keep him. He doesn't want a committment, just a casual fling with some home cooking tossed in for convenience. Sally is full on and knows it. When Tim decided he should break up with her, Sally agreed and said she was too clingy and learned her lesson. Tim, thinking he was now in the clear for more no-strings sex and free meals, talked his way back in her bed but we all know she is still hoping to change him and snag him. How many more times will he disappoint her or Faye before Sally gives up? Probably until Kevin gets back but that won't be until after Christmas.

I kind of liked Tim at first, as a father who really didn't know how to be a parent and who seemed to be trying and not doing very well at it. Now he just doesn't seem to give a damn at all about being a dad to Faye unless it's convenient to him. I think his shelf life on the show is limited now. He's shooting himself in the foot so many times that he'll end up limping out of Weatherfield and Faye will have lost her dad again. She won't even have that snotty Grace to pick up the pieces. Wow, that's a piece of work isn't it? That Grace is a manipulator in the same class as Tracy Barlow! Poor Faye has no real experience having a proper friend and is thrilled to be someone's BFF. She will end up in trouble just to keep her friend and her friend will drop her like a hot potato the minute there is trouble on the horizon, distancing herself quickly and brutally. Faye is going to learn a hard lesson there.

So that's the state of the street this month. As we cruise closer to Christmas, things are bound to hot up dramatically. Carla and Peter's wedding is coming up (we haven't actually got a date mentioned do we? I think it will be in early December, and weddings never go smoothly, do they?) and Christmas is always an emotional landmine.
Posted by Tvor at 10:04