David's ongoing revenge, when it worked, made him smug and happy and when it didn't have the intended effect, he took it out on his mother. David really, really needs a psychiatrist. And most of what he's been doing ends up backfiring so he keeps trying more and more tricks. And if Nick is intent on accusing one of his staff, how does he treat his staff that he thinks they'd be out to get him?

Hayley's been relentless, nearly bullying Roy, first about his father and contacting him and this month, about making him go to the doctor to get help for it. I can understand her concern and he really must be an exasperating man to live with at times but you know the real point to the whole storyline, once we knew Roy was sleepwalking, wasn't *why* he was sleepwalking but so that Hayley could go to the doctor for a check up along with Roy.

Right there, that was the beginning of Hayley's medical crisis. Roy is physically healthy but oh, dear, Hayley's tests were not as they should be. If Roy wasn't under enough stress already, this will have him sleepwalking on stage in London's West end doing a song and dance, with the amount of stress this could cause. Because, you know, a few days of incense, yoga and relaxation meditation and Roy was instantly cured, wasn't he, until Hayley told him of the diagnoses and he was up in the middle of the night scouring again! (the sleepwalking, by the way, baffled me because he never woke up Hayley when he'd get out of bed in the middle of the night, probably something he rarely does, and neither she nor Sylvia would hear him up and around in the middle of the night) 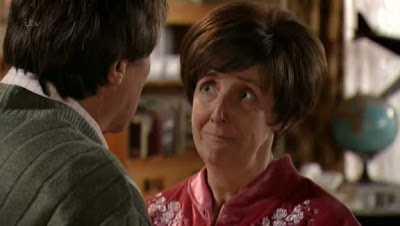 Hayley has pancreatic cancer. Some people think Corrie's storylines shouldn't hit so close to home like this. They say they want to be entertained, not saddened and reminded of people they have lost. While that's true, dramas and documentaries and "based on true story" films and tv shows are also popular so it's a "damned if you do, damned if you don't" thing. It will be difficult to watch Hayley on this journey but knowing the actors involved and knowing that Corrie always does these types of storylines impeccably, it will be, and I use this in its traditional meaning, awesome to watch. 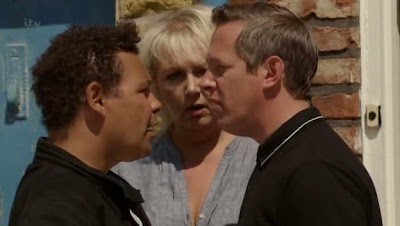 The Racism storyline really was more about pride before it descended into utter ridiculous. We all know that Paul really didn't mean it and it was an unthinking turn of phrase. We all make them and don't realize what we're saying. This might make a few people think twice but the crux of the story focussed on Paul and Lloyd's pride, Paul especially. Paul would probably have apologized for offending Lloyd straight away if Lloyd hadn't got shouty and then called Paul a racist which isn't true but Paul felt he'd be branded as one even if he backed down and apologized. Eileen and Mandy did make them but it was pretty clear that the apology "for how it turned out" wasn't really from the heart. Any time Paul did try to apologize after that, it still wasn't sincere. He did say he was sorry "for everything" but that *still* doesn't really mean he was sorry for what he said and he shouldn't have said it.

And Sophie.... she had no business sticking her oar in and calling the fire station to make an ANONYMOUS complaint. It was taken seriously. How can it? It must have been anonymous because they didn't send someone round to take a full statement. And can't she retract it? If so, why didn't we hear about it? I don't blame Jenna for being furious at Sophie. It was a stupid, immature thing to do.

Looks like Sally is about to have a new fella in the persona of Tim. I guess if they're keeping him around, they have to do more than just let him be Jason's sidekick now that Faye's gone back to Anna, having learned a hard lesson. It would have been far better for Tim's parenting skills if he'd been able to ease into it slowly instead of being pushed into the deep end by a child desperate for a blood connection. You can hardly blame her, really. Anna and Owen allowed him into her life because Faye was giving them such a hard time but Faye then pushed it too far because that's what kids do. It was a tough no-win situation really.

It's been mainly a mercifully Stella-free month. I expect with the wedding approaching we'll be back in full Beige mode but I would think Karl will be facing his comeuppance soon. Probably another interrupted wedding because you can't have it go smoothly, can you? It only goes well if it's the second attempt (Steve and Becky) or if there's a minor crisis but it's solved in time for a late arrival at the altar (Rita and Dennis).

Tina has given Gary and Izzy the baby who gets to be called Jake again. Jake...Joe... Not overly keen on either and Joe always would remind me of a man that fell to pieces and couldn't even fake his own death properly. Tina is bottling up her feelings and is going to crack. I also wonder why they're putting her in David's path as confidant. Do we all think that there could be a revenge fling there? Or maybe he'll be the one to pull her out of another depression. Could go either direction. Anyway, when they finally get the baby home, Gary is nervous. Really nervous. So nervous and wound up that he can't understand why the baby won't stop crying and he's taking it as a personal affront. Gary likes things to go exactly correctly and when they don't, he gets single minded, excited and anxious and the baby can pick up on that.

I'm almost positive Emily is going to mither Norris with bills and taxes to the point where he'll be more than happy to give her the house back. Why is he so worried about being homeless when Emily dies? He owns a business. Surely he can afford a house of his own. Why doesn't he buy himself a little flat now?

Katy and Ryan are splits. I'm hoping Chesney won't take her back but I suppose he will for the baby's sake. That's if he can get round his own pride. It was only a kiss that he couldn't forgive, after all. He pushed Katy to Ryan so it's his own damn fault. He's using Sinead to prove to Katy that he doesn't need her but he still loves her. Sinead is going to be used and thrown away which is too bad because I like her. I hope she stays around though at the moment there's nobody to pair her up with. The only other one could be Jason but she's a little young though not really that much younger than Rosie was. Jason's been through everyone else on the Street! 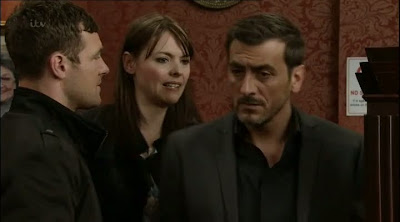 Now we have Rob and Tracy in business together and, after bankrupting Peter, they get to use the betting shop as their pawn shop. Never mind the "reseller" type monikers. It is what it is. If Rob is as dodgy with this as he has been with things in the past, it could end up being a front for stolen goods. But wouldn't it be an ironic twist that they make a real go of it? It would be, but I highly doubt that will happen.

Not really a bad month, overall. If it wasn't for the Ryan/Katy/Chesney dullness and the racism storyline descending into a mess, it would have top marks from me.
Posted by Tvor at 19:49

The medical clinic really needs to open a mental health department, with several therapists available. If the people on that street could be shown that such treatment can help, it would be a service that the program could demonstrate to viewers, in addition to subjects such as the current cancer storyline. Eileen and Roy's reluctance to seek help is probably typical of a lot of people in such circumstances, but this is an opportunity to show that the right treatment can work. The writers have touched on it a little with Peter referring to his therapy, but there are many more characters who clearly need treatment. I realize that neurotic and psychotic behaviour is more interesting to write about and to watch, but it sure isn't healthy, and when remedies are available it's foolish not to use them, so the writers need to find a way to include this. If the UK health system doesn't provide these services, and the residents of the street can't afford private treatment, that's also a topic that could be explored.

Good Idea, and David needs to go to the front of the queue and all!

I don't understand why Norris started calling himself a homeowner once Emily signed the papers; surely she still owns it and she merely left it to him in her will? It's reminiscent of the odd Platt/McIntyre storyline where David and Kylie were thinking of buying Gail's house, and then suddenly it was a done deal and Gail merely a lodger. How can the two of them generate enough for a mortgate on a house?! I wouldn't have thought they could buy a flat, let alone a house, and even though Kylie's missing a lot of work they don't seem too concerned about not meeting the mortgage. It feels very much like a step was left out -- same thing with Norris. It's not HIS yet. I agree that it doesn't make sense for Norris to worry about being homeless when he owns a business!

LOVE the comment about mental health services. Mental health stories haven't been handled well on the show, although Shelley's agoraphobia was realistic, as was the desensitization treatment she went through. Considering the high rates of anxiety, depression and other disorders, it would be nice to have a realistic and positive storyline to take some of the stigma away.

Emily really did sign the ownership over to Norris. Allegedly. Though I wonder if he'll end up passing it back over if it costs him enough money to maintain it. I really think she's got a small print out clause in there somewhere. I can't imagine she'd be so generous as to give him the house outright but it appears she did.

I agree, I don't know how David and Kylie were able to buy the house unless Audrey co-signed for them. At the time, Gail wouldn't have been able to.

What are the gift tax laws like in the UK? Where I live in Canada you can't just give someone (except a spouse) a house without incurring taxes.

I don't know about the gift tax laws, but i do know inheritance taxes are very heavy in the UK. They mentioned that he'd avoid those taxes by her signing it over this way rather than putting it in her will. Perhaps there are taxes but not as high?