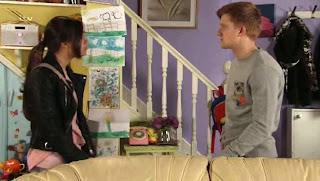 Watching Corrie this week brings me to mind how many idiots there were.

Chesney is behaving like an idiot. He's using Sinead because he really wants Katy but he won't forgive Katy either. That makes Sinead an idiot for going back to Chesney even though she keeps saying she won't be messed about by him. Yet she's continually letting him do it.

Katy is an idiot for falling for Ryan and Ryan is an idiot. He got way more than he bargained for after flirting with a pretty girl. He ended up with the pretty girl and the baby he knew she had. He didn't expect her to up sticks and leave Chesney and really didn't want the responsibility of a ready made family but he was too much of a spineless prat not to say anything.

Tim is an idiot if he lets Owen bully him into leaving town. It would damage Faye even more than she already is if he abandons her a second time in her life. I guess he's trying to do the right thing but he's not very good at it and not very good at parenting and continually puts his foot in it. Tim might also be an idiot for getting involved with Sally Webster. It looks like it's headed in that direction. Time will tell who the idiot is there. It'll probably be Sally for getting involved in with a weak, feckless fella yet again.

Paul is an idiot. He got himself into trouble at work for having a go at some kids who called 999 as a hoax. No, they shouldn't have done it and yes, he's right to be angry but unfortunately, letting his temper get the better of him isn't the way to handle it and now he could get into trouble over it. It's like the homeowner who gets charged with assault if he attacks someone breaking into his house. If it isn't self defence, you've got to suck it up and do it by the book.

And yes, this stress led to a thoughtless remark in the pub. He was an idiot for not apologizing immediately. He didn't and it escalated all out of control. Now he and Lloyd have both dug their heels in and neither one is going to back down. Paul should definitely be the first to apologize and if Lloyd then says he's sorry for calling Paul a racist, the mud won't stick to Paul with his friends' opinions like he thinks. I think Eileen is right, Paul feels stupid and embarrassed and I think that Lloyd does know that Paul didn't mean it but a lifetime of putting up with thoughtless remarks pushed one too many over the edge, especially in front of his daughter. He doesn't want his daughter to have to put up with what he has. So though they're both acting like idiots, at least Lloyd has more justification.

Nick and Leanne are both idiots not to see what David's doing. Especially Nick. He knows really well what David is capable of doing and how he's worked people in the past. Kylie is an idiot, too. You'd think she'd be able to connect the dots and realize David's playing Nick and Leanne off against each other even if she doesn't realize why.

Gail is a gullible idiot just because she is.

And finally. Norris is an idiot. I just wanted to throw that in there, just because.
Posted by Tvor at 12:38