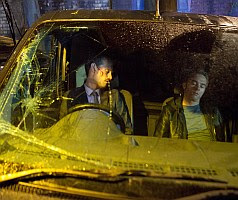 David's revenge on Nick hit the wall, pretty much literally when that huge truck slammed into the side of the van nearly killing Nick. That was a well done scene, I thought. David and Nick baring souls, with David's desperation causing Nick to lose control of the car momentarily. It all looked like it was going to be ok when Whammo! Now David's very, very sorry and guilty. Some might wonder if it's all crocodile tears. There never seemed to be any love lost between David for Nick previously, even before all this business about Kylie. David seems to resent both of his siblings but I guess it proves you can love your family, just not like them much at all.

Now the storyline lags a bit with Nick in a coma and everyone fretting. Leanne feels guilty because she thinks her phone call distracted him and she's worried sick about the long term effects. Gail is just out and out worried for her son and David's guilty because he *did* cause the accident. He wants Nick to be ok but he doesn't want Nick to spill the beans either so that adds the "scared crapless" element to it. Now that Kylie's had the baby, Gail's pressuring her to have a DNA test. Everyone knows but most of them don't know the others know and it's getting a bit confusing as to who knows what! 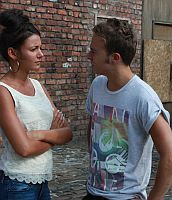 Then there's Tina in the mix. I'm of two minds about that. On one hand, if you knew someone was unfaithful and the paternity of a baby was involved, would you tell? Some people would feel very betrayed if you didn't and they found out later. But on the other hand, is it any of your business? Tina really isn't friends with Nick, Leanne or Kylie though she does maintain a relationship of sorts with Gail, her former step-mother but this doesn't affect her as much. How long can David stall Tina from shooting her mouth off? I get annoyed that she's making all these demands of David when much of me feels she has no right. I suppose this will be dragged on a bit longer until finally, everyone will know except Nick. He'll come out of the coma, that's a given. Will he turn into the nasty sibling due to brain damage? He wasn't all that pleasant before. If you will recall how he tried to lure Peter back into the bottle because he wanted Leanne back, then turning his nasty side out after all this won't be such a stretch.

Heartbreaker of the month was Hayley's cancer diagnosis. Pancreatic cancer is one of the most aggressive types, if not *the* most. She hasn't had her operation for the tumour yet so we don't know for sure if it's going to be terminal but the actress is leaving the show so it's a pretty safe bet. Roy better get a handle on his sleepwalking because even his mother has bailed and that isn't really out of character when you think about it. She's up and left abruptly before and Roy has said she is a coward. She got so close to Hayley that it's hard to imagine she would leave but the reality is, this was probably planned. The actress has said via Twitter that she was meant to leave soon and a death in the family prompted an earlier departure. It's too bad as Sylvia had turned into a really wonderful character. 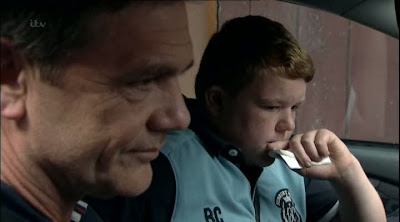 Now we know. Craig can place Karl somewhere he said he wasn't on the night of the fire but Craig thinks he's responsible for the fire and deaths of two people, poor kid. Karl is desperately trying to stem the tide of a 14 year old's guilty emotions so that Craig won't tell anyone else. Will Karl try to kill Craig before Craig does spill the beans? Craig doesn't know that he is actually a witness to Karl's misdeeds but he's bound to say something to someone. He just can't hold it in much longer. I don't know if Karl could kill a child, though so when it happens, it's going to happen quickly. The wedding may be on and off again at the moment but if it happens, I think that will be the climax and yet another interrupted wedding will be the net of the law closing in around Karl.

Stella is wobbling about the wedding due to Nick's condition but over the several years we've had her on the show, there has been mention of a few times in her past that she's declined Karl's wedding proposal, reluctant to commit to him due to various reasons, his weaknesses only being some of them. I suspect she's using Nick as yet another "out" clause even though this time it was she who proposed. It's logical at least to suggest postponing the wedding but she's seeing "signs" all over the place. Well, we all know she should run a mile but she doesn't. 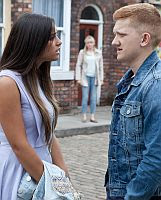 Chesney is still, as the Conversation Street podcast people have been calling him, "Ches Miserables" and appropriate it is. I have never been so bored with a storyline in a long time. He and Katy insisted on being together at the tender age of 16, far too young. They struggled to make ends meet and Katy decides, once she's out of school, that she wants a baby! Well they got what they wanted and it's even more difficult. Chesney is only selling on the market and I can't imagine that brings in a huge amount of money. Katy is bored. She gets her head turned by Ryan and it all goes down the pan. Ches can't forgive her, when all it was was a kiss for God's sake. Even when she comes crawling back, begging, he can't do it so she moves in with Ryan who was horrified, really. Ok, now Ches has a bit more of a mental image to fret over. He meets a nice young girl but keeps using her to get at Katy even though he says he doesn't want Katy. He even tries to take Katy back for the baby's sake but that doesn't work either. It's horrible, it's boring, it's miserable and it just won't go away. 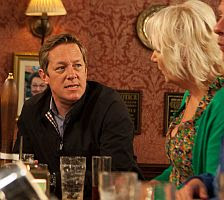 Paul and Lloyd got into a feud over a careless racist remark that Paul uttered. Supposedly it was a story about how people can be racist even when they don't realize it but to me it was all about ego and pride after the initial few days. Neither man would give an inch and their respective partners were caught in the middle. There's no denying Lloyd was offended especially for Jenna's sake and in the real world between two friends like that, the offender would abjectly apologize and it would be over. We didn't get that and we were subjected to weeks of endless glaring and shouting. There was one early apology but it was clearly not sincere and it took Paul stepping in to help Lloyd in a confrontation with a group of yobs to put it to rest. It took a toll, though as both Mandy and Paul left town leaving Lloyd and especially Eileen down in the dumps.

It's too bad. I liked Mandy and they could have done a lot with her but they didn't seem to know what to do with the character. They turned her into a cranky complainer. I liked Paul at first but it rapidly turned into dislike since he showed signs of selfishnest right from the point he was carrying on with Eileen with his confused wife in the other room. Yes, you might be in love but you have a prior committment. Eileen finally realized he never put her first and she's right though he often was in a difficult position. Should she have demanded he quit his dangerous job for her? No, I don't think so but if she couldn't live with it, she should have let him leave on that train, not run after him. She did try and I think was coming to terms with it until this last storyline just pushed things over the edge. She blames herself for picking yet another loser but really, I don't think any of this with Paul was really her fault. He is who he is. She wanted to be first in someone's priorities and it was evident it would never happen.

Tina had a rough few weeks after giving Jake back to Gary and Izzy and you can hardly blame her, especially with Mr and Mrs Insenstive doing things like having a welcome home party for the baby in the pub under her nose after the Bistro was unavailable. Anyone know the word "postpone"? Why did they not have one of those raucous backyard barbeques instead? She seems to have made peace with her decision and may get to be part of the baby's life. That's a good thing but will she be able to do it? Peter's given up the shop to Rob and Tracy who will probably make a disaster out of it. He's now so far under Carla's thumb he's probably taken on her fingerprints and yes, it hurts. Are we about to see him slide back into the bottle what with all the kicking his pride has been taking? Sally fancies Tim and sees him as her future. Tim fancies Sally and sees her as his friend with Benefits. Not going to end well.
Posted by Tvor at 10:28