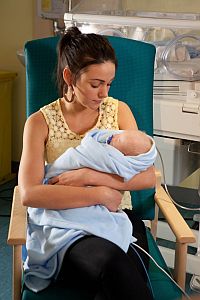 The surrogacy story has reached the twist that pretty much everyone knew was coming. Tina can't bring herself to give up the baby to Izzy and Gary. In a large part, she was overwhelmed with love for the baby and that's a natural reaction. In a small part, she sees Gary and Izzy fighting, Gary having made a pass at her. Now Izzy and Gary are at odds, perhaps with a cool truce for the baby's sake but Izzy not planning to forgive Gary any time soon. The baby would be brought up in a broken home full of tension.

While I can understand the pull of hormones, I think she's wrong to keep the baby. Legally, she's the mother and does not have to abide by her promise. I believe that even a written contract would not be legally enforceable and as far as Gary's paternal rights go, he only has them if she says he can. Legally she can give paternal rights to Tommy if she chooses. She and Gary were not married at the time of the birth. As for that broken home, she probably thought that a single parent would still be better for the baby than two parents split apart and at each others' throats while sharing custody. She's got Tommy on her side for the time being, but for how long?

Izzy and Gary may be at odds but they also have a family to support them and the child where Tina (and Tommy) have two old age pensioners. Tina does have a mother but she's never been in the picture and seems to have been totally forgotten altogether.

Biologically and genetically, that child is not hers, it's Izzy and Gary's. She promised. She took money (which is illegal aside from legitimate expenses). I don't recall if she signed a contract though there may have been some medical forms signed when she underwent the surrogacy treatments. Morally, I think she should give the baby to his rightful parents, as difficult as it would be for her.

It would have been too simple for the storyline to follow the planned route. Tina gives the baby over and looks sadly at the little family from across the cobbles when she sees them out and about. Having Tina keep the baby after all gives us far more drama and storyline into the near future at least. Everyone's upset, Tina stands alone. Even though Tommy and Rita have supported her, they don't really think she's doing the right thing, either. 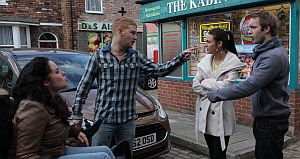 There is supposed to be a court hearing now. Whether we'll get that far is another question. Will Tina give in? Will the judge say, Sorry, the law is clear. She can keep the baby. That will cause further ructions, hate and screaming in the middle of the street. I guess we'll find out soon enough. I can't help thinking that in the real world, if this were to happen, Tina might keep the baby and then leave town. (Well, yes, I know that spoiler too, but that's a ways off yet with lots of angst and storyline that can unfold in the meantime).

I know there's been a lot of criticism about the storyline but I have enjoyed it so far even when, at times, I've been annoyed. Overall, I think it's been interesting and good soap fodder. What have you thought?
Posted by Tvor at 07:46