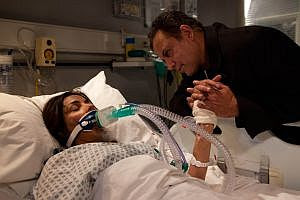 Dev has never been a character that I've enjoyed for the most part. He's too much into himself, mostly shallow, usually selfish and self absorbed. He's sexist and he also fawns over people. Some people find him funny to watch, some people don't find the character appealing but "love to hate" him. I never felt any of those things and more than part of the reason was the actor's performance.

I've always felt that Jimmi Harkishin's performance was very hammy, cheesy and over the top and aside from the occaisional decent scene, he always impressed me as not a very good actor. Maybe I was naive? Maybe he's a lot better than I always gave him credit for. Chances are pretty good that he's nothing like Dev which means his acting skill is better than you'd think.

That's often the case with most characters being very different from the actors that portray them. David Neilson comes immediately to mind. His transformation into Roy Cropper is astonishing. There are some actors, I've been told, whose personalities are not very far removed from their characters on the whole but most people are quite different from who they play. Most of the ones that play nasty pieces of work are really charming and lovely in person. I've heard that a lot about Kate Ford who plays Tracy Barlow (but I 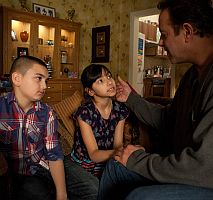 So is Jimmi Harkishin putting on a really good performance? I'm starting to rethink my former disdain. Since the death of Sunita on screen, Dev has been low key, more serious as you would expect from a man dealing with his own grief while trying to help his young children through it as well and not succeeding very well at the moment.

There are still selfish elements in Dev, like when he was surprised when Mary suggested that his children were feeling the same emptiness and confusion that he was. Good grief, man, your children have lost their mother. They're not sailing through these emotions and they're a lot less able to cope.

Still, that's typical Dev but he is trying very hard and his children's faith in their mother's innocence has spurred him into crusade mode to prove Sunita wasn't the arsonist that everyone thinks she was. That will put him in direct conflict with Karl, the real murderer.

My point is that Dev's storyline has been emotional, sent up a notch, and for once, Jimmi Harkishin's performance hasn't been putting me off. Often when he tries to portray high emotions, he looks very much like he's faking it and it just doesn't ring true. I do recognize that it's difficult for some actors to really convey that they're crying in an emotional scene, something he really doesn't do well. Still, I've been impressed with him in the last month or two as he portrays grief and anger and loss quite well.

I won't say he's been rivitting in his performance but I will say he's a lot more watchable than I've previously found him to be. Well done, Jimmi H. I shall watch the rest of this story unfold with interest.
Posted by Tvor at 13:44