I'm afraid I've neglected this blog during the month of May. I've been on holiday part of it and getting things sorted and catching up on Corrie the other part so it's really left little time for blogging aside from making notes for the monthly State of the Street so here we go with that!

Karl wants to marry Stella. After all these years, they've never got round to it. She figures they're in no position to do it but he wants to cement his cause, soothe his guilt. "After everything I've done for you" and she doesn't know the half! She caves and accepts. More fool her. But Leanne is the only one that's strenuously objecting. The only one with serious suspicions but though she and Stella have made their peace, they also don't have the history that might make Stella think twice and trust Leanne's judgement. 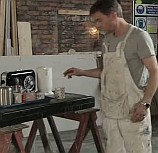 The push was on to get the pub ready sooner than later so Karl pitched in and worked for free. He warned them that when he's "grafting" he drinks his weight in tea. I reckon that's because when he's "grafting" that's all he's doing, making tea. One extra body and forget doing the upstairs living quarters for now and they did it on time.

So the pub is open. Do you like it? I do, the bricky red textured wallpaper is much nicer than the old stuff and the paler upholstery is a nice contrast though it's going to get dirty fast. I hope they stain-treated it. Karl also managed to get a load of second hand pub furniture and bar presumably. That gave the Rovers a nice lived in feel. Sadly the stained glass in the booths is gone but the replacement is nice, if not as much character. There's not a lot of difference aside from new upholstery and wallpaper and there's a new photo of Betty, minus the appalling Landlady plaque thank God. Thank you, new producer, for that at least. 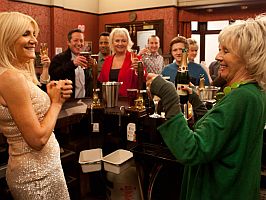 I am on the lookout for something orange in the decor of either the pub or the back room. The wallpaper sometimes looks orange but I think it's closer to a brick red. I think the tassle on the bell is orange, though. Why do I search?  Because during a studio tour earlier this year, I was told that when there's a fire, they always put something orange on the new set decoration. It seems to hold true at least with the businesses. Nicks and the bookies both have orange signs, Underworld has orange paint on the stair railings and the Kabin has orange and yellow wall tiling. The only places that have had fire that haven't got orange are number 13 (post-tram crash, now where the Prices are staying, owned by Kevin) and Sally's house (the fire was when Ashley and Claire had it).

Never let an event go by without something happening, though. Tina went into premature labour. All the stress, maybe? And after Katy hinted something to Izzy, she overheard Gary and Tina talk about the near miss kiss and she's pissed. I can understand it but I'm getting sick to the eye teeth of one kiss or not even that much wreaking havoc and relationship destruction. At least in this case, we didn't have to watch Gary freak out and stalk Tina and Katy for weeks on end, it came out fairly quickly. It was more obvious than an obvious thing, watching Gary freak out for a week  and though a few suspicions were raised, Izzy never found out until she over heard it.


Izzy wants nothing to do with Gary now, and won't even let him see the baby. She's gone way over the top. I can understand her feeling betrayed but legally, she has nothing to say about the baby anyway, not yet. Legally it's still Tina's and that could cause problems.  They showed a softer side of Owen through all this, with him being so worried about the whole sitution even if he's angry as hell at Gary but they ruined it by having him treat Katy like a 12 year old over the Ryan business. Some people have been speculating that the baby might turn out to be Tommy's but I don't think so. The clinic would have done pregnancy tests even just before they implanted. By that one fertile week of the implantation, Tina and Tommy were broken up so it's not likely she'd got pregnant during the previous month and they missed it. No. I'm sure it's Gary and Izzy's biological child. But will Tina be able to give it up? She apparently does have a legal right to the child until she signs it over even if it's not biologically hers.

Peter and Rob started off the month in a pissing contest over the betting shop. Tracy actually showed signs of being human for 5 minutes but that didn't last. I don't like Rob nor do I find him particularly good looking but I don't mind the actor in general. I think he's doing his job making me dislike Rob though his acting style isn't great, or maybe it is! 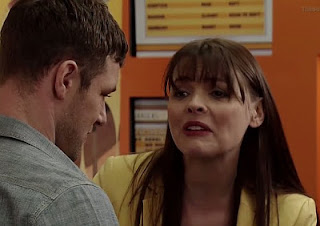 I do like Peter and Carla is growing on me and I like their characters as well as Leanne's so I always liked that triangle storyline. This new one was one I thought I'd hate because of the injection of Rob and Tracy and I did start out liking it, while it was in the bookies. But once Rob went back to the factory moaning about entitlement and engineering rip offs, I went back to hating it. I hope when Carla gets back at him for what he and Tracy have done, we'll get rid of him once and for all but chances are he'll whine again and she'll not send him to jail like he deserves. It's interesting that some of their back history is being explored, though.

Could Chesney be any more miserable, sulky and whiney? Could Katy be any more immature? Could Ryan look any more like a deer caught in the headlights? That is all. 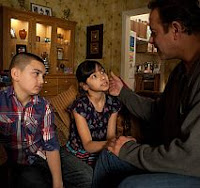 When I say it's nice to see Dev having a difficult time with his grief, I don't mean I'm enjoying it. I just mean that it's good to see them portray what it's really like and how it really affects people, both adults and children though with Dev, as usual, it was still all about  him. He even seemed surprised that Aadi might possibly be feeling as messed up inside as he himself is. Well DUH. Little boy has lost his mother and everyone thinks she started the fire. How do you think he feels? Children don't have the same coping mechanism.

I liked the injection of Mary into the mix, I think it's got potential and maybe can show her in a bit more sympathetic light. I don't like the injection of Stella who won't leave Dev alone. The reason for that is so that Karl can be under even more pressure, I know that, but I still hate it. She's got no business injecting herself into Dev's business but then injecting herself into anyone's business is nothing new to Stella. Dev accused Karl of causing Sunita's death due to his affair with her. He's right but he said he didn't mean to upset Karl. Stella probably hasn't thought of that either. I just hope that when Karl's misdeeds come out, we don't see a pairing between Dev and Stella. Bleurgh. 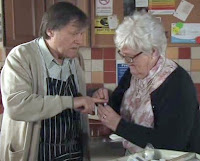 Roy has dealt with the rejection of his father from when he was a boy. He has managed to build himself a satisfactory life and put it where it belongs, in the past but the past came back to bite him with the delayed delivery of a letter from said father. But when he finally decided to find is dad, it turns out his dad has died and Roy is left with all those unanswered questions all over again. Roy doesn't deal with change at the best of times and he's really having a rough time with this one, much to his mother and wife's concern. This is the best storyline this month and has really given Roy and his mother some bonding from a new perspective. I love it! In fact it was probably the only thing I've been enjoying this month.

There's been little bits and pieces scattered through the month, most notably the return of David's epilepsy that nobody would speak of while worrying about him getting so tired and overworking himself . People wanted the writers to be politically correct and not have characters call the seizures "fits" but, folks, that's one reason Corrie feels so real. It isn't always PC. People really talk like that. Anyway. Now Nick also knows that Sally knows about he and Kylie and with the pregnancy advancing, it can't be long before the secret comes out. WWDD? (What Will David Do?) Being overworked and overtired made his seizures come back. What will the stress of finding out the baby may not be his do? Taking bets on complete epilepsy amnesia on the writers' part.

We've seen Faye living with her dad and finding out it's not quite all it's cracked up to be. He is not taking to the responsibilities of fatherhood like a dog to a bone, is he? Eileen and Paul stayed together but you know she's not going to rest easy any time he's at work. Sally's feeling lonely and looking to the internet. I hope they explore that a bit. I'd like to see Sally find a really nice bloke that way, not just end up dating nutters. Have you noticed, they've put Jenna and Sophie together and have basically abandoned them. Other than peripherally supporting Dev, there has been no sight of them, no loved up scenes, no storyline of how the vast age and educational difference affects them if at all. And no Mandy. Maybe now the pub is back open, we'll see her again.
Posted by Tvor at 09:46

Great blog! I was a bit curious though, about something you said in the teaser on the main Corrieblog site: I never minded the surrogacy storyline but now that Izzy, who doesn't have a legal leg to stand on, is trying to prevent Gary, who does have a legal connection, from seeing the baby, I'm currently disliking it a lot. How does Gary have the legal connection -- named as the father on the birth certificate? Surely the baby is biologically Izzy's and that must count for something? I imagine all of this would be a legal minefield and I'm surprised the clinic wouldn't want them to have something in writing.

I remember when they were meeting with the clinic at the beginning and they said that Gary would be the father biologically and of course Izzy would be the mother biologically but they said that legally, Tina was the legal mother until she signed the baby over to Izzy who legally had to adopt the baby. I would assume there was paperwork to all that effect. The money Tina has taken for it is totally under the radar though.