Will Steve and Michelle go the distance? 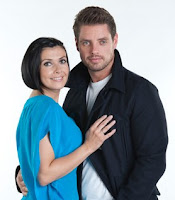 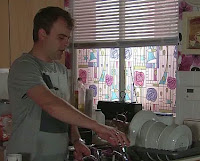 It's probably a no-brainer. Very few soap couples actually go the distance and if you're Steve McDonald, he of the 6-wedding record, it's very unlikely you'll ever find Ms. Right and reach your 50th wedding anniversary with her.

I think Steve and Michelle both are rebounding.  Steve got sucked in by Tracy's lies and lost his love, Becky as a result. Michelle didn't want to leave Weatherfield with Ciaran so she's at loose ends as well.


Michelle knows Steve. He's familiar. He's a nice guy. I can't help thinking that she's settling for Steve because of that, because she's lonely after hunky Ciaran left. I mean,  how could you possibly go from Ciaran to Steve? 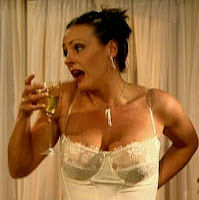 Ok, that's not really fair, I know. But I really never thought Michelle and Steve were suited the first time around and now they're giving another go.

Steve generally tends to go for bossy women, aggressive and stronger than him and somewhat on the trampy side. I think that's the classic case of being attracted to someone very like your mother and Michelle does have a bit of all that, though in a lower key than most of Steve's women. She's got a side of her that's not afraid to fight back, probably from having to hold her own against two brothers and growing up on a rough estate. But she's also needy and always seems to have problem after problem.

That dragged Steve down last time and it's starting already this time with her struggles over her drug addicted son. Mind you, that seems to happen to Steve with all his women. They drag him down and wear him out with their issues, crises and schemes that backfire.

Last time all the angst sent him into the arms of Becky who was a lot more fun, if also a lot more trouble but Steve always seems to thrive on the excitement until he gets overwhelmed.

Except for Tracy. That's a bit too much trouble.  But that's a subject for another blog post sometime. 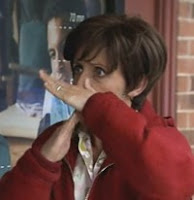 I think the main reason I don't like Steve and Michelle together is that they don't seem to have that chemistry. Steve and Karen had it in spades, so did Steve and Becky.  Steve and Tracy...not so much nor did he have any chemistry with that ex-mob wife Ronnie. She really was Trouble with a capital T.

To be fair, Steve is trying to help with Ryan. He does feel a bit step-fatherly to him because of playing that role last time around and I do think Ryan likes him. Steve could be a good support if he didn't keep running around in jealous fits and lusting after Michelle. He probably should have stayed focussed on helping Ryan rather than using it in part to get closer to Michelle.

I think Steve is very like his mother in one respect. Liz couldn't stay away from Jim, with his firey temper, his volatile ways and when she did find a nice, sedate man like Vernon (if also a bit feckless), she was bored senseless. Michelle has similar qualities to Steve's other women but she's also a bit more refined and mature, less volatile and tempermental unless provoked and I think Steve will end up bored eventually, if Michelle's non-stop crises don't push him away first.

Who was your favourite of Steve's women? Who suited him the best (until it all blew up, that is)? I think I liked Steve with Karen the best.