The character of Roy Cropper was only introduced as and expected to be a short term character in 1995. His character caught on and was kept in the show and has turned into one of the most-loved characters, half of one of the favourite couples in the show.

Roy did not have a very auspicious beginning, however. He lived alone in the top flat of a house conversion, bought by Mike Baldwin. He appeared to be somewhat creepy, drinking booze out of a paper bag and bothering Deirdre Raschid who was newly moved in to the flats as building supervisor. Roy quickly became more sympathetic, harmless, eccentric but a bit of a nutter, who was awkward, shy, socially inept but basically kind.


Over the years, Roy's background has been filled in a bit. His parents were divorced after his father had abandoned the family. The young Roy took this very hard but seems to have formed a bond with his granddad. He was a loner at school but very intelligent. He developed a love for trains and busses and could very well be called a trainspotter.

He has made a few remarks about his late stepfather, giving us the distinct impression there was no love lost between them and was the reason Roy left home as soon as he could. There have been whispers among fans and observers of the character over the years that Roy must have Asperger's syndrome, as he seems to have obsessive compulsive tendencies and takes most things at their very literal translation, missing subtleties and nuances.

When we met Roy, he was cooking breakfasts at the Imperial Hotel, which long time Corrie fans will recognize as the same place that Ida Barlow worked in the early 60s. He helped out in Jim's Cafe on occasion and when the time came that Alma wanted to sell her share of the cafe, Roy decided to buy it. Alma didn't think he'd come up with the money but it turns out he'd squirreled away cash for years, spreading it around several different banks for safe keeping. Roy was now the major shareholder in the cafe, and renamed it Roys Rolls. He moved into the flat and he and Gail chuntered along well serving behind the counter for several years. Roy once saved up enough vouchers to provide a free trip for two to Paris, but in his generosity, gave the trip to Martin and Gail. 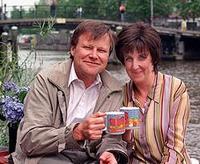 Roy became involved in a crusade to save the Red Rec but in 1998 his life was about to change dramatically. At the age of 44, he fell in love. He met shy and awkward Hayley Patterson who was a bit of an anorak herself. They shared many things in common, including an interest in trains and bus schedules. Roy was shocked, however, when he discovered that Hayley was a transexual. He didn't know how to handle this and backed off.

Hayley went to Amsterdam for gender reassignment surgery and Roy remained in Weatherfield, clearly miserable. Alma pushed a little and Roy finally went after Hayley. The visit was awkward but Roy managed to convey his feelings. Hayley decided to return with him and they've been together ever since. 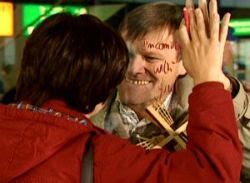 They were not allowed to marry, legally, back in 1999, but they managed to find a sympathetic vicar, Jessica, who was set to "marry" them in a blessing ceremony. Local oik, Les Battersby, alerted the press that "two blokes" were getting married and it nearly ruined the ceremony. Hayley retreated to the cafe flat but all their friends rallied and Jessica performed the ceremony in the cafe itself where Roy's full name, "Royston" was revealed.

Now... fans on the internet had taken to calling Roy this for some time and when the name was spoken on screen, many fans believed that the Powers that Be picked it up from the forums and boards and ran with it. There has never been any confirmation but fans are convinced they gave Roy his name!

Roy is loyal and once he's made up his mind to be your friend, or in Hayley's case, her partner, he stands by those he cares for, unwaveringly. He is honest, possibly to a fault, and is faithful. He is determined to do the right thing and is reliable. He has employed several of the younger crowd in the cafe over the years, including Toyah Battersby and Sarah Platt.

He and Hayley have often been at the pointed end of verbal barbs and have been the objects of ridicule but in spite of that, everyone knows that Roy is an upstanding and all around good man. Therefore, when it seemed that he had a drunken one night stand with evil Tracy Barlow, resulting in her pregnancy, the whole Street was shocked. This incident nearly destroyed Roy who felt his integrity and reputation were irreparably damaged. Hayley had left him and he felt he had nothing to live for. Luckily, Hayley returned to the flat and rescued Roy from an overdose and stood by him. 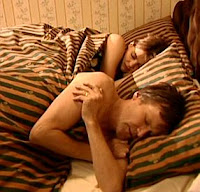 They decided to adopt Tracy's baby and paid her good money for it. Roy and Hayley had long desired to be parents. Initially, Roy was reluctant to be a parent, having had no good example and miserable memories of his own childhood but with Hayley at his side, he realized he had a lot to offer a child. They had fostered several children including Fiz Brown but got tangled up in well-meaning problems of one young lad and after running away with him, the trouble they got into as a result closed the door on any future possibility of fostering and adoption.

This could be their only chance to be parents. They knew that Tracy would be less than a stellar mother, Roy even went through with a sham marriage to Tracy so that he would have legal rights to the child but Roy and Hayley were devastated when the truth came out and the father of the baby was proven to be Steve McDonald.

When Hayley discovered that she had an adult son from a very brief attempt at normality when she was still Harold, Roy was unsure how to handle the news. Hayley had told him she'd been a virgin and when Christian came into her life, she kept it a secret. Honesty being extremely important to Roy, he couldn't seem to accept Hayley's actions and nearly lost her as a result of his misplaced sense of seeing everything in "black or white". His love for Hayley has allowed him to bend and before Hayley left to do charitable work in Africa, they reconciled their differences. Roy held down the fort at the cafe, missing his Hayley.

Roy was also intrinsic to Tony Gordon's downfall. When Tony had a heart attack, and thought he was going to die, he confessed to Liam Connor's murder to Roy. Roy didn't report him but needled Tony so much that Tony nearly killed Roy by drowning him in the canal. He saved Roy at the last minute and turned himself in but when he escaped from prison some months later, he tried to get his revenge on Roy by taking Hayley hostage. He relented and set Hayley free and after Carla freed herself from his clutches, Tony went up in smoke in the factory, leaving Roy outside, embracing Hayley. 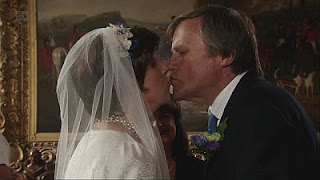 Life is too short. And Roy realized that, financially, it would be better to be married now that he and Hayley could legally tie the knot. His unromantic proposal didn't go over well, as you can imagine, but after the factory incident, he realized how much Hayley meant to him and proposed properly with a proper wedding to celebrate their love in the fall of 2009.

Since then, they've been chuntering along together in the cafe, supporting their friends and neighbours after the tram crash and its fallout. They have faced another new obstacle in the form of Roy's recently widowed battleaxe mother. Roy wanted nothing to do with her and Hayley wants everyone to be all "happy families". Little by little, Sylvia and Roy seem to be creating a relationship though both continue to exasperate the other. I think Roy may have discovered a little more about why his mother was so distant with him and Sylvia is finally growing to appreciate her son and his eccentricities.

Roy blossomed under the love of a good woman and slowly over the years, the cafe decor has become a tribute to his love of trains. He's still being an advisor for young lads, Chesney Battersby Brown being the most recent. His and Hayley's faith in Becky has helped her turn her life around. He hasn't lost his integrity, and still has moments where he seems totally flummoxed by others' emotions and actions. When Mary Taylor developped a clearly obvious crush on him over the chess board, Roy was completely oblivious. When Hayley found out, in typical Hayley style, she lashed out but then persuaded Mary to stay in Weatherfield, finding sympathy for a lonely woman in a motorhome. I think Roy was secretly flattered that someone new would find him attractive (in his own way!)

Roy Cropper has a very kind side to him. He may not be outwardly in his affections but has done and said many things that have the viewer swallowing a lump in their throat. He is steadfastly loyal when he believes in someone, even if that someone, like Becky Granger McDonald, gives him reason to doubt. He supports the younger people and has earned the respect of those such as Fiz, Chesney, Gary and Izzy and even, grudgingly, David Platt! He has fears and insecurities but his rock, Hayley, can usually put them to rest with her faith and love and support.  He's got a pretty good idea about who he is and seems content wtih his lot in life these days. He tries to find the good in any lost soul. 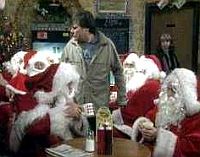 Roy Cropper has touched many lives and made them better for it. He is played with impeccable, understated perfection by David Neilson and could not be more perfect for the part!

Long may Roy reign over his rolls!
Posted by Tvor at 14:43

I don't think I would really call Roy loyal: there's been quite a few times that his strict code of honesty and logic and seeing everything in black and white has pitted him against Hayley and Becky.He doesn't simply support his loved ones just because of who they are, if it would mean going against his principles.

Good point, but he certainly does step up and defend the ones he loves and always comes round to realizing when he's gone over the line with his principles.

If you're a Roy Cropper fan like me you'll love this app where you can become Roy Cropper by uploading an photo of yourself and it puts it over a caricature of Roy Cropper. It's called Cropper Yourself, haha... It's trending on Twitter click here