Cheering for a Lloyd Storyline

I've always liked Lloyd Mullaney. He's always been a cheerful sort, most of the time,  unless life hurls a zinger at him. He's funny, he's loves music, he is kind, he's a good friend. He's also not had a lot of storylines of his own over the years but always seems to shine in the ones he does get.

Craig Charles really has grown on me as an actor since he started. I never watched Red Dwarf so I really had no previous knowledge of him but as far as I know, that's the main thing he's been known as and nobody really thought he'd work as a Corrie character. I think he's proved them all wrong. He's also shown he can do drama in addition to comedy.

Some of my favourite of those types of scenes/storylines were first when he and Liz broke up and later when he and Cheryl broke up. You don't often see men being reduced to tears over heartbreak. They usually get angry, get drunk, shag someone else. Lloyd barely kept it together, especially after Cheryl left and it was a refreshing take on the situation, for a soap. I don't think he was "wimpy" in the least for showing his emotions though I've heard that accusation from other quarters, usually from men. Lloyd was also wonderful when he was interacting with children, such as Finley Morton and Russ Gray. He's got such a big heart and has always wanted to be a dad and now he's finally got that wish. 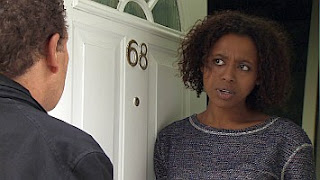 Lloyd has discovered that he's got an adult daughter, a result from an affair he had 29  years ago. While I am rather disappointed that he did the dirty on his best friend, it has brought Lloyd to the forefront again. So far, he's only just discovered that Jenna is his daughter. Her mother, Mandy, is enraged that Lloyd pushed and pushed and found out the truth and is upset that Jenna overheard it as well. Jenna, naturally, is horrified and feels she has lived a lie all her life. She wants nothing to do with Lloyd.

We know that will change. It's a soap, come on! There are rumours that Mandy will remain in the show and be the new Rovers' cook and I do hope that's true because in spite of her being a bit mardy and prickly so far.  I think she'll be a great character and I love her wardrobe! Maybe she and Lloyd can rekindle their romance though at the moment she's still grieving for her late husband. 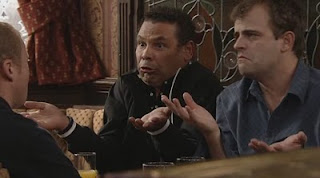 I also really love that Eileen is back in the cab office and is back in Lloyd and Steve's lives as all three were such good  friends and support for each other. They were missing that element while she was elsewhere and she barely had any contact with them at all which isn't realistic.  Even while working elsewhere, you'd think they would have interacted at the pub and helped each other through crises when needed. When Cheryl broke Lloyd's heart, it was mostly Steve that was there for him, as well as Becky but Eileen barely gave him a glance most of the time.

I think Lloyd's character has been well developed over the years and he remains one of my favourite characters.
Posted by Tvor at 12:28