I have to say I really didn't see this coming though I should have.

I didn't think that Katy would end up carrying a baby for Izzy in the end. I thought it would probably come down to the cash. It's so expensive and neither of the couples has any money. Katy doesn't have a job, Chesney sells dog collars on the market, Gary works with Owen as a builder and Izzy sews knickers. I thought there might be an outside chance that Katy carries the gene for the syndrome that Izzy has and that might come into play but my money was on the cash. So to speak.

Now it seems that Owen does have the cash but he's not willing to part with it to give Katy the opportunity to give her sister a baby but he is willing to donate it so that Izzy can have the baby she wants, just with a different surrogate mother. 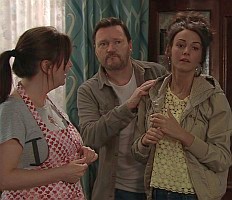 Her boyfriend Tommy owes Tyrone big bucks and he was working several jobs to try to pay him back but he's going to be injured in a car crash and won't be able to work. The debt is hanging over their heads. Owen is offering money to the one woman on the Street who really needs it and it looks like she's going to consider it. Why didn't I see that coming? It does make sense, doesn't it?

Tommy's not going to be too happy, though I reckon he'll come around in the end. Will she be able to get pregnant the first time? That's £7,000 PER SHOT, as it were. Owen isn't made of money.  Will she be able to carry the baby full term? Will we end up with yet ANOTHER sprog on an already crowded cast of under-5s?

Some have said this storyline is very unbelievable. I don't think it is, necessarily. What's wrong with Katy and Izzy, Chesney and Gary exploring the possibility? Family members certainly have gone this route for each other so it's not out of the realms of possibility. Is it probable in this case? Not likely, because, as many have pointed out, none of them have the money, and there are a lot of huge road blocks in the way to make it more difficult.

For once, I'd like to see the storyline play out but not with a happy ending. It's a soap, it's allowed. I don't want things to work out for them. I think there are more than enough little sprogs on the street now. We don't need yet another one. I can understand Tina making this huge decision to help Tommy. He won't be happy with it. Will he find some other way to stop it happening? If she's only doing it for the money, will someone else step up to the plate and lend it to her? Rita's been known to do that for Sally and Kevin, why not Tina, whom she thinks of as a daughter/granddaughter/great-granddaughter?

I have to agree with you. I think it's one thing for your sister to be your surrogate, or to have a vetted 'stranger' with psychological testing, counseling, and the ability to keep things in perspective etc. Broke Tina, who works over at the Rovers and keeps an office neat, who will be on the street for forever looking at you and your kid, and is known to have a temper, may not be the best choice!