No more babies on Corrie, please 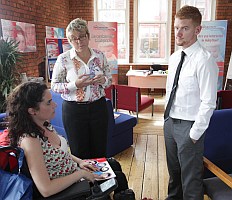 We're heading into another baby storyline. Izzy recently miscarried and decided she didn't want to risk a pregnancy but Gary really wants a baby. They're about to investigate adoption and were told that because of Gary's criminal record, they will not be qualified.

That's a direct turnaround. Have the writers forgotten that Becky and Steve, both holders of criminal records, were told that it wouldn't necessarily be held against them? They were turned down in the end but there was no particular reason specified and that wasn't it or they'd have never got as far through the process as they did. And I'm pretty sure it was mentioned that Eddie Windas had a record, anyway.

So, ok, they're looking at adoption and then the prospect of surrogacy comes up with Katy offering to carry the baby for them. I say no. And it's got nothing to do with Izzy's health or criminal records or any other objection on screen or off so far. My objection is that there are too many children and babies on Coronation Street at the moment.

There are always a few, so that as the show progresses and the children grow up, there can be a new generation of characters (if the show lasts that long!). But currently we're almost overrun with the little blighters and I think we're more than reached our limit.

Let's examine the current roster, shall we?
School aged kiddies: Max, Asha, Aadi, Simon, Amy, Faye, Craig though the last two are a bit older than the first group, but they're still attending Bessie St. I think, yes?
Babies: Liam, Jack, Joseph, Hope, and Kirsty's pregnant and due soon. 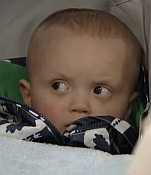 I don't think I remember ever having that many little ones on Corrie, do you? This leads me to believe that I don't think this baby will happen.

As an aside, while writing this, it occurred to me that Leanne could be the next one up the duff, with a baby by Nick which would make up for the one he insisted she get rid of when they were first married. And there's a possibility that Carla could be pregnant when she returns. (Oh gosh I hope not!) Again, I'd object on the above mentioned overpopulated cobbles.

Email ThisBlogThis!Share to TwitterShare to FacebookShare to Pinterest
Labels: characters

Totally agree with you, how long before they open a child care center on the street so everyone with a young kid can go to work full time to support them all.
You would think that the cost of child minders for all those babies and the extra time it takes for filming the episodes would make Collinson realize that it getting out of hand and should be cut back

A pregnancy makes for a dramatic storyline; we can have questions of paternity, dramatic births and so on, but then, once the baby is here, frankly it's far less interesting. If anything, having a baby around kind of drags the other characters down. I don't like the idea of Gary and Izzy going down that route; they're too young to be have their futures (and storylines) restricted in that way.

I agree far too many pregnancies (80% of them are unplanned) I can't believe how adults in this day and age can have so many unplanned pregnancies. Especially Tracey that storyline was completely ridiculous. Dev should stock up on condoms in his shop.

Actually, some months ago Beth said Craig was 13, so he'd be at Weatherfield High. In real life, actor Colson Smith is about the same age and attends Castleford Academy, near Wakefield.

According to http://coronationstreet.wikia.com Faye was born in 2002, so probably has another year to go at Bessie Street. Ellie Leach was born 15 March 2001, so will likely be starting secondary school next week.

How about Julie opens a daycare in the building where terry duckworth wanted a bar? She can't have kids and loves them...