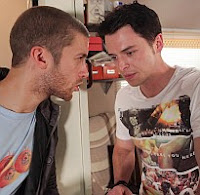 Ryan. Drugs. Dull. I don't care. But I'm also very glad that the rumour about Sophie getting involved with it wasn't true. Ryan is a liar and a manipulator and a tosser and a toerag and what else can I think of that's unflattering on a family-oriented blog?  He sucks everyone in, even Steve who needs to keep his mother sweet. I hate, hate, hate him! I know, I know, we're not supposed to like him. Good thing, and all.

This surrogacy storyline isn't going to be as straightforward as it seems. It was a nice gesture and in a perfect world, Katy would be an ideal candidate. She's young and healthy and has had a healthy baby already. But it's very expensive and even with Owen pouring poison in Chesney's ear to get him on board on his side, it may all come down to the cash. Owen certainly isn't going to hand over money if Katy's going to be the bio-mom but maybe he might if there was someone else chosen. Hey, maybe Kylie would go for the dough! or Fiz? I bet Beth would do it in a heartbeat. It also occurred to me that there's another young woman on the show in dire need of cash input and it seems I was right. (Spoiler) 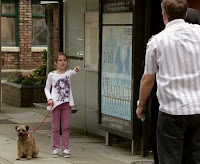 Jason and Maria, part 2? I can't see it lasting for some reason. Maybe she's settling for Jason because she can't have Marcus?

Michelle and Steve, part 2? I can't see that either. They never did suit but again, nothing else to do with Steve I guess. It *is* a good storyline having Steve trying to look out for Ryan. It's just too bad he has to be involved with Michelle at the same time. He was moaning about blowing it with Michelle but five minutes ago he was hollering at Tracy that he still loved Becky. Rebound much?

I don't even think it's all about Steve and Michelle, I think it's all about Tracy, yet another go around with Tracy lusting after Steve and Steve lusting after someone else and giving Tracy mixed signals when he KNOWS what she's like! It's pretty clear that the powers that be don't know what else to do with Tracy, as one dimensional as she is. It's old and it's boring. Get rid of her or give her something new to do. And no, making her use Ryan as revenge against Michelle isn't anything different. 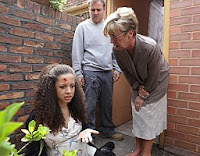 The domestic violence storyline has moved along.  It's so painful watching Tyrone blame himself for Kirsty's violence and blaming her hormones. She needs to remember, he's lived with a pregnant woman before and she didn't beat on him.  But it's been done in a very realistic way. After a few more incidents and Tina finding out accidentally, Tyrone and Kirsty argued and she stumbled and got hurt and now Deirdre, at least, thinks that Tyrone is the culprit. Well, that's the usual way of it so that's what people would think by default.

Kirsty left Tyrone but was persuaded back in the end by Tommy himself and Tina finally admitted to Tommy what she knows and Tommy has admitted to Tyrone that he knows after Tyrone injured himself. Tommy, bless'im, assumes Kirsty was at him again and tried to defend his best mate. Tyrone and Tommy are now officially on the outs. It's too bad that Kirsty is managing to push all Tyrone's friends away (though that, too, is a typical move in these situations...isolation), he's going to need all the support he can get.

This storyline is really, really well acted and thought out, I think. Although it's a grim subject, it's a rivetting storyline. Again, and I can't say this enough, major kudos to Natalie Gumede and Alan Halsall!

What's all this palaver about Karl's debt being Stella's and now it's Sunita's? Karl's debt is Karl's and isn't anyone else's responsibility. If he'd used the pub as surety against something, yes it might be Stella's. If he used a credit card with both their names on, then yes, some of it might be Stella's but the whole debt isn't and it certainly can't be transferred to Sunita but Karl is willing to bend to Stella and he signed his share over to her anyway. Eva getting Karl fired was well out of order, as well. Doesn't matter what he's done, she had no business getting him fired. She lost a boyfriend over it and she should have lost her job.

It's really clear that Karl doesn't want to be with Sunita and he didn't have anywhere else to go. I don't even think Sunita loves him though she thinks she does. He was a way out of her marraige and it's a crush or infatuation. She's really going to hit bottom hard when it all falls apart. Playing petty games like drinking in the Rovers in front of each other and canoodling with tarts from the cash and carry is just childish. So is taking money from the joint bank account to finance a dodgey business deal. Stop it. Grow up. Get on with things. It's clear Karl and Sunita aren't going to go the distance. Should the two couples reunite? It's a soap, at least one probably will, if not both.

Roy survived Mary's infatuation. He was completely oblivious to it though Anna clocked on what was happening and Hayley went for Mary in a jealous rage. Well, I say rage, it was more like a snit but that's a emotional as Hayley gets. It was a nice storyline, though. Nobody expected that Roy would ever be unfaithful to Hayley and it showed Hayley's insecurities bubbling up. She trusts Roy and trusts their love but clearly still has a frisson of fear that Roy will prefer a "real" woman if she throws herself at him. Sometimes you just can't help yourself when those old insecurities haunt you.

There were some lovely scenes where Mary bared her soul to Hayley, admitting she knows what people think of her and was so happy that Roy didn't see her in the same way, "Scary Mary". Hayley was the one that persuaded her to stay even thought Norris was clearly upset that she might leave. I don't think Norris has any hidden "love" for Mary but I do think he considers her a very good friend.
Posted by Tvor at 09:07

Although I dislike the Kirsty/Tyrone pairing, the acting is SO good.... but I'm still hoping the baby ends up not being his and Kirsty and child hit the road.

Yes they're obviously not suited But then he always did go for more aggressive women other than Maria. Fiz and Molly were both bossy (though of course not violent)

A fabulous wrap up of the last few weeks, Tvor. Natalie Gumede and Alan Halsall have been brilliant throughout and the writers have done a nice job building this story ever since Kirsty came on the scene last year. It will be interesting to see how things transpire once the baby is born. I wouldn't like to see Kirsty leave because her character is so multi-layered, unpredictable and brilliantly portrayed. Despite her actions and huge faults, she has my sympathy.

I wonder if the surrogacy will ever go ahead. If Katy had gone through with it, the whole thing would be tidied up quite nicely assuming the financial side of it could be resolved. By involving another character outside of the tight knit, yet often turbulent, Windass/Armstrong clan things are bound to get complicated. It doesn't seem that long ago since Gary was fighting with David about Tina! Whether the surrogacy does go ahead or not, it will be interesting to see where the writers then decide to take the characters of Gary and Izzy.

Thanks for your brilliant posts; they're always a joy to read.

Thanks for the lovely comments!