What's next for Steve and Tracy?

Tracy Barlow is not my favourite character. I would imagine that most people feel the same way though there may be a few people that "love to hate" Tracy. I just flat out hate her and I wouldn't be upset in the least if she were to disappear again. I don't like dumping on actors but I never found Kate Ford's acting skills to be much more than two dimensional. There isn't a lot of depth but I will also admit, in the last few months, she's not been as difficult to watch as she used to be.

This is not to say that Tracy is any more sympathetic. No matter how much they may try to show a vulnerable side to her, she's a detestable person. She may love her child but she's too selfish to be a good parent. She uses her child for whatever means necessary, usually to try to interfere in Steve's life or as emotional blackmail to get one or both of her parents to do something. We never see her hugging Amy, or being tender to her either, do we? A few people felt bad for her when she lost the twins but she was more upset because she thought it meant she'd lose Steve and she showed that she hasn't really changed at all by accusing Becky of pushing her down the stairs. 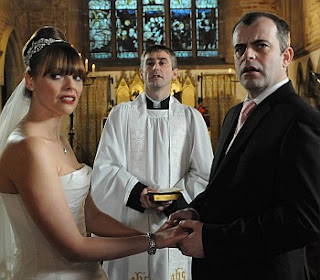 As the Chinese proverb goes, be careful what you wish for, you might get it. She wanted Steve McDonald most of her adult life. She got him finally and it blew up in her face because her scheming and lying came back to bite her. Leaving them married might have been Becky's spiteful revenge but where does it leave them now? Steve can't get an annullment because she refuses and he'll have to wait a year to apply for divorce. Surely you can get a divorce quicker with cause but I suppose he can't afford that and to be sure, Tracy would take everything she could.

Steve has had the blinders pulled off brutally and is back to hating Tracy. Tracy seems to be biding her time,  still hoping she can win Steve around. Please, powers that be, don't let him knuckle under to her!!! He only deluded himself when she was pregnant, wanting a family and the new babies. He's already proven he can be a good father on his own. Tracy will never give Amy back to him as long as it means she's got a hold over him. So what's next?

I'd really like to see Tracy find a new man, someone to really sweep her off her feet but I really can't see that happening because even if she puts on a good first impression, her real personality is bound to come crashing through eventually. She's destined not to have a happy ending but we could see the back of her if she rides off into the sunset in a black cab with some bloke, leaving Amy behind with Steve. In an ideal world. It's more likely she'll do something that will land her back in jail which would be more fitting. If that happens, this time the conviction has got to be rock solid. 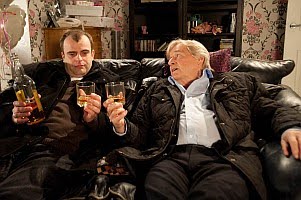 And as for Steve? I think he needs to give up weddings. Seriously. Six weddings to four different women. (Two to Becky, one that didn't actually go through and two to Karen) That's a Coronation Street record. Gail's second up with five weddings to four men and Deirdre has had four weddings to three men (with Ken having four weddings to three women). Steve either has to find the right woman or give it up, become a single dad and a monk. Yes, I know, that'll never happen. His problem is that he keeps getting involved with women who are very similar to his mother, hot tempered, stubborn and volatile. He's very much like Liz in that he likes his partners to offer a bit of danger, and excitement. Someone like Michelle was too boring for him even though her life was a depressing nightmare while they were together (children mixed up at birth which seems to have been forgotten thankfully, siblings dying, you name it.).
Posted by Tvor at 12:20

I just want rid of Tracey whether she goes back to jail or rides off into the sunset. She has no redeeming qualities whatsoever she uses everyone around her for what she can get out of them. Has she ever held down a proper job? Ken and Diedre need to stop enabling her and kick her to the curb.

I totally agree with you about Tracy. I just wish Becky had stayed around. She was great! Not only for Steve but the show as well. I feel like we have lost too many great people over the last few years.