The life of Tommy Duckworth 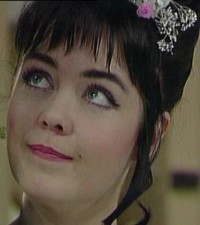 Now that Terry Duckworth is back in Weatherfield and becoming aquainted with his son, Tommy, let's have a look at Tommy's history.

This is Tommy Duckworth's mother, Lisa Horton on her wedding day to RTerry. Terry brought Lisa home to meet his mum and dad in 1992. Lisa was already pregnant and Terry was going to be charged with GBH. Jack and Vera took Lisa in. Her parents, Jeff and Doreen, lived in Blackpool but didn't approve of Lisa's choice in fellas (would you?) so she preferred not to go home. Terry got sent down for 2 years but they organized a wedding so they could be married before the baby was born.

Here they are on their wedding day. Just before all hell broke loose. You see, Vera thought it was cruel for Terry to be handcuffed to a police officer while he was being married and after, out on the church steps she persuaded them to unlock the handcuffs for a couple of photos. Terry took the opportunity to run, telling Lisa he loved her and off he went. 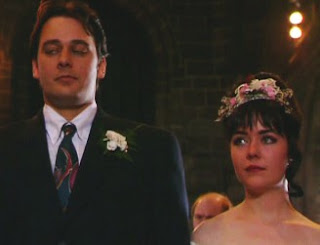 The police suspected Vera was in collusion with her son but we know she was just as silly, sentimental, soft-hearted woman. Terry was caught eventually and banged up and Lisa stayed in Coronation Street rather than live with her disapproving parents, giving birth to Tommy on September 9, 1992 with Vera by her side. 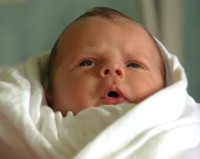 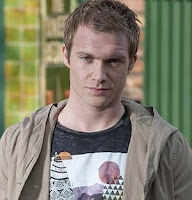 Awww, wasn't he a cute baby? It wasn't long before things went wrong. Lisa struck up a friendship with neighbour Des Barnes which Vera thought was wrong even though nothing was going on. She let it slip to Tommy who called some mates and had Des beaten up. The penny dropped and Lisa realized what Terry really was like and wanted nothing more to do with him. She and Vera fell out and Lisa took V's beloved grandson home to her parents in Blackpool. Des soon followed her there and told her how he felt about her. She moved back in to his house, much to Vera's horror.

Vera thought it was very wrong of Lisa to take up with another man. She was still married to Terry and Terry was that little baby's dad! 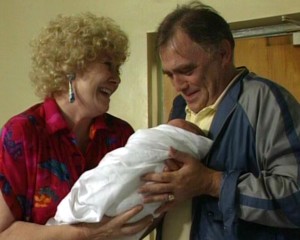 Sadly, a mere few months later in February 1993, Lisa went out to buy a bottle of wine. But when she ran across the street, a speeding car hit her. Terry was allowed to see her in hospital, cuffed again to a guard of course and rowed with Des over her bedside. She died of her injuries and Terry was carted back to jail. Jack and Vera insisted on taking Tommy home. Vera quit her job at Bettabuys to raise her grandson for Terry until he was released in spite of the financial hardship it caused.

Terry had other ideas. Pretending he thought raising a baby at their age was too much for them, he gave custody to his in-laws, Jeff and Doreen, but the Duckworths found out that the Hortons paid Terry to have Tommy, something they couldn't afford to do. In effect, Terry sold his son to the Hortons. Vera's heart broke and Jack, furious at his son, knocked him over and disowned him.

A few years later, Terry brought Tommy back but only because he tried to get more money out of the Hortons and they weren't having it. It didn't last long. In the end the Hortons paid Terry 10,000 pounds and he signed a custody agreement. They were to raise Tommy until he was 18.

Jack and Vera visited Tommy in Blackpool many times over the years. We saw young Tommy again during one of their visits in 2000. We heard nothing until, in 2011, Tommy turned up on Tyrone Dobbs' doorstep, looking for Jack. He knew Vera had died but he didn't know Jack had as well, because he'd been backpacking around the world and hadn't been in touch with his other grandparents much. 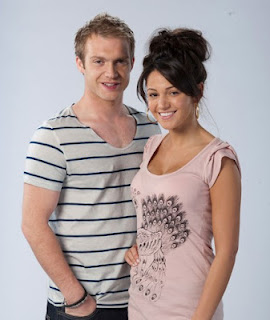 Tommy moved in with Tyrone and Ty took him on at the garage, first as a valet and now he's training Tommy to do some mechanic work. Tommy dated Amber for a little while but he's fancied fellow housemate Tina since he met her. Tina has finally come around and they have found a mutual attraction. They both united in distaste and suspicion over Tyrone's new girlfriend Kirsty who's managed to get them both out of Number 9. They both share Jason's flat over the Kabin, with Jason living there as well for the moment.

Terry is back and Tommy wants to believe the best of his father for the moment. We all know that's going to go badly wrong. Terry will end up getting Tommy into all manner of trouble and will end up betraying him, probably running off with Tommy's inheritance from Granddad Horton. I think Terry's return is meant to cement Tina and Tommy's relationship. I don't expect Terry to be back for long.

Tommy seems a nice enough lad, though still young and a bit immature. Not quite as feckless as Jack was, but he's always up for a scheme or a good time. Tina is gobby and rude and often speaks before she thinks. I wonder if they could be the next version of Jack and Vera? Alas, in this day and age, young actors don't stay with a role for 20 or 30 years like they used to. There's so many more opportunties so very likely we won't be seeing this couple around long term. It's too bad. They seem well suited at the moment. It will be interesting to see how their relationship develops.
Posted by Tvor at 08:43

Very informative- Thank you so much for this post

Thanks for the recap. I've been watching Corrie since Tommy was born but had forgotten all about Lisa and Des.