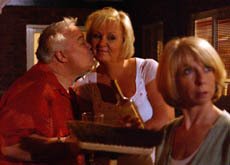 Over the past couple of years we have seen a few more short term characters played by well known actors, both British and American. Sometimes a permanent cast member has also been fairly well known from previous tv shows and soaps. It seems to be getting a bit more common and the media seems to be overrun with celebs of various notorieties who proclaim they want to be in Corrie, too!

There have been mumblings and grumblings about this. Some people are not happy that "Sinbad" from "Brookie" turned into Jerry Morton on Corrie. A lot of people can't separate Cindy Beale from Stella Price. With the news that actor Sue Johnston might join the Street as Stella's mother, the peanut gallery has been tsking again.

I know that when you are familiar with a face in one show and they've been established in that show for awhile, you do tend to identify the actor with their previous role. It takes awhile to drop that image and accept them as a totally new character. It's even more difficult if the previous character was one you disliked! I'm sure it's hard for the actors, too. They probably feel typecast and want to shake off that old character and try something new but it's not always easy to convince the public that you're a manipulative murderer this time around or, alternatively, you are not going to drive your new family into the canal!

There are some actors that never manage to shake off their most famous character and you don't hear much from them ever again once they leave their show and some are lucky to create a second iconic character elsewhere. It takes talent and not everyone has that high degree of it to make the public see them with new eyes. Arthur Lowe portrayed Leonard Swindley on Coronation Street in the early days but is equally and perhaps even better known for his role as "Captain Mainwaring" in Dad's Army. Jean Alexander is forever Hilda Ogden but she's also Auntie Wainwright from Last of the Summer Wine for a great many people. Nobody thought Jean would ever shake off Hilda's pinny and rollers but she did. Corrie fans may argue the point.

Anne Reid has made a very successful career for herself after leaving Coronation Street and Val Barlow behind. Suranne Jones is doing very well after becoming known as Karen McDonald and Sarah Lancashire is also very successful. I've no doubt that recent departee, Katherine Kelly will shine as well.

On the same note, when one actor has been so well established as one character, it's rare that a show can successfully recast the role with someone new and have them be accepted by the viewers. You could never replace Betty Driver as Betty Williams with anyone else. The same goes for many of the long term cast members such as Helen Worth, Sally Dynevor, Michael LeVell, David Neilson or Julie Hesmondhalgh. Child characters can often be recast without too much fallout and even a younger character can often work with a new face. 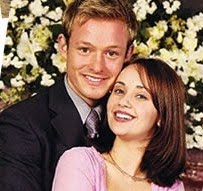 Coronation Street has often recast child actors as they grow up and decide they want to leave the show or ITV decides the character needs a different actor for more adult storylines. Peter Barlow has had many faces and we're on our third Nick Tilsley. I for one think Ben Price does a fine job and am very relieved Adam Rickett wasn't brought back! Can anyone really picture Tracy Barlow as anyone other than Kate Ford now? Dawn Acton did a fine job as Tracy as a stroppy teenager but Kate Ford has made the role her own. Do you think Rosie Webster or Sarah Platt could return with a new face? I think they probably could, especially if some time has passed.

Being from North America, and having been a soap watcher from way back, I'm used to actors jumping from gig to gig. I'm certainly guilty of seeing a new character on one soap or tv series and connecting them with a character they were well known and loved for on another. They're actors. This is what they do. Very few are like William Roache who spend almost all of their career as one character.

Casting of "celebrities" or really famous film actors has also been a bone of contention at times. The recent stint of well known Hollywood actor Robert Vaughn came under a bit of fire but he suited the role and the storyline admirably. The short term role that Sir Ian McKellen played in Corrie as the dodgey writer Mel Hutchwright was wonderful and one of the best "guest star" roles ever! I don't think it's something that they should do all the time, but once in awhile, or the occaisional cameo in a scene in the Rovers or Kabin makes it special, something to look forward to for me.

My point is this: Why shouldn't a new character or returning character be cast with a well known face? If they are being typecast as the same sort of role, for instance, a villain or a do-gooder, then it's not going to work as well but if the actor is good at their craft, and the character is different enough from the former one, you'll soon put their previous persona to one side and accept them as their new one. Even better if it's an actor you like and respect.

A well known face as a new or replaced, short or long term character? Bring it on!
Posted by Tvor at 11:09

Also Norman Wisdom. But he still tripped waking up the street!

What I don't understand is that Michelle Collins hasn't portrayed Cindy in years. Hasn't more than a decade passed by? I could understand if it hadn't been that long of a time, and she does seem to be portraying a very different character from the manipulative bitch she was associated for years!

Some actors and actresses are very fortunate to be able to either play iconic roles for years or to be remembered for one character regardless of how many other acting gigs they have in their career. Not every actor or actress gets that opportunity.

One would imagine that some guest roles are intended for the actor(s) that portray the role. To get actors such as Sir Ian McKellan or Robert Vaughn are coops, especially as prior to their casting one may think that they felt that they may be 'above' Corrie. I'm sure that many British actors and actresses would like to have a role in their favourite soap but for many reasons it will only ever be a small percentage. It's not as if the whole cast is suddenly going to be recast with well-known faces, but every now again when they bring in new blood, why not? There's obviously something that Phil Collinson saw in Michelle Collins over every other actress that auditioned for Stella, and likewise for every other actor and actress that's been casted.

And I don't remember there being any hubaloo about Stephanie Cole being casted as Sylvia, nor could I imagine anybody else on screen as her!

I know what you mean about having a well known actor in a short term part. I love it but some people end up saying it's "stunt" casting. I don't agree. As for Michelle, she's a good friend of Collinson's. I would hazard a guess that she didn't have to do much in the way of an audition. I can't say i'm that keen on the actress. I find her wooden most of the time. I'm not really familiar with her EE work so it's nothign to do with that for me.

Stephanie Cole is wonderful as Sylvia, i agree!

I watched Michelle Collins as Cindy Beale and she was brilliant, however for this character, I agree, her acting is sometimes wooden.....if she left I wouldn't lose any sleep over it.