Julie and Brian - Mavis and Derek for the 21st Century? 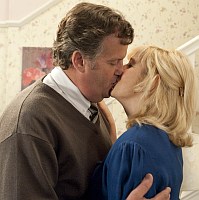 He's a bit of a pompous windbag and she's daft as a brush. He takes his career as a teacher/headmaster seriously, she can drive her coworkers mad with her wittering and off the wall remarks.

I've often thought of these two as the new version of the classic Mavis and Derek. They have a lot of differences, of course, but there are also some similarities. I think the main reason I think of them this way is just an overall feeling. He's more Derek-like than she is Mavis-like but as a couple they are quirky and so odd that they are perfect for each other.

I do think Julie has a bit more to her than Mavis but she too was a wall flower without much luck with men for quite a long time. She's stronger, more forceful and perky than Mavis and she's most definitely a modern woman. She knows what she wants and can make a decision where neither Mavis nor Derek, as his mother said once, could tell the time in a room full of clocks. Julie has a wonderful personal style, too. Mavis was most definitely on the dowdy side but that was more to do with the generation, I think.

Brian is a bit stodgy, boorish, banal and even slightly repulsive. He seems to have his heart in the right place but he's not all that clever dealing with people. He's self centred and a bit of a prat and definitely not the most decisive of  men.  He just seems to me to embody an overall Derekish quality to him.

Together they embrace life with enthusiasm, whether it's UFO-spotting or impending parenthood. There was a rumour they would set up a fruit and veg market in the old Butcher shop and though that doesn't seem to be in the offing yet, with all this talk of healthy eating for the students and Brian's job seemingly on the line if he doesn't pull up the school's collective socks, it could still happen.

Whether you can see the spirit of the Wiltons in them or not, I think they're a classic Corrie couple. Both characters have the comic side to them which we need in the show. Brian was sublimely funny with John Stape-wick and it's too bad Stape's dead because Brian would have latched on to him as BFF rather than Ken and had us all in stitches. Mind you, I suppose he'd have driving John to another murder before long!

I thoroughly enjoy Julie and Brian's interaction with each other as a couple and look forward to more!
Posted by Tvor at 14:13

Julie and Brian are the funniest couple in the street at the mo, hope they stay in it a long time!