To celebrate Rita's engagement to Dennis Tanner, we bring you another character study. 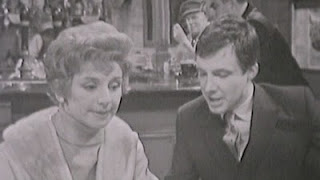 Rita first appeared, very briefly, on Coronation Street in 1964 as a friend of Dennis Tanner. She was an exotic dancer. Would you credit that! She later appeared in 1972 as Rita Bates. You wonder what would keep her character in the minds of the writers all those years, don't you? They re-introduced Rita as the common-law wife of Harry Bates. She was a sort of step-mother to his two children, not the last time she would be a maternal stand-in. Rita's profession was now a cabaret singer and she found no small measure of fame in the Northwest, trilling in clubs on the circuit. 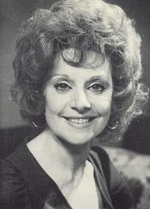 She had bright red hair and cheekbones that could break your heart. She did break a few hearts too but more often than not, was on the receiving end of a list of fellas that "did her wrong". After she finished with Harry, she caught Len Fairclough's eye. It's probably no coincidence that she had flaming red hair, like his long time friend and love, Elsie Tanner. They had a stormy on-again, off-again relationship. They always seemed to be rowing and one or the other of them would go off in a strop. It seemed they were meant to be, though, and they finally got married in 1977. One thing that Rita always wanted to be was a mother. It wasn't to be but she and Len did apply to be foster parents and took care of two children, a boy and later on a teenage girl, Sharon Gaskill who was more than a handful.

Rita's best friend was her shop assistant, Mavis Reilly Wilton. The two were a bit like oil and water, with prim and awkward Mavis always tut tutting to Rita's somewhat raunchier sense of humour and Rita's patience constantly being tested over Mavis' incessant wittering. An unlikely friendship but they cared about each other and supported each other through a lot of life's ups and downs.

Rita's husband, Len, was killed in a car smash on the motorway. Rita was shocked and then horrified to discover that he was returning from a visit to his mistress! That made the grief and sadness even harder to bear and Rita turned bitter for awhile. She picked up and went on but was more wary of blokes after that. Her next major relationship was with Alan Bradley, the father of another young girl she fostered for a time, Jenny. She was attracted to Alan but he had eyes for more than one of the other residents, barmaid Gloria Todd in particular. Still, Rita was attractive to Alan for more than just herself. There was her shop. And her house. And her bank account. Alan insinuated himself into Rita's life but although she did care for him, she still was reluctant to make that final committment. When Alan took her to the registry office for a ready-made wedding, she turned him down.

Not to be thwarted, he stole some papers and presented himself at the bank as Len Fairclough and got a fraudulent second mortage on the house. When he was discovered, his anger boiled over and he beat Rita badly. He was eventually caught and put in prison but at his trial, he was convicted but sentenced to a short term and let free because of "time already served". Rita was terrified! She was convinced he was going to get revenge on her and was stalking and terrorizing her. He was but nobody believed her.

She had a breakdown and disappeared and everyone thought Alan had killed her. He was innocent of that but Bet and Alec discovered that Rita was in Blackpool singing under her old name of Littlewood and didn't remember who they were or any of the recent past. Alec thought Alan should be told and when Alan found out, he raced to Blackpool to force Rita into returning to Weatherfield to prove that he was innocent. She ran from him and in chasing her, he was knocked over by a tram and killed, probably one of the most famous deaths on the Street until Richard Hillman drove his family into the canal!

Rita recovered and soldiered on. She sold the old Kabin and moved to new premises on Coronation Street and moved into the flat over top, leaving the bad memories in No.7 behind. She sold her house to Curly Watts. Jenny blamed her for Alan's death and turned against her and left Weatherfield. A few years later, she met a lovely sweet salesman who was about to retire. They fell in love but again, the bad luck cloud was hovering over the Kabin. Ted Sullivan revealed that he had a fatal brain tumour. Instead of moving away to Florida to retire, Rita decided she would marry Ted but would stay in England so she would have her friends' support when he died, which he did a few months later. It wasn't the end of the hard times, though, because his family fought her over the will.

Since then, her bad luck with men has prevailed. She had a (very misguided) fling with her old show business manager, Alec Gilroy and later had a romance with a man who's wife was ill with Alzheimer's Disease. That didn't work out and it looks like Rita will settle into her senior years, flame-haired as ever, with new shop assistant and business parner, Norris Cole, to take wittery Mavis' place by her side. 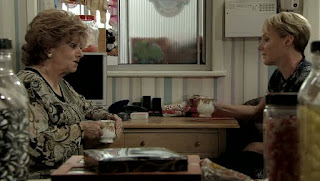 She's had a lot of trouble and heartbreak over the years, but has good friends and looks upon Sally Webster as a substitute daughter with Sally's girls as grandchildren. she found love late in life, with Eileen Grimshaw's father, Colin but he turned out to have a few too many skeletons in his closet and then died of a heart attack from the stress of those skeletons lurching out into the broad light of day. She decided to sell the Kabin to Norris, ending an era, but she hasn't left her spot behind the counter to go cold by any means. She is still seen behind the counter part time, a perennial like Betty behind the Rovers' bar! 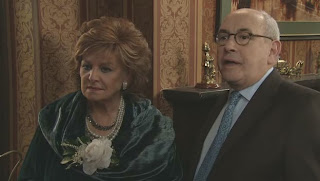 We thought Rita was a goner, trapped in the Kabin amid the bonbons after the tram crash but she emerged with dignity, offering rescue workers toffees and waving the Royal Wave while moaning about her bad luck with trams. Indeed! She was homeless for awhile after the crash and dossing down with Emily and Norris but the Kabin rose again, and Rita will be the Queen no matter that Norris owns it.

Rita has also had a long history of being a mother figure. She never had her own children, much to her regret so she took on foster kids early on. Sharon Gaskell and Jenny Bradley were the two young girls she fostered but unfortunately her relationship with both of them fizzled badly, through no fault of her own. She has been a mother-figure to Sally Webster over the years and a grandmother-figure to Rosie and Sophie. She and Sally have had their ups and downs and have fallen out now and then but they always manage to find their way back to each other for a comforting cuppa.

In the 1990s, she took wild teenager, Leanne Battersby on as a shop assistant when nobody else would trust in her and Leanne became more confident under Rita's gentle hand. In the last year or two, she's taken Tina McIntyre under her wing, giving her a refuge at various times. They, too have had some ups and downs but have maintained their closeness. It's fairly certain she has grown quite fond of a number of the paper lads she's employed through the many years as well. 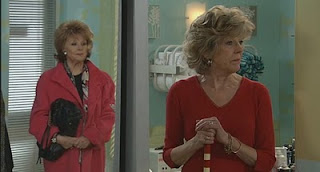 She's been a good friend, too though her temper has sometimes brought her more grief. Emily Bishop is a long time friend as is current co-worker Norris Cole. She has always been good mates with Betty Williams and she and Audrey Roberts had more than a few late nights over a drink or two in the Rovers. Even though she did fall out with Audrey when Audrey was involved in gigolo Lewis, they, too made up. Their friendship was not worth falling out over a man. She still keeps in touch with Mavis, too. 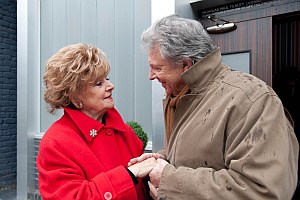 Now in her later years, Rita has found love again with an old friend from the past, Dennis Tanner who returned in 2010. He was homeless and she offered him a place to live. They've been just mates and she's discovered he recently ran out on someone because he panicked at the thought of a committment he wasn't sure he could make. We could see that Rita's feelings were growing but she held back. Little by little, though, it seemed like Dennis' feelings were growing too and sure enough, in March 2012, love blossomed. They are engaged and plan to marry!

It looks like there's going to be a flame haired Mrs. Tanner back on the Street after nearly 30 years. As we heard, Elsie and Rita were once psuedo-rivals for Len Fairclough's attentions though Elsie never wanted to marry Len. Rita knew he'd have had her if she'd have wanted him, because he loved her for years but in the end, Rita won his hand. Now Rita is going to be connected to the departed and deceased Elsie through her son. Let's hope they can have that happy ending!

Rita will always be a favourite. Her sarcastic sense of humour and swift come-back lines are legendary. Her voice will still raise a song once in awhile, if she's had a few gins. She's got a strong constitution and really is a survivor! There's a nice fan page for Rita/Barbara Knox here with a few interesting photos and quotes that you might find interesting, too!

And here is a feature on the Coronation Street blog celebrating 40 years of Rita.
Posted by Tvor at 12:27