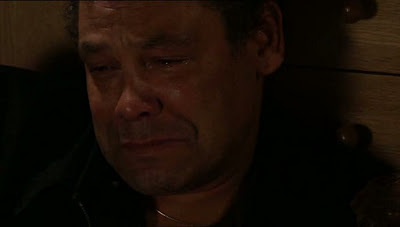 Usually when a man gets his heart broken on a soap, he gets drunk, he gets angry and maybe he shags or at least snogs someone else, someone he shouldn't. He might stare off into space moodily. He might snap at his mates. Maybe, just maybe, he might squeeze a little tear out or punch a hole in a wall.

That's why it's refreshing to watch pool Lloyd in bits and pieces. I don't mean that in a smug way. I just mean it's unusual to see a man barely holding his feelings back and it's unusual to see him baring his soul to his male friends and even a female friend without there being any other agenda or mis-placed snogs. You just don't see that side of a male character on a soap. 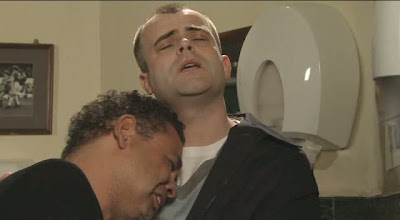 When it first happened, when he found out about Cheryl and Chris, we saw Lloyd and Steve in the bog of the pub, Lloyd crying in Steve's arms. Have you ever seen that before, one bloke holding another comforting him, in a bog no less? Girlfriends, yes. Absolutely. Then one will help fix the other's runny mascara and shore her up to go face the world again with her brave face on. But two men? Straight men? Never! Most of them are written to be far too macho for that. It's booze and broken knuckles and shattered glass usually.

I also loved the scenes with Lloyd and Becky, who wanted company to drown her sorrows the day she got her final divorce papers. The two of them listened to sad soul music ("What Becomes of the Broken Hearted" comes to mind) and downing shots of tequila while comparing notes.

I feel so bad for Lloyd! I want to cry every time I see that adorable puppy dog face with tears brimming over. If Lloyd were a woman he'd have had mascara streaks down his cheeks for weeks! It makes it seem so much more real, seeing a man in that much distress over a bimbo that broke his heart. He really loved her, body and northern soul. 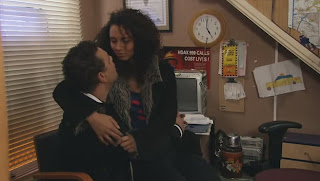 I never really believed that Cheryl loved Lloyd genuinely. I believe she liked him but he also rescued her from a bad relationship and I always thought it was more of a rebound than true love on her part. Lloyd was the knight driving a shining taxi. He stood up for her, he loved her kid, he was kind to her and gentle with her. He loved her and she deluded herself into thinking she loved him back.

Nobody suggested that Chris' tumour was to blame for his violence and indeed I don't believe it was. I think that's been going on long before there could have been any inkling of a tumour though medically, I could be wrong. Still, it wasn't brought up as a reason but as he dealt with it, he seemed to be the "old" Chris she fell in love with. In reality, he was milking it, using it for all he was worth to gain her sympathy. Sympathy and the old magic lured her back into his bed but when she found out about the lies, she went crawling back to Lloyd. To me, that's one of the worst things you can do and I'm so glad he didn't take her back.

A man's got to have his pride. He'd never trust her again and he knew it.

Lloyd has always been a really brilliant character and Craig Charles always puts in a hugely impressive performance with dramatic scenes like this. He and Simon Gregson make a superb double act and he pretty much has that sparking chemistry with anyone he's in a scene with. Except Cheryl. I'm sorry to say that I never thought the pair of them had any chemistry but that's also not down to the actress. The writers just created a character that was bland and uninteresting and it all went downhill from there, unfortunately.

As much as the whole Lloyd/Cheryl/Chris triangle was dreadful, it did show off Craig Charles' acting chops and gave Lloyd some great scenes, real Classic Coronation Street, I think.
Posted by Tvor at 20:25

I love Lloyd to bits and I'm sad that he never seems to get a woman who is really worthy of him. I thought he and Liz made a nice couple but in the end she's too flighty, and always looking over her partner's shoulder for the next bloke. Cheryl was never a good character for me, and it was easy to tell that she was just going to be a temporary diversion, both on the show and in Lloyd's life.

So glad you wrote this story up, Tvor, as Craig and the writers did such a stellar job on it. Because the love triangle/cancer storyline was so drawn out and poorly wrapped up (except for Lloyd's reaction), it just highlighted the actor's (Craig Charles) great chops for making lemonade out of it. I bet he even got to choose some of his fave songs for some of those scenes too. I'm not even breaking up with someone and I was in floods just from the music!

Craig Charles was fabulous wasn't he? I would like to see him nominated for best actor for that performance. He's great at comedy, now he has shown he has many more strings to his bow.

I agree about Cheryl too, a nothing character and will be forgotten quickly.

A lot of the blokes seem to be losers in love. But then i suppose most of the women are like that too when you think of it. Yes, maggie, the music made it particularly poignant and again, you don't see guys on soaps playing heartbreak music while brooding about a woman. Lloyd has also done the drunk, smashing glasses and mirrors phase as well but it's not been about that so far. As his grief progresses he may hit the other stages as well. I am so loving how they're writing this one and really loving Craig Charles.

Craig Charles has been absolutely brilliant.....great scenes with Becky and with Steve. Maybe now that he is leaving Corrie temporarily, Eileen can get back at the switch and her funny scenes with Steve.....move over Fat Brenda!