Kirk plays a blinder this week 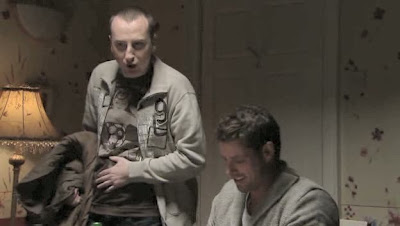 Kirkeh. He's gormless, he's not the sharpest knife in the drawer, and he's true, honest, loyal and the best friend you could have. Kirk has been on Coronation Street screens since October, 2000. He is the older brother of Maria and worked at and ran the dog kennel his parents owned for quite some time.

He's shown time and time again that he can be relied on as a friend and brother and this week surely proves it. As someone that's spent most of his life working with dogs, he knew that Schmeichel was gravely ill and he knew that Chesney wasn't ready to hear it. He took the dog to the vet and broke the bad news and supported Chesney even though he knew Chesney was trying to save a dog that couldn't be saved. But he quietly waited until Ches came to the right conclusion and was there to help the lad grieve. 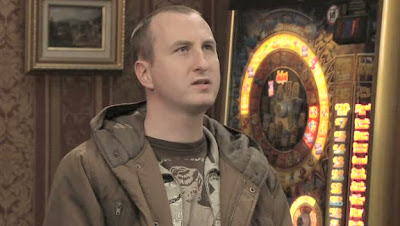 Later, he paid the vet for the cremation and gave Chesney the urn. What a sweet thing to do! Kirk might not always have a clue but he's kind and generous and he can be thoughtful like that.He also tried to lead a prayer moment in the pub in dedication to a great Dane which had Peter, Karl, Dev and Ciaran giggling into their pints along with me and it was a Classic Corrie moment, that!

After the kennels went out of business, Kirk worked with Ashley in the butcher shop, but I don't think he was all that good at it. Probably frustrated Ashley to no end but even so, it was hard for Ash to lay him off when times got hard. I found it very unfair of Ashley not to rehire him. He hired Graeme instead, when Ashley was already trained and he'd promised Kirk the job back if things got better. Probably Graeme was less clumsy with a cleaver, but that's not the point. How could you look at that puppy dog face of Kirk's and not feel bad?

Now he's working at the factory in the packing department. Probably safer than running a machine. This week he also proved that he's not that bad a poker player. He did learn from Les and said he never could beat him, but I reckon Les cheated! Kirk proved he had a great puh-puh-puh-poker face (sorry, couldn't resist the Gaga moment there). He bested the odious Devster and then got out while he was ahead, claiming priorities. He was hungry!

Over the years, Kirk has provided much amusement for this Corrie fan. What of the matching leather jackets he and Jason got? yes, that was a bit boyfriend/girlfriendly but it wouldn't have dawned on Kirk. He's always been the pawn in various schemes, victim of Les, Cilla, and even Tyrone and Jason, his other best mates. Recently he helped Tyrone and Tommy collar a drug dealer to help Fiz out!

Kirk is one of the lads, mates with Jason and Tyrone from away back but makes friends easily. He's the best brother you could every want. He sure has been there for Maria when it counts.

Kirk also took the blame when Gary got into a fight outside the pub, reckoning that Gary already had a record but Kirk, being clean, would get off with a caution. He hardly knew Gary but stuck his neck out because that's the kind of guy Kirk is.

I laugh at gormless Kirk but I also love him. He's such a steady guy, open and kind, honest to a fault sometimes, and he doesn't know how funny he really is. Kirk is played by the talented Andy Whyment. I've met Andy and of course he's nothing like Kirk but when you see him smile, you can't help seeing goofy Kirk. However there's a lot more behind Andy's sharp eyes than Kirk and he doesn't bumble or stumble and man, can he ever sing! That's when you realize just how much talent he really has.

What's your favourite Kirk moment?
Posted by Tvor at 12:54

Oh I agree with so much of this In some Kirk is exactly what makes Kirk great. I know some say he's useless but he really is a great example of the whole community spirit and the heart Corrie has.

I agree, great point about the example of the community spirit. He really is!

Kirk has been fantastic this week! I have always liked him he is underused and should have more story lines. I'd like to see him meet a nice girl settle down and have some kids!