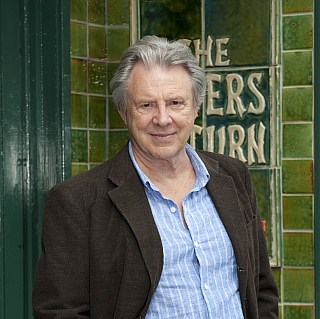 ITV, Thanks for bringing back Philip Lowrie as Dennis Tanner. Now for heavens' sake, DO SOMETHING WITH HIM or you're going to lose him!

While I only "know" Dennis via videos of old episodes, I'm absolutely tickled to bits that they've brought back this classic character. I think it's amazing that we've now got two on screen characters from Episode 1.

Dennis Tanner was always a "Jack the lad", a cheeky charmer and he's lost none of that. Though we don't see too much of him, what we do see is absolutely magic. Philip Lowrie is such a natural, and he's slipped right back into character as if he's never left it. That's a gift and the RADA trained actor certainly has it in spades. The episode where Dennis and Rita discussed his mother, Elsie Tanner, and her final days was magic. It was only a little scene but Lowrie put so much into it that I really believed Dennis was going to cry at one point. Grief over a lost parent doesn't leave you, even over time and that was more than evident.

We're supposed to see some sort of triangle between he, Rita and Emily according to spoilers and I hope they follow through on that. I always thought that Emily had a bit of a crush on Dennis back in the day though he was a good 10 years younger. He's younger than Rita as well but by the time you are all pensioners, it doesn't really matter.

Dennis was homeless and Rita's giving him a place to get back on his feet. I'm sure he must get a pension but knowing Dennis' propensity for schemes, he probably got way over his head in debt, leading to his bout of living on the street. I'm a bit baffled as to where Rita found all the clothes he's been wearing but perhaps he's had them stored somewhere or been carrying them all about with him in bin bags. He was only homeless for about 6 months apparently so likely was able to stash his belongings somewhere or other.

I'd like to see him rent one of the older flats that are still empty such as Janice's or the soon to be empty Tina's over the shop. I'd like to see a bit more interaction between he and Ken. They were polar opposites in the day and didn't have a lot in common but surely they could find common ground now. They would have a shared childhood, after all, though Dennis would have been the younger of the two. (Linda, his sister, was Ken's age, and Elsie's oldest)

I'd not like to see the character wasted. Do something with him. Give him a storyline other than winding up Norris. You can't keep a man like Dennis down for long, give him a new scheme to get involved in. Having him be a relative of Eileen and Julie is great so I hope they do establish that. It gives him more of a connection and more characters to play off. Dennis hasn't mentioned that he ever had any children so this would give him a proper family even if they are not closely related. He could make friends with Jason. The lad could use a father figure, someone to confide in. Let's have some of the other neighbours reminisce about Elsie with him. Gail lived with Elsie, after all and Deirdre knew her as well.

I have just come across your page on Dennis Tanner. I so agree with what you say. The actor Philip Lowrie has brought a bit of class acting back to the Street, and he has such a twinkle to his eyes.

I think he should marry Rita, they would make a great team.

Word. I really love this guy and he's filled a bit of a void left by Jack. I would love for him to marry Rita and spend the rest of his days on the street god knows Rita deserves it after all shes been through. It would be nice to see him and Ken becomes friends after all these years. That little scene where Ken buys him cigs in the pilots certainly suggest they were friends once and probably fell out as Ken went one way and Dennis went another so its seems right that now there back in the same place they might be close again. Ken could use a real mate someone to bounce off of besides Deirdre he's got a lot of people in his but not really many he seems terribly close too and with all the drama his kids make he could probably use it. I would also love to see him talk to Peter and tell him about his mother since Dennis obviously knew her well and I'm sure Peter would love to hear about her from someone with a unique perspective. I am worried though TPTB are using him so sparingly I wonder if they are worried using the oldies too much would alienate young viewers so are keeping him to a minimum.

Also not to be nitpicky but Dennis is older than Ken by about two years. In the sixth(or possibly the fifth or seventh its a little late to go digging through youtube) episode Elsie says the Dennis is twenty two and Ken was only twenty maybe twenty one at the time. Although that may have been retconned later their certainly close enough in age to have playmates and probably friends as well.