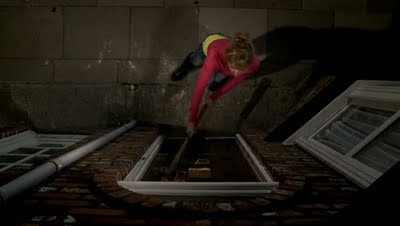 This one's got spoilers....Just so you know.

June started off with a bang, didn't it? Becky smashing up the Barlow house when she thought Tracy was the one that was responsible for Max being taken away and John going boom off the roof of the hospital. I really didn't want to see him being carted off in a straight jacket and having him survive means they're going to pull out an old standard soap plot. Fiz is going to trial for being an accessory for the three deaths so having John alive means he'll come back to save her from going to jail and turn himself in. I guessed that and apparently it's going to happen.  Damn, I'm good! 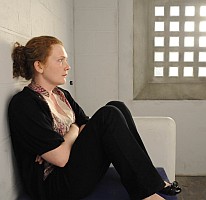 Poor Fiz got arrested for the fraud she did admit to committing. But oh wow, look who showed up! Brian, Stapewick's former coworker, the married one that Julie fancied and I forgot how much fun  he is! What a great Corrie character! He came and went but I hope he comes back. He and Julie are a laugh together. He's almost like a male version of her!

Becky walked out on Steve and I can understand why. Whatever his reasons were, it was quite a betrayal, anonymously tipping off Children's Services. How come buying a child is illegal yet paying someone to be a surrogate parent or paying for a private adoption is not? Yes, i know, they didn't go that route which is deemed legal and Kylie *was* blackmailing them for it. It's a soap, we aren't meant to take it too seriously and it doesn't have to strictly adhere to reality, either. It is what it is. And with Steve finally having enough of her, she spent most of the month lashing out and acting up.  Now it seems as though they're going to share the same living space but apart. Yeah, that's going to work. Poor Stella must be regretting taking the job as manager already!

It's all a Typical Becky Reaction. I know a lot of people are very tired of her and her tantrums but for me, I still like the character and it seems pretty in keeping with the character for her to lose her rag so completely after being so hurt and so let down.

The other thing I do hate about this storyline is how spineless Steve had been with Tracy. It's nothing new, of course he can't stand up to her. He doesn't stand up to anyone but it's annoying that he allowed Tracy to blackmail him and lead him around by the nose because of Amy for all this time. There's a lot of rumours and spoilers around, and I hope they don't come true but i fear they will and it'll be a rerun all over again. For a minute, he managed to stand up to her and what's he going to do? Becky's gone, he gets drunk and sleeps with Tracy one night. Just like what happened when he and Karen had a split. And as much as i dislike Tracy, she apparently loves him or at least is obsessed with him and this is really unfair to her and it's only going to give her more ammunition for revenge.

Kate Ford was only meant to stay six months but they've talked her into a bit longer. Steve needs to get Tracy out of his life and keep Amy. He also needs to start getting connected with a woman that's not going to be so volatile but that seems to be his type. I think he gets it from his mother who likes dangerous men!

Now Steve, finally, has someone new to manage the bar. Probably something he should have done ages ago since Liz had left and I don't think he's really supposed to have a legal licensee who's A. not living there and B. not planning on coming back. Bringing in fresh blood is probably the best thing with his marraige in tatters and you don't want to give Tracy any more room to get her feet under his table.

So what's my first impression? I think Stella is ok. There's been a lot of guff about her accent which doesn't come naturally to her but i don't really find it too jarring. Perhaps that's because i'm not a native of the U.K. and my ear is a bit more forgiving. She's a good actress and she's jumped right in with a local family connection. Yes, she's Leanne's mother and i think that has a lot of potential. In fact i think she's a better actress than we're getting out of her so far, probably because she's concentrating so hard on the accent. Sometimes she seems a bit stiff and I think that might be why. I think she'll settle in once her storyline gets well into gear and it will do in July. She was great standing up to Becky when she jumped into the fray with both feet when Steve was away. She was in a hard spot and knew there wasn't a lot she could do until Steve got back to deal with Becks. I think i might like her boyfriend, Karl, too. He's not bad looking and he's a bit feckless but then again, aren't most Corrie men?

Can't stand the daughter, Eva. I am not sure why she's there. Do we really need another mouthy cow stirring it with the locals and throwing herself (no doubt) at all the available men? We've got Tracy Barlow for that and Kylie if she puts her mind to it. And Becky. Oh, and Tina. Sheesh. I suppose she's there because she's going to be Leanne's half sister and they've already established an enmity between the two women. Down the road, as is again, a standard soap plot, the sisters will probably make it up but not for awhile if the spoilers have any say in the matter. If Eve does indeed go after Nick, that's going to rub Leanne the wrong way and drive another wedge between Leanne and Peter who will probably take refuge in Carla. And so it goes around and around.

Graeme and Xin *finally* left. It's unfortunate that they had to lay this dreck on us for Craig Gazey's leaving story. He's worth so much more than this. It would have been more believable if they had introduced Xin a lot earlier and we'd seen the friendship between the three of them grow and develop. Then it would have been more of an emotional wrench for both Tina and Graeme to realize Xin would have to leave the country and give them a lot more motivation to enter into the fake marraige. But no, they dropped us into it and though the actors did the best they could, the vast majority of fans have really disliked the storyline. I'll miss Craig Gazey and Graeme and wish him the best but I'm glad to see the back of that storyline. Seeing the back of that story seemed to give Corrie a bit of new life, brightening it up.
Posted by Tvor at 17:46