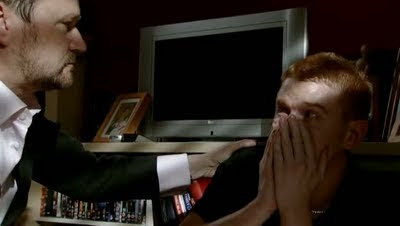 Last year, we saw Gary Windass go off to Afghanistan and return, having lost his best friend, with a bad case of Post Traumatic Stress. He was edgy, he lost his temper easily, and was volatile. He freaked out in small, confined spaces. But eventually he settled down. Or did he?

But did he? He found love with gently Izzy but more and more, he feels the need to protect her, especially as he sees her as more vulnerable in a wheelchair. There are bad things and bad people out there and he wants to keep Izzy safe. But Gary has gone from over protective to manic about it and this week we saw him over-react to her mugging by keeping her helpless in the flat. He figured that if he just kept her inside, nothing bad could happen to her.

Poor Gary, but I'm glad they haven't completely forgotten the Traumatic stuff from his stint in the war. You could see him breaking apart little by little. He'd get all emotional then shut down completely and act like nothing's wrong. Then he'd lose his rag again and it wasn't even a matter of being controlling, it was trying to keep her safe after his whole world had blown apart. Heartbreaking to watch him even go so far as to close the blinds to keep out the light and the rest of the world, watching through the slats for the enemy. then his eyes are glazed over and he's confident she'll marry him and everything will be ok. He was completely gone by that time. Brilliant camera work, shaky, hand held, giving you that unstable feeling, just like Gary's tenuous hold on reality. Then swift cutting back and forth, like an action film, or shattered pieces flinging around the room.

In the end, Izzy's dad, Owen, broke down the door and Gary, too, broke down. For once, Owen actually realized straight away that Gary was in trouble, not a danger. I don't mind admitting I was in tears by the end when Gary begged for help.

We've blogged before about how amazing actor Mikey North is and he just continues to amaze me more and more. He did a lot of research into this type of situation, meeting with soldiers who've been through it, and it shows. Kudos also to the writers and storyliners who didn't let this drop and fade away. If he doesn't get any awards for his performances, there is no justice.
Posted by Tvor at 20:09

Tvor, sounds like a great storyline. Can't wait for it to show up in Canada.. I really like gary and izzy together, hope they can work it out...
Rebecca in TO

I agree, it's been a really great storyline. It's relevant but not over sensationalized, very realistic