John Stape: It wasn't the end 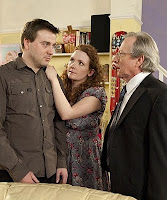 It ain't over til it's over and the saga of John Stape ain't over yet. Why? Because John Stape miraculously survived a fall six storeys from the roof of the hospital and was last seen staggering towards the ferry to Ireland. I wanted him to die, but that wasn't in the cards.

The saga continues back in Weatherfield, because his long suffering wife, Fiz, is suspected of being an accessory in the deaths of three people for which John is responsible. All she's really guilty of is fraud, no matter what her excuses were for claiming Joy Fishwick's money. That probably wouldn't send her to prison on it's own but murder? Off with her head! 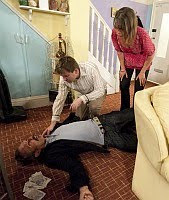 Well, no, not really. But she is going to have a difficult time proving her innocence because there are no witnesses. We know that John accidentally killed Joy Fishwick, trying to keep her from calling out to a neighbour at the door. The police will be thinking that Fiz encouraged John to kill her so they could get their hands on the money.


We know that Colin Fishwick died of a heart attack at John's feet. He hid the body but didn't kill the man. You could make a case for it though. If John hadn't stolen Colin's identity, Colin wouldn't have been there and been upset and furious. The police reckon Fiz helped John hide the body in the first place. I'm not sure a post mortem at this late date would show that Colin had a heart attack but it might.

I'm not quite sure how they reckon she was an accessory to Charlotte's death, though. Admittedly, Charlotte was hammered by Stape before the tram crash but Fiz was attending a hen do at the time in front of many witnesses. After the crash, she went looking for John and then went into labour.

Because John didn't die, I'm going to speculate that he's going to find out about Fiz's trial and come forward and turn himself in. I'm sure John, no matter how far into insanity he's twirled, would not let Fiz go to jail for crimes he committed.

We all rue the day poor Fiz re-involved herself with that man. She gave him chance after chance and nobody could understand why. Love Schmove! He continually lied to her and badgered her into letting him do whatever he decided he wanted to do, illegal or not. I won't go into all that again. I've been pretty up front about that.

But I've enjoyed the ride. I don't know how it will all come out but it's soap standard issue stuff that Fiz won't be convicted for a crime she didn't commit. Somehow she'll get off, whether they capture John, whether he turns himself in or there just won't be enough evidence. It'll be a bumpy right in the meantime until we get final closure on Stapegate.

Edited to add.... DAMN I'm good! Seriously, I did NOT have any advance notice, I'm just a really good guesser!
Posted by Tvor at 19:11