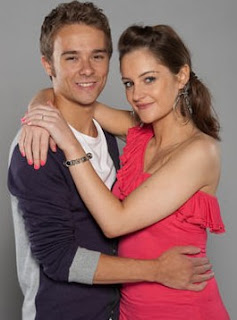 Things have been a bit slow on this blog this month, after the flurry of activity that was February. Then again, the show hasn't been that compelling the last few weeks. Now that Kylie's back, I'm sure there will be a bit of stirring going on.

So far, loving the way she's leading David around by the nose. It's her way or the highway and he'll bend to her will like a wet noodle. Also loving how she's most definitely rubbing Gail the wrong way and Gail's walking around with a permanent knot in her face. Careful, love, your face will freeze like that..... oops! Too late! I do love the character of Gail, though. She's brilliant even when she's being a misery guts which is most of the time. She needs a job and she needs to get laid by someone that isn't going to bring more aggro and grief into her life. That's probably an impossibility, I suppose. Still, she's so pretty and pleasant when she smiles. Pity she doesn't get the chance much.

Kylie. Even though the character is even rougher than Becky if that's possible, the actress, Paula Lane, is really good. There are parallels to Tracy's character in that she's very selfish and self involved. She's manipulative, demanding, a bully and just as able to use her child to have the upper hand over people. She can be nasty, insulting and coarse, just like Tracy but one difference is the life she's led. It's clearly been a life of struggle and survival under her own steam whereas Tracy was brought up with anything she wanted, pretty much, and is a spoiled brat to add to her faults. She's never had to struggle to survive like Kylie and Becky did and never had to live rough.

There's another difference and I think it, again, comes back to the performer being miles better. I can watch Kylie gleefully swath a path of destruction across the cobbles but I cringe every time Tracy opens her mouth.

I don't know how long she and David will last but she'll certainly keep him on her toes while they're together. She'll use him for whatever she can get. Does she love him? I doubt it. But you know, that may come in time, it's hard to say. I don't think Kylie loves easily because nobody's ever loved her and David is going to be in the same boat as Steve who has to deal with his own loose cannon on a regular basis. Steve is nearing the end of his tether, I think, and David will eventually, too, if Kylie doen't kick him to the curb when he outlives his usefulness to her.

Still, she's more than a match for David. David has been a live wire himself, full of anger and resentment after his parents divorced and Richard Hillman tried to drown the whole family. Gail should have had him in councilling right away after that and has suffered the consequences ever since. He's shown a bit more maturity since her sojourn in prison but nobody should count him out as a mature and stable man yet. Kylie is probably the only one that can keep him in line. Tina did a good job of this at first but David was too much for her and too obsessed. David may get tired of being bullied by Kylie but then again, he's lived with a control freak all his life, so maybe that's his comfort zone.

Anyway, I think Kylie is going to keep things interesting for the next little while. There's the wedding to look forward to and probably lots of upset with Becky and Max just because there has to be. Kylie may be young but she's a firecracker and a survivor and she can go toe to toe with anyone.
Posted by Tvor at 10:39

No, Kylie cannot go toe to toe with anyone. I'm already tired of her pouts and sneers.