Graeme and Xin...it's just so wrong! 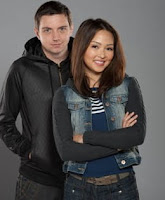 This has to be one of the lamest storylines ever.

Janice's contrived exit was bad enough. Who would believe that Tall Trev would return and, after a drunken snog with Janice, decide he fancies her rotten and asks her to go off traveling with him? Seriously, he's been with Carla and now he thinks Janice is his dream girl? Really????

But putting Xin and Graeme together in an 'illegal immigrant' scam storyline to facilitate the exit of the marvellous Craig Gazey is just wrong.

I am glad they're portraying Graeme as totally uncomfortable with it. He's quirky and eccentric but he's also honest. This storyline seems to have sucked the last of the quirk right out of him. Quirk which was already slowly draining as he sat, all loved up, on the back burner of the Storyline World with Tina. He's has been a hugely popular character, totally off the wall and delightful and it was sad seeing him go more or less mainstream.

Now, the actor has chosen to move on. It's something we face often when watching our very long lasting favourite show. Actors often want new challenges and fair enough but it's hard when you've become attached and invested in a character. At least Corrie doesn't just recast on the fly like American soaps do. Oh, they may recast a character a few years later but it's not so jarring as seeing one face on Monday and a different one on Thursday.

The actor's leaving storyline was ill thought out, though. Xin was supposed to be Tina's great mate when really, she was just a former coworker. I really find it difficult to believe that qualified psychiatric nurses are so thick on the ground that there just is no work for another one. If she's a qualified nurse of any sort, she should be able to get at least part time work, whether in a hospital or with a home nursing service or in a senior's residence even if it's not specifically for psychiatry. Has she tried elsewhere in the U.K.? Thought not.

Seeing Xin and Graeme pretending to be a couple just doesn't work. It's clear to anyone with eyes that they're faking it. They are uncomfortable when they pretend to be affectionate, stammering to get their stories straight,  and there's absolutely no chemistry. This particularly applies to the actress playing Xin. She's wooden and flat, no depth at all. It feels like she's reading her lines from crib notes under the teapot. I don't know if that's due to her lack of ability or if she's supposed to play the character that way. It feels like the former. Gazey's performance is a bit better, his character's discomfort with the plot is a bit more believable in that he, as always, plays it bewildered yet with sharp observations, which is part of Graeme's appeal but even the talented Gazey sometimes seems to be phoning in his performance.

Classic Soap Plot #328 *should* have them pretending a little too well and discovering there really is a mutual attraction. The alternative classic soap plot would, and probably should have them back out of the marraige at the altar. If the first is the way they're going, then perhaps after the wedding, they really will fall for each other for real and Xin will get a job in London and they'll leave Weatherfield behind.

Can't come soon enough for me though I will miss Craig Gazey, just not this stupid storyline!
Posted by Tvor at 08:24

I couldn't agree more.I think Craig Gazey is brilliant and will miss Graeme in Corrie but this storyline is just rubbish! He deserves a better exit storyline than this.

I really despise the storyline.
The girl who plays Xin is absolutely stunning but her character just doesn't work and she just ends up annoying me.

Soapland rule #344: Unless a character is a con artist, their attempts at lying will appear very badly acted indeed. See also Steve McDonald.

The show does seem hell bent on giving all exitees hugely implausible and overly dramatic exit storylines at the moment - and most of 'em this year have been rushed through for no apparent reason, which makes them feel even more forced and contrived. Stick with character-led realism, Show!

How insane is it that the three of them step around the corner to talk/conspire, with Tina looking over her shoulder, thinking no one will spot them...duh? I think Xin's horrible acting will turn out to be exactly that...she probably planned this whole scenario from the beginning.....she is probably not a psychiatric nurse though has plenty of experience with them, having been institutionalized. She wants Tina's life and that includes Graeme. That's my thought...
K

Xin is just dreadful, wooden and her delivery of her lines is as Tvor says, like Crib notes under the Teapot :D Couldn't they have got somebody a bit more likeable or even somebody who could act? And the ridiculous Tina/ Xin shouting on the street... well...
Tina did actually look sorry for Grahame the other night when he said how scared he was.... Shame on you Tina. I hope he rides off into the sunset with Clurr and lives happily ever after with out you!

Not even Ken questioned their sudden "relationship" in the pub the other day considering only a few weeks ago they were asking him for advice on what to do regarding immigration... He didn't even look curious.
Best thing about this is Nosey Norris!!!

The Nosy Norris is the Only good thing about this now!

Agree with most of this the Graeme/Xin storyline has not been well handled. One point though. Many years ago I knew a psychiatric nurse who would have liked to transfer to something else. I asked why not for another form of nursing. She said she'd have to start from scratch. Do the training over again as the training for psychiatric nurses is totally different to that for general nursing.

That's quite interesting, Paula, thank you!

Graeme is a vastly overrated character. Vaguely amusing as David's cellmate, that should have been it. So any story that sees him leave is okay by me.

I agree with Pickledjo. I think that Xin character is absolutely gorgeous. I like her acting but the character is just not well written and too nicey nice so that makes her boring! I feel sorry for the actress and for Graeme. I really hope there is a twist somewhere.

I am flabbergasted by these negative comments about the storyline. I couldn't disagree more: this storyline is really good AND educational. Fine, Graeme wants to leave Coronation Street so the wrote him an exit and make it an educational one. But it feels a bit weird because it is not something you usually come across in your street or pub! So even more kudos to the Coronation Street writers for HAVING DEVELOPED THIS STORY TOGETHER WITH THE IMMIGRATION AUTHORITIES! In addition, Manchester, where Coronation Street gets filmed, seems to be a hotbed for these fake visa marriages.

Gab- what are you talking about! And why do you repeat attack Xin? This very much looks like a jealous personal attack. Xin is playing her very first big role and is doing that really well. You should instead encourage a young starting promising actress ! Have some class and dignity!

I agree with Ximo.why is there so much negative energy on this blog? And why would this storyline be less credible than the one where for instance Kylie sells her son??? And I like Xin too. Yes she is really beautiful and YES her acting is very very very good for somebody who makes her first appearance for such a huge, global public.... Come on people, give her the support and she deserves!

I love Xin and she brings a freshness and positivity to the show. Her acting is very good. I should know as I've been an acting teacher for 22 years. Xin has been a very grateful and is a sweet character. I think it balances out all the crazy negativity on the show which just makes us all unhappy and negative about life. I feel hope when I watch Xin.

Linda: you are soooooo right!

I love the Graeme and Xin storyline. Good people are not perfect and do some bad things sometimes. It's real. Nothing is quite all black and white. Brilliant story!

I destest the Graeme and Xin storyline! I can't even watch them together. Corrie is losing a brilliant character like Graeme and it's really disappointed me.
BOOO, Corrie!