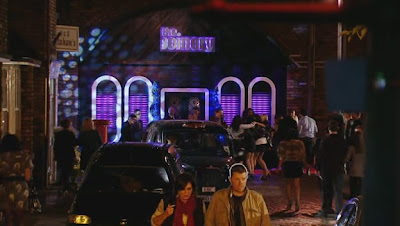 I do a thing at the end of each month where i touch on some of the storylines that made me go Hmmmmm during that month. It's not a monthly summary as such, though, and i don't tend to do a lot of detail.

Sometimes an episode just stands out that it's worth a bit of rambling commentary all on its own and last night's two episodes are the topic of this blog post. Last night the main storylines were the opening of Nick's new bar The Joinery, the Dobbs and the Websters having dinner and later Molly and Auntie Pam chatting, and Peter and Carla's encounter. There was also a little bit of the Stape-gate storyline with a reveal. The more i think about these two episodes, the more i really enjoyed them and they're going to be keepers for me. Why?

The writing was superb. The acting was stellar. The plot lines moved along into new territory. There was drama and pathos, not a whole lot of humour but a few little smiles here and there.

The new bar opened up, rather early in the evening, i thought, for a nightclub type establishment. After a few hours it was only 8:30. You'd think a club like that would only be just opening their doors by that time. I know they do food but i didn't think it was a proper restaurant. I may be wrong. No matter. The bar looked great! Low lights, blue ambient lights with chrome and black. The music was up beat and the staff all looked sleek and sexy. Even most of the punters turned out in their Friday night best! Julie had on a fab vintage outfit and Rosie turned up in glittery silver and fake fur. Cheryl and Leanne wore little black dresses. Nick looked a bit corporate, though, but then i guess that's him isn't it? He's not really that hip no matter how he'd like to think he is. 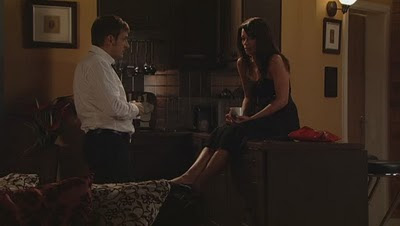 Alcoholics Peter and Carla came, too. Peter did just fine but Carla was chomping at the bit and had been all day. Earlier she tried to get Peter's attention but he was busy and she just boiled over at the bar opening. She had three glasses of champagne and left, her complexion looking distinctly green as she watched Peter and Leanne together. Who couldn't see that coming a mile away? I think it's got more to do with her depending on him to help her with her sobriety, that transference thing. Later on, she finally admitted it to Peter and he was gentle with his rejections. He insisted that they could get past it and stay friends and i know he was worried about her staying sober if he just ran away. He was probably right.

Carla's good when she's vulnerable like this, something you don't see very often, and i'm really glad Peter stayed sober tonight and strong though he did seem to kiss her back for a few seconds. Well, he's only human and she's gorgeous! Let's face it, with the Barlow genes Peter's got, and his history, we already know he's not got the strongest of wills when it comes to women! I really like Peter and Leanne together and i hope they don't split them up...

Which could happen because Leanne drank champagne on an empty stomach and ended up, as she said, bonking Nick on a sofa in the bar. He called it making love but i think she's right, it was a bonk. A quickie filled with lust. She's been eyeing him for a few weeks and looking distinctly green around the gills herself when she sees him flirting with other women like Maria. She does love Peter, but i think after the Natasha incident, that churned up old hurts and anger she's been holding for years. You remember he insisted she abort their baby and it ruined their marraige. You might move on but that kind of thing can come back to bite you emotionally when you least expect it and i think all of this is got a lot more to do with that history than actual lingering feelings of love. 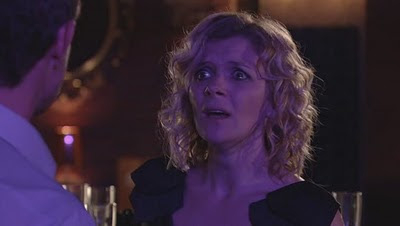 After they finished and Rosie and Jason arrived to get Rosie's mobile, Leanne came down to earth hard and horrified at what she'd done. She did blame Nick for working on her emotions and encouraging her to drink but I liked that she took responsibility for it, herself, too. She knew how he'd been feeling and she knows she should have seen it coming. He's been poking and prodding her and Peter's relationship trying to make Peter seem like second best. I don't like Nick, have i said that lately? It's all about him but you know what? I think that's in his genes, too! Brian Tilsley was quite the Big I Am in his day. So yes, Leanne was horrified at what she'd done and though Nick tried to put down Peter and insist that Leanne really wants him, she ran off with a great line about having more dignity when she was charging for it by the hour! Down the road, she smacked him one and insisted she was going to marry her "charity case" and be happy.

Now why don't i believe this is going to be a one off? Because the spoilers say it isn't! Oh well. I really hoped this wouldn't happen. I really wished it would have been a one night shag and the other thing i really REALLY hope isn't going to happen is yet ANOTHER "Who's the Daddy" storyline. It's a standard soap plot that when you shag the wrong fella you end up pregnant. It's 50/50 whether it turns out to be the wrong guy's child or not but there's angst and upset and the truth always comes out eventually. What I'm hoping is going to happen is that Peter does find out about Nick but marries her anyway because A. he loves her enough to forgive her and B. he's guilty about all the secrecy over Carla even if he doesn't end up getting physical with her. I hope he stays on the moral high ground and doesn't succumb to temptation. Anyway there was great acting and writing in both of these storylines that are weaving themselves into one as they go along.

Then we have the Dobbs/Webster tangle. And it sure is a tangle, isn't it? Molly has a huge amount of guilt over Jack dying just as he found out that Kevin is the baby's father. He didn't judge her which made her feel even guiltier and she probably figures the shock and heartbreak Jack felt over it all hurried on his death. I'm thinking she's probably right. She now says she does love Tyrone, as she told Pam, but if Kevin crooked his little finger, left Sally and said he wanted to be with her, would she go in a shot? I think she always did love Ty even when she didn't think she did back during the affair. I think she regrew her old affection trying to make it all work but it's not a be-all and end-all love of her life, either. She was settling, like Sally did for Kevin the second time around but Sally and Kevin do love each other down deep and Sally regained her feelings for Kevin over time. 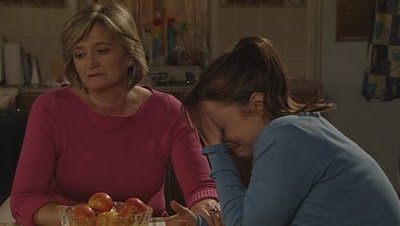 Sally's words to Tyrone about friendship and being there for him were touching and really, just what Tyrone needed. It stabbed Kevin and Molly in the back, emotionally, of course, but it won't hurt them to have a bit of crow to eat. I don't know how long it's going to take but the truth about that affair and the baby must come out eventually and i really wish Sally would chuck Kevin out. What i am speculating is going to happen is that Molly will get killed by the tram crash and I think Kevin will keep the secret. If there's a shock and awe surprise then maybe Tyrone is going to die too though i hope not. If they both die, then as godparents, i figure Kevin and Sally will end up with the baby but Sally won't know the truth. If the truth does come out, there's no way Tyrone would be able to continue living on the street and being partners in the garage with Kevin and he'd have to leave. I don't know whether he would take the baby or not. He would if Molly doesn't die and they leave town.

We know Vicky Binns is leaving and there's no word about Alan Halsall. With the tram crash impending, surely one or more of the announced departures of some of the actors will see their character's die tragically. A young mother? Pure sensational ratings, sure to tug at the heartstrings. Tyrone will mourn not only Jack but his beloved wife too. Kevin surely wouldn't tell the secret after that. We'll know in a few weeks.

The last little string that got picked up last night was the Stape stalking. There was yet another of those patchwork letters and it was sent to Fiz warning her vaguely of her husband's dastardly deeds. Stape managed to convince her it is just someone playing silly beggars but at the end of the night, a shadowy figure dropped something else through the letterbox and we see through the nets that's Charlotte! I guess that solves the mystery! She's the one that's been sending the letters. She's always been a bit bonkers but i think the guilt over Colin has sent her round the twist. She's still after Stape, too and she seems likely to blackmail him into her bed, or at least try to and spineless Stape is likely to succumb. Poor Fiz!

The next few weeks are going to be unmissable for me!
Posted by Tvor at 17:13