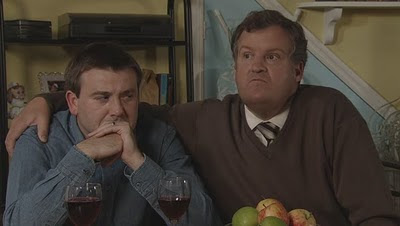 It's all starting up again. John's former workmate Brian comes back and all the lies start again. Colin's mother is asking questions. And so now John is basically in witness protection, that's why he's called John not Colin and is on the run from Mr. Big to keep Fiz safe. And Brian meets Julie, Fiz's best friend. Then he lands on the Stape couch because his wife kicked him out while Fiz and John were frantically trying to split up Julie and Brian. You couldn't make this stuff up! Well, ok, someone did, obviously. Brilliant stuff, though. Classic Corrie Farce. But now, Fiz has to put up with lies yet again because Charlotte is coming back and I'm looking forward to it.

There's a mystery as to who is putting flowers at the factory. It's obvious to you and me that it's to do with Colin's death but is it Charlotte? She was feeling pretty guilty about the whole business of hiding the body. Has she completely gone round the twist? Or is that too obvious? There are rumours she's going to appear to have a stalker but that she's doing it herself to get John's attention. Maybe, but someone commented on this post on t'other blog that maybe Colin came round and got himself out of the hole in the floor before the workers cemented it over and it's him. It's a damn good theory and what a great twist that would be. If not, though, it probably is Charlotte and I reckon that will end under the tram in December.

Natasha's lies came out and Gail put them there. Ok they would have eventually anyway but Gail's interfering certainly didn't help matters. It's a good thing she lost her job over it, she doesn't deserve to have it after poking into a patient's records no matter who the patient is. I really felt sorry for Natasha and you know, the actor really hit it out of the ball park. After most of the time that she was on the show where they did nothing with her aside from occasional ditsy remarks, they finally give her a storyline she can get her teeth into and it's her leaving story! Well she played a blinder, playing a desperate Natasha, persuing Nick when it was clear he didn't really want her to and then lying about the pregnancy when she finally did get him. I thought it was a good storyline even if it showed Nick is just as much of a love rat as he ever was. After all, no sooner was Natasha out of the picture then he was scratching at Leanne's skirts. 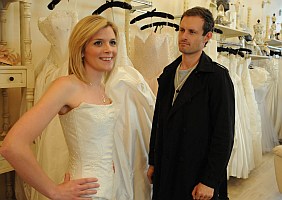 I'm a bit baffled as to why Peter seems to be so friendly with Nick after how jealous he was initially but there Nick was, on Peter's sofa during the whole Natasha disaster, pouring his heart out. There's Peter encouraging Leanne to work for Nick...Wha??? I know he trusts Leanne, but he never trusted Nick and he shouldn't. You can see Nick has rediscovered his feelings for Leanne, he knows he lost the best thing he ever had. And i really dread them putting Nick and Leanne back in business together because i think it's inevitable, don't you? Nick is using Leanne's dreams for the bar to get under her skin. I think Leanne has feelings but they aren't new ones, they are old unfinished business type feelings. Leanne and Peter are a great couple and, with Simon, a lovely little family and they MUST not split them up! I'm hoping it doesn't go all the way and Leanne and Nick end up with no more than maybe a regretted kiss at most.

Kylie led Becky and Steve around by the nose all month, letting them to all the work with caring for Max and taking off on holiday. That left Becky to lie to the Social and pretend to be Kylie so they wouldn't take Max away again. I don't know that they would have, though, considering she's living with her sister and in a more or less stable home. IT's all heading to Kylie's offer that Becky and Steve "buy" Max. Haven't we done this before? Different circumstances but not that far removed. A woman that can't have a baby of her own is desperate to have one so succumbs to the blackmail of a manipulative cow and pays cash for one. Will Kylie leave Max, take the money and run? Likely. Will she come back for more and in the end, take Max away forever? Possibly. Paula Lane as Kylie is very, very good, though and it makes this storyline a lot more watchable than when Tracy Barlow was gurning all over the cobbles. SO not looking forward to Tracy returning! 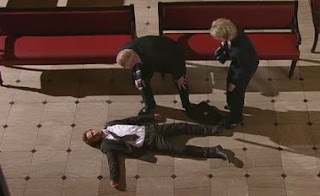 David is in it up to his eyes again. He attacked Tina, Graeme attacked him and then David ran down Graeme. Or did he? He's saying he doesn't remember, he really seems sincere about owning up that he went too far with Tina but really doesn't think he could have ran down Graeme and the doctor says it could be epilepsy. Sounds a bit like the little boy who cried wolf but maybe this time it's true. True, and nobody believes him. It's just too obvious so he must have some sort of condition. That's what it took for Gail to decide maybe he was telling the truth. I wonder how many other of the outspoken neighbours will actually apologize to him. Claire was sure quick to believe David and only weeks after she was falsely accused herself and Dev is becoming more and more obnoxious every day. Doesn't learn a lesson about false accusations, he just turns around and assumes the worst of David 5 minutes after he had to apologize to Claire.

And speaking of Claire, she's bound and determined to move and move to France no less. Ashley would be *so* out of his element and he knows it. But we know Claire, don't we? When she's determined, nothing is going to stop her, not even Ashley's health. She poked and prodded and manipulated until he gasped in pain. Ok, she was willing to back down but he milked it until he had to admit it when Freddie got into his heartburn pills. If she's that determined to go, willing to bust up her marraige and go alone, he'll give in and that will be the back of them. I did like the couple but I do find her awfully bossy and non-compromising at times. I guess that's Ashley's type though, because Maxine wasn't much different, was she?

I'm really glad they seem to have got Gary and Izzy together. I think they make a far better couple than Izzy and Kirk would have, had rumours been believed at the start. Gary as a character has really come a long way. Having him go off to war really is the making of him. I'm sure Eddie is just as worried about Gary as Anna is but he doesn't show it the same way. 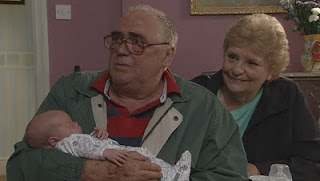 We're going to lose Jack Duckworth and it's going to be very, very hard to watch. Giving anonymous gifts, and he's doing things he always wanted to before he dies a la the Bucket List. Except it was only the one thing, wasn't it? Just the lap dancing club. Was there nothing else he wanted to do?

Michelle said goodbye to Ryan and helloooooo to Ciaran. Anyone else get the feeling it's a rebound thing? Well, not in the classic sense, obviously, but now she's on her own, she gives in to all the feelings she's clearly been having and is lonely because her son is gone. That's two sons that will soon be forgotten, I guess!
Posted by Tvor at 17:29

Email ThisBlogThis!Share to TwitterShare to FacebookShare to Pinterest
Labels: coronation street, state of the street

I started writing a comment Tvor, but, it was turning into a whingeing session so I scrubbed it! basically, in a nut shell, NOT that happy with the way the Street is heading, at the moment. But hanging in there and hoping for the best that it will turn around. The Stape storyline is keeping me going. Just!

I'm about 50/50 i think. I'm tired of tedious Claire and Ashley and i'm not happy about Nick/Leanne/Peter and the Carla drinking thing just seems a bit contrived. Why must everyone that goes through a bout of heavy drinking always be an alcoholic? the Becky and Steve stuff is a bit "been there done that" but i like the actors and i even like the one playing Kylie. She's very good at it and it makes it watchable for me though the bit about buying the baby is dull. Not happy about Tracy returning but i am looking forward to the tram crash drama unlike some i've heard. Celebrate the anniversary with death and destruction? That's one of the things soaps are all about!

I am enjoying David's storyline because it's a twist though Tina can go pound sand. I loved Natasha's storyline and her putting Gail in her place. And the Stape storyline is going to be great!