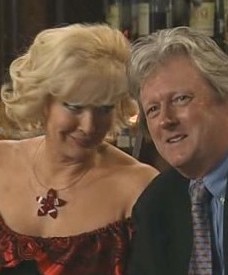 Yay! Big Jim McDonald is back! I'm always glad to see this character return even if it's only for short visits. I know that Liz and Jim have had a lot of ups and downs and are probably better off apart, but I still see the chemistry there and I'm pretty sure Liz does too. I think it's more than just old feelings. I think she still loves Jim and always will, no matter who else she is with. Now that he's back again, for a bit at least, I'm sure there will be lots of longing gazes across the bar though they haven't clapped eyes on each other yet. There's also sure to be conflict between Jim and Liz's newest squeeze, builder Owen. This time, though, I think Jim might have met his match.

Owen reminds me a lot of Jim. He's feisty, tempermental and has a nasty left hook. If there was a fair fight between them, I'm not sure who would come out the winner. Spoilers say that Owen will have the upper hand and beat up Jim or maybe have someone else do it and if so, it's either going to be unfair odds or they'll have taken him by surprise. If Liz finds out Owen is behind the beating, that will probably be him shown the door in a New York Minute. She knows what Jim's temper is like but does she realize that Owen's is just as bad and probably a bit worse? I do think Liz senses the dangerous side of Owen and that's the big attraction. She always preferred men with an edge which is why Vernon didn't last too long. Too safe.

So Jim is back, and he gets to connect with his Elizabeth and his son Steve and granddaughter Amy. Wasn't he sweet with wee "Maxie"? And, with the departure of Beverly Callard in the New Year, will he and Liz go off into the sunset together? I certainly hope so!
Posted by Tvor at 14:42