The Little Boy Who Cried 'Wolf!' 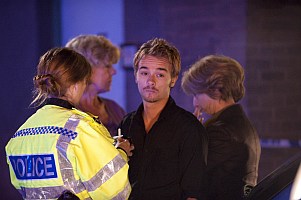 There's a fable about a shepherd boy who, probably in a bid for attention or out of boredom, used to pretend a wolf was threatening his flock and would run to the village crying 'WOLF!' for help when in fact there was no wolf. When he finally did see a wolf and ran for help, nobody believed him. The moral of the story is that you should always tell the truth, and habitual liars are never to be believed at their own peril.

David Platt is one of those liars. He's told a lot of tall tales and lies over the years, mainly to cover up his own misdoings. He always gets discovered and has a reputation now for lying and causing trouble and being violent when he doesn't get his own way.

We know that he still loves, or at least is obsessed with Tina McIntyre and the other week, he misread her friendliness for a renewed romantic interest and became aggressive with her. She was afraid he would rape her but when he realized, he backed off, truly sorry that he scared her. Naturally, Tina's boyfriend and David's best friend, Graeme found out and naturally, he was very angry, confronting David in the pub. Off David goes, taking Audrey's car without permission and later, when he was coming back, it looked very much like David ran over Graeme on purpose.

Oh dear! But David claims not to remember anything! Another lie, no doubt, that's what everyone is thinking. Everyone except his mother but Gail would defend her chick to the death in spite of their past conflicts, some of which were pretty major. If David says he doesn't remember, then that's good enough for Gail even if she knows what he's usually like. This time, there's a suspicion of a possible epileptic seizure that could have made David pass out. In the past couple of episodes, he complained of being tired and a bit spaced out so they're setting it up for that. David will again be the Street pariah and assumed guilty by everyone but this time, it seems he will probably be proven innocent.

David Platt is a character that they've had do a lot of horrible things but you can only go so far with a character if you're planning on keeping them in the show. You can't cross the line because soap law insists that if you do, you must leave (prison, death, etc) They couldn't have David actually rape Tina and they can't have him deliberately run his best friend over, nearly killing him. David will be proven innocent on that basis.

Tina was quick to accuse Gail of killing her father with very little evidence. She's quick to accuse David, albeit on somewhat stronger circumstantial evidence. What really pisses me off, though, is Claire Peacock. She jumped right on the Accuse David bandwagon with a vengeance and it was only a month ago that *she* was the Street Pariah, accused of harming the Alahan child...so much so that she is now intent on leaving the Street. You'd think she would be the one to give David the benefit of the doubt. 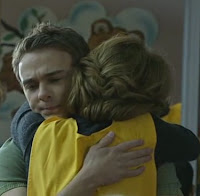 David had been showing a lot of signs of maturity this year, since his mother was in prison. He still has impulses and a lot of anger issues but he's not gone off the rails as much. Will being falsely accused take him off the green and into the rough again or will he manage to rise above it and change his life? He's a good character, one you like to hate but if he's going to be in the show long term, he's going to have to grow up and make something of his life. Steve McDonald was quite a tearaway as a young man though not as much as David but he managed it. I think David can too.
Posted by Tvor at 09:35

I think the storylines have been relentlessly negative for David. Between his self-righteous, controlling and man-obsessed mother and an ex-girlfriend with obvious mental instability (hereditary?) it's hardly any wonder that David has been erratic, irrational and somewhat agressive in his behaviour. But I think that the scriptwriters have seen him as an easy focus for everything bad and it's about time that his cries for help were heard. The epilectic episodes should be the start of recognising another aspect to David which can be grabbed as an opportunity to turn an ill wind into good.

Interesting point of view! I think David started to go off the rails when Martin and Gail divorced but she never really got councilling for him when Hillman tried to kill the family and i think all his anger really started there. Add to that finding out his mother considered aborting him and then helped Tina get an abortion behind his back, that really sent him over the edge.

it's true that Gail's over protectiveness and control freakness didn't help and i agree, this should be the start of David pulling his life together.