Fiz ... Stape... Fiz.... Stape.... Man, did it ever hit the fan, didn't it? Colin's dead, John and Charlotte covered it up and poor old Colin got covered up permanently. By the laws of soaps, it has to come out and even if he didn't kill Colin, covering it all up has to be worth a stint in the nick. Please? Please get him out of Fiz's life? Unfortunately, she was just on the verge of leaving him when she discovered she's pregnant. One last chance? I don't know how she could even consider it. He's done nothing but lie to her and about really big stuff, too. He's done what he wanted with complete disregard to her. Some role model he's going to make for a kid! And he was all ready to tell her the whole truth and what happens? She tells him about the baby and he clams up, promising never to lie to her again. Except not telling isn't the same as a lie is it? Idiot!!!!

Dev is being officious and sanctimonious as always. He agreed to have Claire nanny the kids but doesn't like it when she looks after other kids, too, in his house. He expects her to do all the housework. He doesn't understand he's a prize wally, does he? At the end of the month he's castigating Claire's reputation after his little Aadi was hurt and it certainly wasn't her fault! It wouldn't even have mattered if she'd been there instead of Sophie and Sian, the little boys were tumbling and Aadi got hurt. Would have happened anyway!

Underworld was rebuilt lickety split in record time. Owen is the new builder on the street and really, Bill is getting a bit past it and should be enjoying his retirement. Rita said Owen reminds her of Len Fairclough and he does a bit. Rough and ready but not a bad sort, really. He's bought the builder's yard too. I really think it's about time Bill retired anyway and it seems to mean that Owen is here to stay for awhile. He's flirting and dating Eileen but his eye is really on Liz and i think he's got a bit of that edgy air about him, like Jim had. This might actually be the way that Liz can finally get over Jim because you know, she never really has, has she? 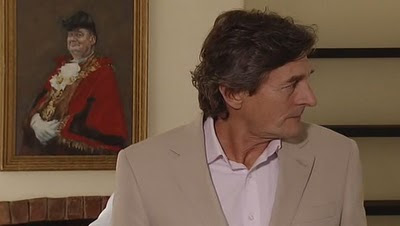 I do feel sorry for Audrey. Yes, she was a foolish woman trusting Slick Sam but she didn't have any reason not to trust him. Well aside from the fact that he was a male escort! Did she really expect him to be faithful to her? I don't know what he did with all the money he should have made, even just escorting should have been good business and add on to that scamming the occasional rich widow? Humiliating as it was, Audrey was right, better find out now than be stuck in a foreign country.

I'm a bit surprised that Lewis didn't take Audrey's 100 grand in the end though she still found out the hard truth the hard way. At least she can pay back the loan against the house but she's going to have a few wounds to lick. I really enjoyed this storyline, and it's always so great to have the senior members of the cast in love stories even if they do sometimes end badly! It's too bad the actor that plays Ted has been unavailable because Ted would have seen right through Lewis and been Audrey's voice of reason!

And there he was using even more foolish Deirdre to scam the betting shop! That was quite funny really. Poor old Diddery! I think she and Ken are just as bad as each other, really. Both longing for excitement but neither quite brave enough to really take the bull by the horns and go get it. The Barlows have a few hart truths to face too. Ken thinks it's a different situation than his with Martha but really, it's not. He was ready to run off and so was Deirdre if the opportunity came up, both with someone that made them feel special and exciting.

Natasha pushed and pushed, she rented the flat and that pushed Nick right over the edge. She's dumped. She's pregnant. Oh no, not anymore, she's not. But Wait! He wants her back! Doh! She thought they're a brilliant fit, only he couldn't see it. I think he's supposed to see it, too, not date you for weeks and months and still not seeing it. He admitted to Leanne he doesn't love Natasha but maybe he thinks he can right the wrong he did Leanne when he made her get an abortion by being a dad this time around. He will end up saying he loves her but he doesn't, really.

And i really like that they've shown Leanne still finding that hurt spot leftover from when she was married to Nick. It doesn't mean she still loves him because i'm sure she doesn't but you just don't always get over that pain. It hides and then rears it's ugly head when you least expect it. I really hope they keep Peter and Leanne together though i do expect it will be a bumpy ride. Leanne knows the truth and Fiz is going to figure it out too and it's going to come out sooner than later. Poor obsessed Natasha is going to get very hurt and I have a feeling the traditional woman scorned is going to lash out and lash out big.

Steve and Becky got turned down for adoption, not because they'd be crap parents but because they haven't been in a stable relationship long enough and it was too soon after her miscarraiges. Becky of course, is going to blame herself no matter what Steve or anyone else says and threatening the panel on the way out probably didn't help matters, but it turned out to be her half sister that castigated her reputation to the Social that did the most damage, someone she hasn't seen in years. There has been no mention whatsoever of a sister until now but then Becky didn't tell the panel about her either. They found her and it turned out badly.

I was skeptical of yet another mardy baby sister, having been burned with the Violet-Lauren disaster but the actress playing Kylie, Paula Lane, is really good so it seems the character might not be quite so annoying as Lauren was. Time will tell and I reckon her little boy, Max, is going to end up under Steve and Becky's care at some point.

And we end with the wedding of the year, nearly scuppered by Mad Mary who threw herself into the wedding planning, in lieu of her own dashed hopes and dreams. She was so pushy and so overwhelming that even Hayley managed to stand up to her and reject her. Hayley did try, though, she invited Mary to the hen night but her heart wasn't in it and Mary could tell. (Wasn't the hen night fab??) Mary took her revenge by uncoupling the train car but the efforts of Fiz and Becky got Hayley to the venue only a little late and the Croppers are Croppers for real now!
Posted by Tvor at 06:48