The Road to Coronation Street 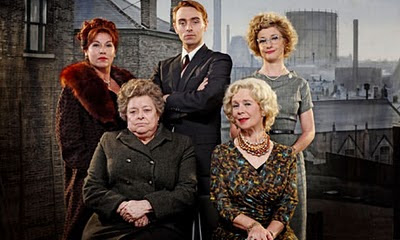 Daran Little was the Coronation Street archivist for many years and he also wrote a half dozen books about the Street and it's history, it's characters and the show's history in general. He was also a Corrie scriptwriter for awhile and turned out some wonderful stuff. He loves the show and knows it probably better than almost anyone barring Tony Warren, i suppose. He's written a very special drama about how Coronation Street came to be on television back in 1960 and it's called The Road to Coronation Street.

It aired on BBC4 last night. Why ITV didn't take it and run with it, I don't know. They missed the boat on that one but BBC sure did a bang up job with the production and casting. Daran's script was amazing and just so right, so perfect! It told the story of how Tony Warren came to write it and the fight he and Harry Elton gave ITV's owners to get it on the air on December 9, 1960. They showed the auditions for some of the major characters, too.

When the casting was announced months ago, the most controversial part went to Jessie Wallace who would play legendary Pat Phoenix, very big stilettos to fill. Everyone was dubious. How could "Kat Slater", the character from Eastenders that she played, be Elsie Tanner? It must be hard to be an actor who gets so well known for a particular character. How do you shake that off? It's not always easy and not always possible. Very possibly why we haven't really seen Johnny Briggs (Mike Baldwin) in much since he left Corrie.

Jessie was very well known for gobby chav, Kat, a cockney Eastender. How could she possibly embody the spirit of Northern actress Elsie Tanner? But...over the last few weeks since the media has been reviewing the dvd before it aired, word has been leaking out. Whispers of "Awesome" and "eerie" and "spot on" have been floating about from reviewers (Mirror's review here and one from the Guardian here). Even writer Ian Wylie thought it was great! Could she really be that good? She herself knew there would be a lot of attention on her in particular, more than all the other characters/actors and she worked hard to get it right.

And she did get it right, I'm relieved to say. I'm always a bit skeptical about reviewers but in this they all agree and they're right. Jessie Wallace really did bring Pat Pheonix back to life. She really did bring the essence of the actress back to the screen and was entirely believable. She didn't overegg the pudding and put on too strong an accent. After all, Pat herself was an actor, she wouldn't have had as strong an accent as Elsie, her character, often did. She played it with a light but firm hand and that's why it worked. She didn't go over the top with flash and attitude, she gave it just enough so that it was definably Pat but not a stereotype of her. And as i read in one of the comments here, after all the insistence by Tony Warren that they only use Northern actors, it is rather ironic that it was a London actor that really brought Pat Phoenix back to life!

The other casting was really good, too. Probably the most inspired was casting William Roache's son, James, to play his own father. William, of course, has been playing Ken Barlow for 50 years. James looks very much like his father, too, and since he knows the man so well, and could talk to him at length about what it was like, he had a pretty good chance of getting it nailed and I think he did very well. He actually blogged about his experience on the BBC tv site and said he was quite nervous he might not get it right but he needn't fear. Celia Imrie as Doris Speed was perfect as was Lynda Baron as Ena Sharples, who was cast at the last minute.

David Dawson plays the central character, the pivotal Tony Warren who was a young writer who used to be a child actor. His acting career seems to be at an end but his writing career could just take off. He's certainly confident, cheeky, and even a bit cocky and has the determination to succeed. He's bored writing run of the mill scripts and persuades producer Harry Elton (Canadian content!) to let him write a script about something he knows about, the North, Manchester, and strong women. Tony Warren was openly gay which wasn't something you saw much 50 years ago and Dawson played it with just the right touch so it was obvious but not "in your face obvious". He was perfect and apparently the real Tony approved! I think he deserves more than one award for this performance.

One of my favourite scenes was during Pat Phoenix's audition when she started with the scene where she accuses her son of stealing money from her purse. Tony took Dennis Tanner's lines and the chemistry between the two blossomed and it was clear that Tony did have the acting chops still in him. The immersed themselves in the lines and it was no wonder she passed the audition with flying colours!

The whole cast was so well performed and the look and feel of it was maybe a bit glossier than the real 1960 might have been but it certainly felt the part. They found some great locations and even used the Victoria Street part of the ITV outdoor set in one night shot of "Tony" and "Elsie" dancing on the cobbles. You could just see the bright blue of the kebab shop on one side. The clothes, hair and makeup were also very good.

A few really nice touches: During the show, as they cast another character, someone would pin the publicity head shot up on a bulletin board. You could see all of the cast photos up there by the time the show actually went out live. At the very end, the camara pulled back from Tony Warren who was watching the show in his office to the bulletin board/wall and the photos were now of the real original actors, not the ones from this production. When you could hear the first episode on televisions, or through the production booth, though you didn't see it, it was actually the original soundtrack and actors from the 1960 broadcast, not the ones from this production. And for the end credits, they showed photos of the real actors with the name and name of actor who played them for this production.

I'm still basking in the afterglow. I'm definitely going to be watching it again and again. Unfortunately, living outside the U.K. i have to resort to downloading since i can't even access the BBC iPlayer easily. I don't know if the show will be shown elsewhere but i hope for all the Corrie fans outside the U.K. that it does. I also hope the BBC has the sense to release it on DVD.

Keeping a list of other reviews when i see them...
New Statesman
End of Show (about David Dawson)
A Post Modernist view of The Road with links to other reviews in this context

Adding this... Road to Coronation Street is available on DVD. In Canada, you can get it online at Amazon  or Chapters Indigo. I'm pretty sure you can get it in retail stores as well, though I haven't actually gone looking.
Posted by Tvor at 08:49

Email ThisBlogThis!Share to TwitterShare to FacebookShare to Pinterest
Labels: road to coronation street

Nice post. I'm getting my students to study "The Road to Coronation Street" to see how they can label it as post modern. There are also links to other reviews on the broadcast here. Apparently up to ten of the actors in this programme have, at one stage, appeared in Corrie!

Oh thanks for the link via yours. I'll edit the post just to add your link in the body of the post so it doesn't get lost. Some interesting stuff there!