Remember the past but forget some of it

A blog post over here asks the readers how they think the new producer of Coronation Street is doing so far. Each new producer brings their own flavour to Coronation Street. Most producers seem to do some really good things and a few plonkers in their term in charge. I have no doubt current boss Phil Collinson will do the same. He's starting off well but really, he's mainly continuing on storylines that were started before he was on board even though his name is now on the screen as producer. The rest of the year will start to see his ideas and creations and that will start telling the tale. One thing he has to do, though, is make sure the rich history is not forgotten. I realize he wants to look forward but you can't just ignore the past, either.

Coronation Street has always been good with references to the past. An old character such as Annie Walker or Hilda Ogden gets a mention now and then. Just the other day, Kevin Webster came out with something that Hilda was famous for but i don't know how many people caught it. He said "The world's your lobster"! I enjoy historical references. That's how people talk, they talk about their pasts and people they knew and things that happened.

I'll be very disappointed if, after the upcoming tram crash, there is no mention of the one in the 1960s. Ken and Emily would certainly remember it. Peter would have only been small but he may remember, too, and any of the other older characters, though not living on Coronation Street should certainly remember reading about a disaster of that proportion in the newspaper (Jack Duckworth, Rita Sullivan, Audrey Roberts, Gail Platt, Deirdre Barlow to name a few long time Weatherfield residents).

One storyline i thought was forgotten was the one where Violet Wilson had Sean's son but they have revived that recently and it was nice to see Sean showing pictures of him with Dylan on a weekend trip to London. Hayley and Roy recently went to Romania to the wedding of former friend and employee Frankie Baldwin (though they missed the wedding). Graeme Proctor pretending to channel the ghost of Fred Elliot was brilliant!

Sometimes, however, there are storylines that are just better off forgotten. Every now and then I hear someone say that it's odd that Michelle's biological son, Alex, is never, ever mentioned. But when that storyline was on, there was nothing but complaints about how badly devised it was, how full of plot holes and people were glad to see the back of it, me included. As much as it's not logical for her never to send a text or mention Alex's birthday in conjunction with Ryan's or for Ryan never to mention he'd seen his biological dad, Nick, it's probably a storyline best forgotten.

Another storyline best forgotten was Hayley's son, Christian. while i thought the storyline, though copied from a Hollywood movie, could have been good and was, in fact, fairly well done at the time, it rewrote history. Hayley told Roy *everything* about her past. It made no sense that she wouldn't have told him that as well at some point. I don't care how they wrote it that the longer she didn't tell him that she'd had sex with her (Harold's) best friend, the harder it would be. It wasn't that big a deal, and even Hayley herself didn't know about the child. But the actress took a year off right at the end of that storyline so it, too, was dropped quickly and permanently. If she hadn't left for awhile, it might have gone on a bit more, with perhaps, an eventual reconciliation even if Christian wasn't to be a regular character. Then Christian would have been a guest at Hayley and Roy's upcoming wedding! Rewriting history annoys me and the end result isn't usually all that successful.

There's going to be another long lost son storyline coming up soon, too. This one involves Ken Barlow and while it does rely on a "Standard Soap Opera Plot", this time around, it kind of makes sense. Consider that Ken Barlow has been putting it around for all of his adult life. There's bound to be an illegitimate child or two, isn't there? Still, did we not see Ken lose his virginity to a librarian? Susan Cunningham, the mother of the new son was his university girlfriend, not a librarian, whose name was Marion Lund according to Corrie.net. Only very, very long time fans may remember that. I only know because i've read it in one of the Daran Little books. So they're rewriting history again. *sigh* But still, it does make sense and seeing William Roach play father and grandfather to his two real life sons might be a bit of a gimmick but i think it is brilliant casting as they do both look like he did in the early 60s. They may not stay as regular characters, most of Ken's children don't after all (Daniel Osborne, anyone? he's as absent as Ferris Bueller!) but chances are good we may get the occasional reference to them. One can only hope. 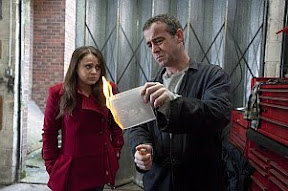 The worst storyline ever, though (in my not-so-humble opinion), is the infamous "Molvin" affair. Kevin Webster seemed to have a mid-life crisis and flirted with and crushed on cute young Molly, the new wife of Kev's business partner, affable puppy, Tyrone. That part i could understand. Crushes happen and Kevin's wife Sally would test the patience of a saint and it wouldn't be out of the ordinary for her husband to have flights of fancy. That's where it should have stayed. Molly, barely out of her wedding dress, seemed flattered and seemed to decide to milk it for all it was worth, for the excitement. But it was so out of character for Kevin to persue a woman almost young enough to be his daughter, especially after his daughter was so recently involved with a man not that much younger than Kevin himself. Kevin even went to jail for assaulting said man yet here he is lusting after 20-something Molly? I didn't buy it. The pair of them all loved up and lying to their respective spouses was stomach turning.

Then the classic soap opera plot emerged, Molly's pregnant and doesn't know who the father is. Yes, it has far reaching consequences and will take that storyline into the future but why??? Could we not rely on an old cliche like that? Next thing you know, someone will dredge up that other hoary old soap plot device, amnesia (well they did, when Rita had a breakdown during the Alan Bradley thing but it wasn't true amnesia, not really.) How is that story going to end? Will that story ever end? It will to some degree because the actress playing Molly is leaving the show. That leaves Tyrone with a baby that may or may not be his. Soap opera rules dictate that the affair has to come out sometime. What happens when it does is anyone's guess but I can't see how Tyrone and Kevin can continue to work together after that. Maybe both Molly and Tyrone will die in the tram crash. We'll know in a few months.

This is one storyline that i don't think is ever going to end or when it does, isn't going to be dropped and forgotten like the baby switch one. Unfortunately.

Out of sight often means out of mind on a soap but at least Corrie does manage the occasional reference and that's good. But a few suggestions...

We understand that actors aren't usually available to revive characters to attend weddings and funerals that the character would probably normally attend but a card or reference would be nice.

Let's keep the rewriting of history to a minimum, please and at least keep the storylines logical for the characters.

Keep the little everyday scenes about nothing in particular. Life's like that, innit? Keep the throwaway lines and that humour that Corrie is famous for. Keep the great drama as well, because Corrie is good at that too.

Use the older, more experienced actors, don't just focus on the young and beautiful ones. Corrie's been getting better at this as well, after a period of leaving them on the back burner.

Keep bringing us those weird, wonderful and off the wall characters like Graeme Proctor, Mary Turner, and Charlotte. A little mania is good for the soul! Keep other off beat characters and eccentrics such as Roy and Julie and Teresa and Kirk around awhile and use them or you'll lose them!

Keep giving us characters we love to hate, characters that make us wonder what they're going to do next.

Give us pathos, and then a good dose of daft 'ap'orths.

There's a reason Coronation Street has lasted for 50 years. Don't mess with the formula too much or it won't last a whole lot longer! And that would be a real shame!
Posted by Tvor at 14:19

The Street began tampering with its past in 1978 - when the Barlow twins became older to fit in with a story-line about Peter wanting to join the Navy. This wasn't corrected until the twin's 21st birthday in 1986. The 1990s brought the "ret con" of Mike Baldwin's son, whose birth date was moved back a couple of years. It's nothing new.