The State of the Street - July 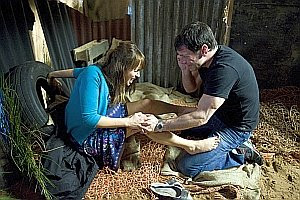 A new baby arrives. Not many people on soaps seem to have normal hospital deliveries, do they? This one was born in a beach hut! I guess it's better than in a cabin in a snowstorm. Tony gets more and more confused and guilty. I still can't decide if he's actually developing feelings for Maria or if it's all in his plan to keep her on board. Maybe it started that way but it's possible that he was so touched by helping to birth the baby that he's developing feelings though it's a classic case of rebound. Yes, he *must* have some kind of feelings because he's getting manipulative and possessive, classic Tony. Problem is, Tony doesn't have a realistic sense of what love really is. Maria, too, is vulnerable and lonely and scared about her future and would naturally gravitate to a man who's handsome, helpful and apparently supportive. I just can't wait for Carla to come back and see all this. And I loved the conflict between Maria and her in-laws. Mammy Connor was definitely being overbearing and pushy but it probably wouldn't have come to a chucking out if Tony hadn't stuck his oar in so menacingly. 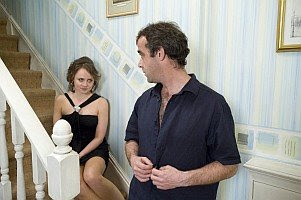 Molly's very good at flirting and teasing isn't she? Well, it's a full blown affair now. Kevin in a mid life crisis is not a pretty sight and judging from most of the feedback I've seen and heard, it's one of the least regarded storylines Corrie has come up with. It's very off putting to me, too. It's not the fact that Kevin is having an affair, it's the fact that it's his best friend's wife and someone barely older than his daughters. Given his attitude when Rosie turned out to be flinging with Stape, it's highly hypocritical, too. Kevin being pursued by maneater Natalie at least made a bit more sense. Molly was supposedly so happy with Tyrone and people seem to think it is out of character for her but i do think that it's probably not the case. I've said it before, she had no problems trying to steal Fiz from Kirk and she chased Tyrone away from Maria or tried to. I think it's a game to her, not a crush or falling in love with someone else. It's going to blow up in her face and then it might actually be worth watching. Funny, though, they have Molly and Kevin do the deed and then whisk her away for two weeks of sun and sand with her husband. One night with Kevin, 2 weeks with Tyrone in a romantic location. A sure-fire set up for a "who's the daddy" storyline you mark my words. Standard Soap Opera Plot. And i reckon Tyrone will not leave Molly when he finds out. He's gormless enough to blame himself and succumb to her begging and pleading when she finds she's pregnant and Kevin doesn't want to know. Mark my words. Another SSOP.

Still loving Graeme. He's driving poor Ashley mad but he's so "Greek Chorus" and off the wall isn't he? Jesse and Eileen flirt so much better and Molly and Kevin and it's a joy to see Eileen happy and having fun. Tina and Jason are fun together, as well, and it's back to his usual psycho self for David, between going off on one on Jason when he found out about Jay and Tee and then turning around and playing games with Joe's Addiction. (Sounds like the name of a band, doesn't it!) Nobody expected his reformation to last. The only real stability David seems to have in his life is his relationship to his newly found Granddad, Ted. That may be his salvation or it may not. Time will tell.

Claire and Ashley are in crisis. Again. Talk about loser! How many bad things can happen to one person? He nearly lost Claire and did lose a baby, well miscarraige but same thing really. And then he bottled out of the vasectomy and didn't tell her. Why do they *ALWAYS* keep secrets on soaps!! It drives me insane, it really does!

Becky's in bother. I do like Becky. She's edgy even now that she's a bit domesticated. I don't think you will ever manage to tame her completely. She's come so far from where she was and Slug is her old life and not good for her and it's being proven out. He's in cahoots with the corrupt cop that has a grudge against Granger though I'm going to hazard a guess that the cop is forcing Slug to set up Becky, I don't think he's a willing participant.

Another brief glimpse into Peter's struggle with alcohol. I was wondering where he'd gone. He fessed up and disappeared. He took the whole "fam damily" to a meeting and it all turned into a viewers' delight, and the dirty laundry was overflowing the hampers! Marvellous stuff!

August will bring Steve and Becky and another attempt at getting married but it's not going to turn out as well as they hope. Liz will be back and Jim will make another (welcome) appearance. Jay and Tee get domesticated and there's a new bird on the street. Literally.
Posted by Tvor at 17:14