Welcome and let's start off with a rant, shall we? 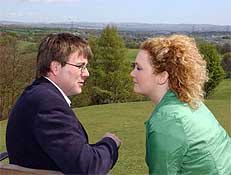 Welcome to yet another Coronation Street blog. This one, as opposed to my other blog, is not restricted to Canadian timelines. That blog will still exist for my Sunday comments on the Canadian shows, plus other news and opinions on what's going on for that timeline. I watch the UK shows shortly after they air and write an episode update for a UK mailing list. I also wrote for Corrieblog.tv for a couple of years so you have to be up on the spoilers for that. I'll post the weekly previews for the coming week but won't be doing episode summaries. Just be aware, on this blog,

THERE WILL BE SPOILERS.

The inaugural post is going to be a rant. About Fiz Brown.
Now i like Fiz, i always have. She's a great character. She's always had her head on straight and has been fun but sensible.

She was wonderful with Kirk but her character felt there was more to life than where she was heading so they split up and she re-met her first love, older teacher John Stape. That's where it all falls down. It was ok at first, exploring a renewed love. It all went pear shaped quickly when Stape proved that he was a tosser of the first order when he had his rubber arm bent by sexy Rosie Webster. Don't forget, Fiz had to have been only about 15 or just 16 when Stape and she were first involved. She came to Coronation Street just after she finished school at 16 and started working in the factory. She's been there ever since with no sign of a relationship before she started to persue Tyrone. Stape was a teacher then so had to be in his mid to late 20s. Obviously has a taste for young stuff and his subsequent affair with Rosie was more of the same.

He says he's weak. I'll agree there. He says he loves Fiz, he may do but he has no sense of committment. She found out in the worst (and most cliche) way (he gave Rosie sexy undies and Fiz some flannel jammies and the two pressies got mixed up!) Fiz chucked him, Kevin decked him but it didn't keep Stape away. He came crawling back to Fiz, full of regrets and over time, managed to almost convince her to have him back. Only Rosie got in the way again. He impulsively kidnapped her and held her locked in the attic at his nan's house for weeks. He got put in prison for that. And so he should!

That brings us up to where we are now. Fiz turned to John for help home schooling a bullied Chesney because she couldn't afford a proper tutor. Now Fiz, when she arrived on the show, said she'd had 10 GCSEs, which means she's a pretty bright chick. Why she is now struggling with Chesney's schoolwork? Obviously retro fitting the plot. I hate that. I really really hate that she's still "in love" with Stape, too. It seems so dead end! He's in prison, he's a self destructive, boring, bland tosser. He's only going to drag her down again and she will never be able to trust him. Ever. He's the worst thing for her. I can't see it going anywhere, i can't see it ending in Happily Ever After, and i can't see them ever being happy together. He is not going to change. Chesney is never going to accept him and Fiz has responsibilities that are far more important at the moment. He's found out about it all and he thinks she's lied to him (she has) and used him (well, sort of, yes) and he's her main responsibility.

What is she thinking?
She's lonely, i guess. But couldn't they think of something better for Fiz? If she had to be involved with the wrong man, couldn't he be more exiting, drive a motorbike, be unpredictable? Anything? Why Stape, Fiz, Why? I suppose when you think of it, she's always had a soft spot for puppy dog eyes. Tyrone and Kirk both were gormless but loveable. Stape looks at her with those big browns and she melts. He's not gormless, though, he's manipulative and he's passive aggressive. Both set off big danger alarms.

Is this the best the writers could come up with for Fiz? She's always been so sparky in the past, red headed temper and passion but with a strong sensible streak as well. She's another woman (like Gail) that had to pretty much raise herself, having a feckless mother like Cilla gadding about. She's been mothering Chesney all her life. It;'s made her strong and level headed. So what happened? Why did she lose her backbone? Why do writers make some women suckers for men, losing their self esteem, taking on the worst losers in order to have a fella. I don't know. I would love for Fiz to kick this jerk to the curb once and for all and take her life back! Do it, Fiz! You'll be glad you did!
Posted by Tvor at 14:42

I always thought she started out in the show as one of Rita's foster children?

She was a foster child of Roy and Hayley but didn't last long. She tried to cause trouble for Roy by saying he hit her. She later confessed to SArah and Sarah helped clear Roy's name. She was under 16 then and left the care of the Croppers. She returned permanently when she left school at 16 and got a job at the factory.