Kate finds a new girlfriend while she and Rana were out on a girls' night at the Bistro. Not really the place I'd have thought would be a pickup joint. Do singles go there for a drink on the off chance of finding someone else that's only there for a drink and a look-see? Apparently so, even though it's main mission statement is as a restaurant. Rana came over all jealous which was a bit strange. Ok, feeling like a third wheel isn't fun but it went on longer than that. Is this the beginning of a new storyline for Rana? Something to actually make her interesting? Is Rana bisexual and actually jealous of Kate because she fancies her? Time will tell. If that's the case, Zeedan is in for a shock. I suppose he already was aware that she's not the traditional Muslim he always thought his future wife would be. She wasn't a virgin and she drinks alcohol and has been a bit of a live wire. 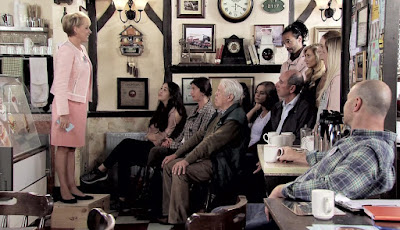 Sally's running for Mayor. I thought in the UK you already had to be on the town council before being elected mayor by your council peers, not by the general public. I have heard, though, that a few cities and towns are changing their policy so perhaps it is correct that Sally can run a public campaign for mayor. If it was the old way, she wouldn't have to do that, just lobby her peers on council. As far as I was aware, Sally quit the council during the trolling storyline and didn't manage to get reinstated. Anyway, we now get another round of hilarity with Sally on the campaign trail. It was a funny storyline last time, but of course there is a twist this time. Why do a repeat otherwise? 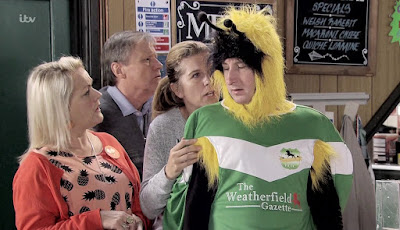 That twist is the grass roots campaign for Kirk as Mayor after he got the job of  a big bee as mascot for Weatherfield County. Kirk is gaining support, mainly for his humour and down to earth point of view, even if it isn't really very politically deft. It would be twice as humiliating if you're Sally Metcalfe, especially if you lose to someone as daft as Kirk Sutherland! It seems a bit too surreal to even contemplate the possibility of Kirk being Mayor of Weatherfield, let alone Beth as Mayoress (and by the way, did she ever get divorced? I don't recall hearing about it and that means they aren't remarried. Surely that would stand against him in a political campaign?) I think Kirk is just going along for the ride, but the main reason for all this seems to be Gina's involvement, backing Kirk instead of her sister. The old sibling rivalry and resentment that Gina seems to have for Sally is the driving force.


Rita's memory loss became more obvious, at least to Gemma who got more and more concerned. Jenny was in Bride mode so fiercely, adding on top of her dislike for Gemma, that she wasn't giving Gemma any part of her attention so Gemma leaned on Rosie Webster who is being an absolute star. I like the two of them as friends. Poor Gemma hasn't had any friends her own age since becoming a refugee from the estate. I think this could work. 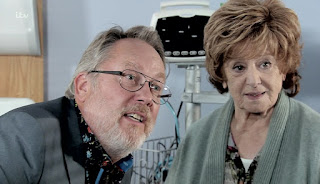 Back to business. Gemma finally impressed on Rita that she should look into the problem and she did but evaded telling the doctor what the problem really was until she eventually collapsed in hte pub. So, with tests, the diagnosis is a small brain tumour. What will happen? Does Barbara Knox want to retire? Perhaps, and it would be a good exit story for her. The injection of the obnoxious Colin, the sponsor of the Mr. and Mrs. competition that Mary and Norris entered (causing them to get married) might be something to consider. He wants to buy the Kabin from Norris and the flat from Rita and at month's end, seems to have a verbal agreement for both. But he's only a temporary character so your guess as to where this is going is as good as mine.

All of this came out on the week that we had the big double wedding of Aidan and Eva, Johnny and Jenny. Both brides looked really gorgeous, with dressed perfectly fitting each one's personality. Aidan confessed his infidelity, then waited to see if Eva would marry him anyway. She did or she tried to. But Maria showed up to try to ruin it all and she succeeded. Aidan knows the truth and though Eva nearly managed to get him to try to work it out, once he found out that the factory had been emptied and figured out Eva had a hand in it, she was dumped well and truly. 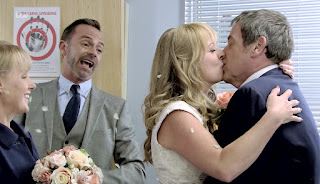 Jenny and Johnny had to race to the wedding venue on the backs of motorcycles driving by Hells' Angels. In the end, though, Jenny couldn't get married without Rita so the wedding was brought to her hospital room. Jenny Bradley is now Jenny Connor. The wind was taken out of her sails, however, when the potential for being a partner in Underworld was undercut by the complete devastation in the aftermath of the factory burgulary, where even part of the roof was removed. That makes no sense at all and even less sense when you know there's a whole neighbourhood of people coming and going. Ok, many of them were at the wedding but a number of them including the Platts and Nazirs were not, and they live right next door! The corner shop was open as well and nobody at all noticed? I don't buy it. 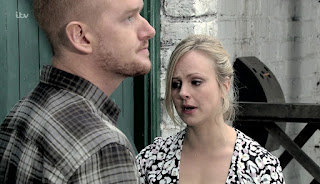 Gary is still working away at that security job and his post traumatic stress is really kicking off after an incident where he had to hold a gun to someone's head. He's defensive, he's aggressive, he's touchy and volatile. His temper is on edge all the time when he's home. He met Nicola in a bar one night and she's licking her wounds after breaking up with her boyfriend and she's a sympathetic ear. But when he finds out she's Phelan's daughter, he doesn't want to know her. Except when he's in another fit of "freak out", they end up sharing wine and talking. Sometimes it's easier to confide in someone you don't know. A vulnerable woman, a car crash of a man and wine. Bad combination and the inevitable happens, quite quickly from what it seemed like. And if we pay attention to soap law, another inevitable is sure to be revealed in a few weeks. At least he's confessed all to Sarah, about the job not being as safe as he pretended. He loves her but it's all going to hit the fan.

Billy and Todd are still finding their feet where Summer is concerned. The actress is quite good and they've had her interacting with Amy and Asha so that's good. I think she and Amy will be quite the duo if they let them. Todd also figured out about Adam's involvement in the factory break in so he's got something to hold over him if need be. Todd isn't above a bit of industrial espionage, though. He doesn't exactly approve but he doesn't really see the problem, either.

Liz has managed to get back behind the bar due to a misunderstanding over a note Peter sent to Steve as an apology. Neither Peter nor Toyah could tell her it wasn't an invitation to be re-hired. This isn't going to end well, is it? And what to do with Moira, the office manager at the medical centre? She's showing a more vulnerable side but she's still a control freak. I'm not sure where they're going with that, whether she's a permanent character or not. 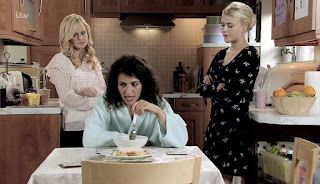 At the end of September, we're just about to Nathan's trial which will start in the next week. Bethany is scared and worried and Nathan's former cohort, Mel, has shown up. Bethany is trying to get Mel to testify with her to bring Nathan down but Mel keeps saying she's not up to it and that she probably would get torn apart on the stand and be no help at all. Of course she won't, she's still under Nathan's influence and is under orders to keep Bethany away from the trial altogether. Still, you could see that when Bethany tried to convince her, assuming she believed about Nathan the same thing Bethany did, that Mel was a bit conflicted. I think she knows down deep that Bethany is right and all the damning things about Nathan and what he does is true but she's so far into it and under his thumb that she can't see a way out even if she wanted to.

Phelan still has Andy in the cellar. He nearly let Andy go but it was a test to see if he could trust him and he failed. It's a no-win situation and Phelan is going to get to the point of having to do something about Andy before someone finds out. Peter and Toyah are going to use a surrogate. Why do I get the feeling this is going to turn out stalkerish? Speaking of which... 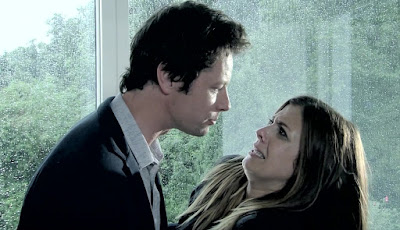 Michelle finally discovered that Will is the stalker and I still have a problem with that. He supposedly carried a torch for her all those years. Then she led him on and then dumped him when Steve came back. After her marriage to Steve went up the spout, she didn't go back to Will, she jumped into Robert's bed and that seems to have turned Will into a psycopath stalker. I found it difficult to believe and it was painful to watch. Even after she figured it out, he was hot and cold, threatening then pleading and then violent, it was just ludicrous. It's got Michelle and Leanne speaking again and while they'll never be friends, I suppose they'll be able to be civil to each other.

October should be interesting, with the trial to start us off and then waiting to see if the truth about the factory will come out.