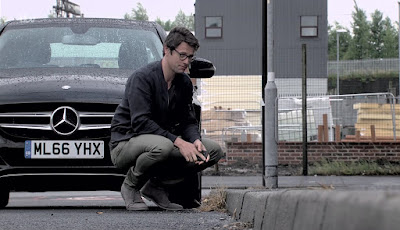 The Bistro has been targeted. Graffiti, a firebomb tossed at the sign outdoors, Robert gets mugged and the flat is broken into. I started to believe it wasn't Robert who was the target at all, it might be Michelle. In this instance, Rich wasn't the culprit but who could be? Was it a coincidence that her ex, Will, showed up just before all this started? I thought not. Then Michelle gets drugged and tossed into the boot of her car, parked in the city centre somewhere. Oh heck. That was also the night Will and Maria were on a date so he must have had a Tardis  and ESP because unless she told him and Maria in the car where she was going, how would he have known?

Now we get to watch it all unfold with Will being smarmy and in Michelle's face, undermining Robert all the time. No luck so far.  If Robert had been with someone else, say, Leanne, I might have cared but I lost any sympathy I might have had for Michelle when she lost her baby. I didn't like her before then and I still don't. This whole storyline is tedious. 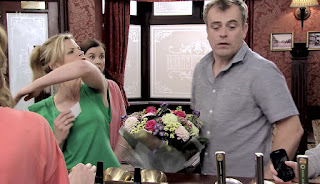 Meanwhile, Steve and Leanne moved in together to help with Oliver's care and because Nick had her chucked out of the flat when he sold it. Liz kept putting ideas in Steve's head that they'd be a good couple so he proposed. Twice, since she was drunk the first time. They might have actually worked out. They've been mates a long time and like each other and it's always helpful when you like your lover. It would be nice for it to grow and develop into a really grand passion and she can get Nick out from under her skin forever. She never loved Nick like he loved her. He was really just her rebound guy.

But alas, Leanne and Steve both realized they really don't have the chemistry or that spark and even Liz realized it when they hadn't got any closer to passion after the engagement. Friends it is, then. At least for now.  You never know, it could change down the road but it doesn't look like it at the moment and really, when you pass number 6 on the wedding scale, it starts to be a bit ludicrous. 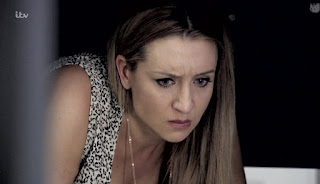 Now that Adam is pushing Eva to help him bring Aidan down as far as the factory goes, Eva is starting to waver back and forth between buckling under the guilt and raging because she thinks the whole Connor family knew all along. She's getting determined and time is not on her side. If she's not showing a baby bump soon, the gig will be up. But Adam seems to be developing feelings for her, as well. He's not trustworthy, honey, steer clear! Which probably means she'll be in his bed 5 minutes after breaking up with Aidan.

And that probaby won't be long in coming. She maneuvered Aidan into getting their wedding pushed up to a double do with Johnny and Jenny who was furious she was going to lose her big day and have to share it. I can't blame her, can you? The wedding is in mid September and it's very likely this is alllllll going to hit the fan and the secret affair should be splattered all over the cobbles. What that's going to do to poor Jenny's wedding, I don't know, unless Eva joins with the fairly recent tradition of waiting for the wedding to be finalized and then pulling the key out of the grenade.  (Becky let Steve and Tracy marry before blowing them up and Nick and Carla married just as Tracy blew the whistle there). There's a few quiet weeks first while Eva gets her second wind in France.

Liz has been scammed by a group or person that put a leaflet up in the medical centre to do with the pretend cigarette "vaping" thing. They emptied her bank account though possibly she'd get that back from the bank if she could prove she was scammed. Even so, it's a horrible thing to have happen and she's going to make sure they don't do it to anyone else.

Chesney survived the accidental stabbing but he's got a serious case of post traumatic stress and he's so freaked out he can't even go outside without having a panic attack. Now he's looking after his two nieces because Fiz didn't realize what was going on. He's been hiding it but not for long. He took Ruby and Hope on the bus and freaked out, walked out and left them alone there, disappearing overnight. When Tyrone heard that Roy's shed at the allottment was broken into he realized that's where Chesney ended up and there he was, huddled in tears. Quite good scenes, I thought though Tyrone really didn't have a clue, trying to tell Chesney to pull himself together and be positive. Chesney needs more help than that. I wonder at the end of this if he'll get some councilling. I wonder if Daniel is still seeing someone?

Gary hasn't been able to get much of a job and his debts are mounting. Because he couldn't afford it, he went on a job without insurance and ended up falling. Now he owes even more money. His ex-army mate offered him a security job in Ukraine but it's dangerous. The lure of the Almighty Pound was too much to resist and even though Sarah found out and tried to get him to stay home, even though she said they were finished, he went. He came back and they made up. Again. But he did get a good bruising while he was away. 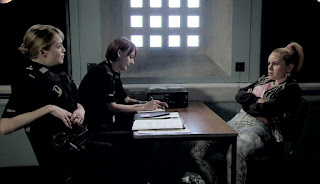 In a somewhat worrying turn, Rita's having some memory loss, and it's not just little things like forgetting where she put her keys, it's big ones like lending someone money,  forgetting to lock the Kabin or forgetting to go to a wedding. She and Gemma fell out over the Kabin door thing because a couple of rough ex-mates of Gemma's came round and they were the ones that robbed the Kabin. But because it wasn't a break in (due to it not being locked), and because Rita's purse had money stolen from it, she blamed Gemma. She even had her arrested. She forgot that she'd lent the money to Gina who'd been sucking up after she heard Rita bailed Sally out of debt years ago. She forgot she'd left the Kabin door unlocked even though she did put on the alarm. The alarm code was on a note on her cupboard and one of the two criminal types took a photo of it.

Gina reminded Rita and Gemma grassed on her ex mates but Gemma's not in a mood to forgive Rita for not trusting her.  It didn't last long but Gemma is now paying more attention and realizes there's something not right with Rita.  We've done Alzheimer's with Mike Baldwin but perhaps they'll do something different with this. (Spoilers, but not yet confirmed or denied by ITV, have it touted as a brain tumour which is a possibility. It's not really a spoiler to say so because it has to be something, we just don't know for sure what it is yet.)

It does make you wonder if perhaps Barbara Knox is looking to retire and you can't hardly blame her if she was. She's certainly at an age that she'd probably rather have her feet up than memorize lines and have early days on the set. I guess it's better to go out on a big storyline but I also kind of hope this might be related to some treatable illness instead and we'll have Rita around for awhile yet.

Peter and Toyah have taken over the pub and it seems to be a very low key affair. They had a grand opening party and that's it. It feels very strange to see them both behind the bar and know they're not just doing a few shifts to help out. They certainly don't fit in with the long standing traditional landlords/landladies. Toyah also had bad news, she won't be able to have a baby of her own but is now considering a surrogate. They did this before when Tina carried Izzy and Gary's baby. I wonder, if this goes ahead, if they'll use someone they know from the Street or if they'll find a new character. Maybe then that person could turn into an obsessed stalker? Like that's never been done before though, to be fair, not on Corrie at least.

Many of the complaints relate to Peter being an alcoholic. I had an idea that perhaps we may see Toyah hit the bottle. She's already upset that she can't carry a child and is considering a surrogate. This is all a lot of pressure. Say they have a surrogate and Toyah worries about her becoming too attached to the baby. The more she worries, the more she drinks and the more she drinks, the more likely the surrogate is to reconsider giving them the baby. Could work. 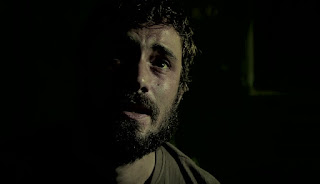 But the big news is that Andy Carver is alive and Pat Phelan has been keeping him in a basement of an old building since Christmas! You may remember he bashed Andy with a laptop when he discovered that Andy had evidence that he was behind the scam about the flats and possibly that he was responsible for burning Kevin's garage. I can't remember without going back to look it up. Turns out he isn't a murderer after all but don't think this lets him off the hook. He did allow Michael Rodwell to die, he did blackmail Anna into having sex with him and he did violently harm Andy and kidnap him. His crimes must be atoned for.

He seems to feel that finding his daughter has made him want to be a better man and he's stuck between the proverbial rock and a hard place. How does he get out of the mess without getting jailed? Nicola will reject him if she finds out. Andy's desperate to escape and you know it's all going to hit the fan, sooner than later, I would imagine. Phelan is taking on board more and more pressure and I think there's no way he's going to turn over a new leaf. I think it's more likely he's going to snap.

Well done to ITV for keeping this spoiler secret. People have been speculating but nothing has been leaked. I do love spoilers but it's still great to have something like this pulled out of a hat now and then!