Pat Phelan is one of the best Corrie villains ever, says I. For me, he ranks right up there with Tony Gordon who is my all time favourite, and edging ahead of Richard Hillman who was second in line. He might even have a slim lead over Tony at the moment. He's slick, sly, sneaky, calculating, and cold. He doesn't lose his temper easily unless really pushed. He bides his time, thinks about what to do, schemes, and turns the tables on people. When he's backed into a corner, challenged, confronted, he keeps his cool for the most part, and always seems to find a way around what looks like inevitable exposure, either by twisting someone's words, blackmail, a plausible explanation (which is, of course, a total lie) or a grand gesture that gets him off the current hook.

Some fans see him as a one dimensional villain, purely over the top Panto and he does have elements of that. He practically twirled his metaphorical moustache over the final confrontation with Michael. I do think he's got layers and I do think he's even beginning to care for Eileen but his ambition and his greed are far too strong for him to really have true love and selfless committment to someone.

He established his villain credentials early on, the first time he was with Coronation Street, by appealing to Owen's greed and financial straits over a building project. Pat wasn't going to use his own money, was he? He managed to take Owen's cash and reduce him to a minimum wage slave after Gary nearly killed him in a rage over him leering over Anna. Then to top things off, he used Anna's maternal need to protect her chick from assault charges and coerced her into bed as his blackmail payment. We are never quite sure if he would follow through with his threats if these characters would just stand up to him but as it's a soap, they never do and succumb to his blackmail and manipulations, leaving us cringing.

He dropped out of sight suddenly, leaving us all kind of hanging, without any closure. But guess what? He came back! Now down on his luck with a fresh divorce and a wife that pretty much took him for everything he had and then some, he slunk back to Weatherfield and got a job as a minimum wage slave for a local builder. Karma? Maybe. But Phelan isn't one to be kept down for long. He latched onto Jason Grimshaw and knew he was on to a good thing.

He continued to blackmail Anna over their one night stand so that she wouldn't continue to bad mouth him but he pushed her too far and she finally confessed to Kevin who understood and, surprisingly, didn't beat the crap out of Phelan. He seduced Eileen away from the lackluster Michael as a way of getting closer to Jason and his business, isolating her by manipulating both Sean and Todd out the door though Todd came back when Jason was beaten up at the hands of Callum Logan's cronies. Phelan took full advantage of Todd's lie that Jason's father, Tony, killed Callum and managed to drive Jason out of town on the pretense of protecting his family. He thought he could get his hands on Jason's business but Jason left Eileen in charge of the money so he had to step up the game.

Luckily, one of his old mates, Vinny, came to him with a scam. Invest in a project. Renovating an old building and constructing posh flats and taking deposits from people. There was an initial investment for an office set up and a barebones construction start up but there was never any intent on completion and Vinny and Phelan would skip town with the cash. Phelan was all for it and worked on Eileen to invest Jason's inheritance from Tony. She hovered around the project like a pesky fly but he seemed to be able to handle her good intentioned interference but he hadn't counted on Michael Rodwell.

Michael was still around and still constantly suspicious of his old love rival. Michael is very much the stereotypical "loser", a man that is not seen as a strong, macho man. He has a heart condition and he quickly backs down from confrontations but Michael is an honest man and we know he's the better of the two. Michael overheard a conversation he wasn't meant to and tripped into the scam. He was like a dog with a bone, determined to bring Phelan down and he almost did it. 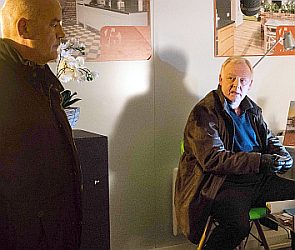 In a final confrontation, Michael had the evidence against Phelan and we watched and waited. Would Phelan actually cross the line and kill Michael? It certainly seemed like he would. Phelan has threatened violence in the past, he's also got a lot of dodgey mates willing to do violence on his behalf for cash in hand. I am never quite sure if he would actually get his hands dirty and do it himself but he seemed to be backed into a corner and there were no witnesses. Luck was again on Phelan's side when Michael had another heart attack and he left Michael to die on the floor of the project offices, much like Richard Hillman left Duggie Fergusson crumpled and broken after a fall over a balcony in another renovation project.

Phelan always seems to have that luck following him. Some use the expression "horseshoe up your backside" to explain the unexplicable tendency for some people to dig themselves out of astonishingly deep holes. My Nan used to say "He could fall into a bucket of poo and come up smelling of roses". Phelan always seems to be able to talk his way out of a thorny situation and make himself look the victim or the good guy. This time is no different. His business partner has had enough of all the aggravation and has scarpered off with all the money, leaving Phelan with nothing but an empty building site for all his trouble. He's been duped just like all the people that have lost their deposit money! But again, he'll be able to claim that he is as much of a victim as the people deprived of their savings. 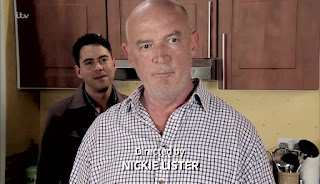 I think Todd better watch his back and make sure he knows a good solicitor. Todd knew what was going on and helped sell the non-existent flats to unsuspecting punters. I think Todd was hoping to find a way to bring Phelan down himself, from the inside, but it won't look that way if the police get involved and Phelan is very, very good at spinning a plausible story out of the fairy tale.

Connor McIntyre plays Pat Phelan and he's absolutely brilliant at it. As always, the character is much enhanced by the skill of the portrayer and Pat Phelan could have been little more than a pantomime villain in someone else's hands. He wouldn't have lasted as long and he would certainly have fallen from grace and favour by now or with the end of this storyline and found himself behind bars. It could still happen, and it probably will at some point over another scheme if not this one. He might not have killed Michael by his own hand but he left him to die and he scammed peoples' life savings. He's done some pretty nasty things to other, as well and if Phelan is going to be a longer term character, they will have to be careful. After all, it's a soap and he'll have to pay for his misdeeds at some point.

I can't wait to see where this will go.