Characters I "Love to Hate" 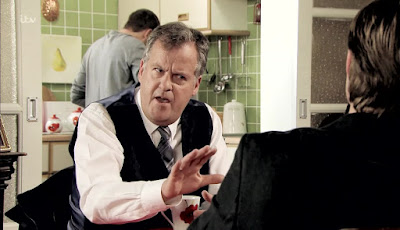 Brian Packham as back on Coronation Street and many fans are rejoicing. For me, it's a mixed bag of joy and dread. You see, I never liked Brian. He's a buffoon. He's selfish, greedy and boorish. He's an intellectual snob, even more so than Ken Barlow.  One scene that stands out in my mind was Brian, staying at Ken's, helped himself to Ken's kimono without asking. It never seemed to occur to him that he should have. Borrowing a shirt or a jumper would have been bad enough, but a dressing gown is a rather intimate garment and it made me cringe with disgust that he would think nothing of rooting through Ken's closet or laundry and doing it. 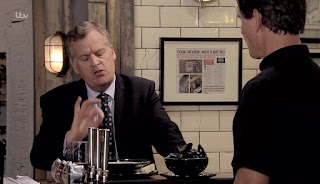 This week, we saw him apparently investigating the Bistro for Environmental Health but in reality, was just after a free meal. Never mind that the complaint would have been logged and his superiors would be looking for a proper report. Never mind that not only was he angling for a free meal, he managed to down THREE bowls of mussels. I'm surprised he didn't insist Robert hand him cash to get out of the investigation. If I was Robert, I'd be reporting him.

Brian is very much cut from a similar cloth to Derek Wilton and I never liked him either.

Both men had a nicer side, a softer side. They both loved and were loved. Derek and Mavis were soul mates even though he exasperated her many times (and probably, vice versa!). Julie and Brian seemed like a good couple and were very much in love but apparently, they did not go the distance. Soul mates they weren't in the end.  Both men were a bit hapless and not very good at what they did in spite of them both thinking quite highly of themselves and their abilities. 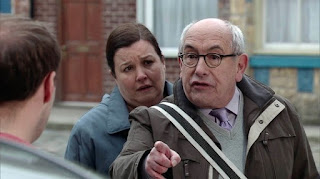 Another current character I never liked is Norris Cole who's a sanctimonious, gossipy and at times thoroughly nasty little man.  He, too, can pull his heart out of the cold storage now and then and be kind to someone when you least expect it but for the most part, I don't know why he has any friends at all.  When he was first on the show in the 90s he was a spiteful and arrogant piece of work. He's softened a little in his old age but he still has his backside firmly on that high horse.

The fourth current character that evokes a strong negative response in me is Pat Phelan. There is very little soft side to him, and I think there's a stone swinging in his chest where his heart should be. He's opportunistic, greedy, ambitious, controlling and he's a bully. He's a classic Corrie villain. 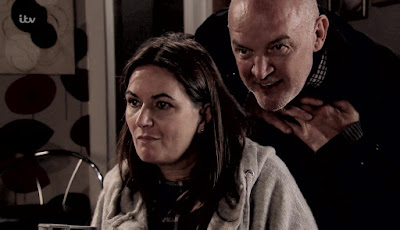 I would describe my feelings for Brian, Derek and Norris as "I really don't like them".  But I very much enjoy Pat Phelan as a character.  I really enjoy watching him. He's so bad, he's good! I don't know what the difference is unless it's the villain aspect. Villains are always more interesting.

The thing is, I like/liked to hate all four characters. This comes down to two things. The writing is usually great and the actors themselves are highly skilled. I think all four men put in top performances and that contributes to the "like to hate" syndrome. I have to admit, Norris is a bit of a struggle at times and I don't find him as funny as most people I know (though he does get in a great line now and then) but Brian and Derek can always make me laugh and Pat Phelan keeps me glued to the screen.  (going with the present tense here, even though Derek Wilton and his portrayer are no longer with us) The actors all have impeccable timing whether it's for comedy or drama.

There have been a lot of characters over the years that I've not liked much. What brings a viewer to like or dislike a character, and note, I said "character" not "actor", is generally subjective. The character is usually written specifically *to* be dislikeable or to have dislikeable characteristics but the viewer doesn't always agree. What one person finds dislikeable about, say, Brian Packham, someone else will find funny or intriguing.

Other "love to hate" characters over the years have included Cilla Battersby Brown,  Nessa, Reg Holdsworth, Nick Tilsley and Tracy Barlow.  I confess I really disliked Kate Ford in her first few years playing Tracy, but she's settled in and come a long way. The perceived skill of the actor makes a huge difference for me in whether I like to dislike a character or whether I really, really find them off-putting. There have been many over the years that I felt couldn't act their way out of a paper bag but I'm going to refrain from naming names.

Characters that you like to hate are usually interesting, intriguing, sometimes funny, sometimes tragic, sometimes both. Maybe they're a bit exaggerated but others might be very understated.  I think that once an actor proves their acting chops and makes a character their own, the writers can really play to their strengths which makes them so much more watchable. Apparently, the writing team had a ball writing for Maggie Jones who played Blanche Hunt due to her amazing delivery of those acerbic lines we all remember.

The writing and acting skill really do combine to make a character great, whether it be a hateful piece of work, a comedy stalwart, or an adored sweetheart of the Street.  When the character is all over the place, when their personalities are unfathomably transplanted, when it seems like the writers and producers don't know what to do with them, they stop being watchable and enter that dreaded realm of the forgettable. (Katie Armstrong, anyone?)

I'm all for Love to Hate characters that give us the comedy gold or the tension that has us on the edge of our seats.  Kudos to the actors behind the facades who bring the characters to life, creating the unforgettable.