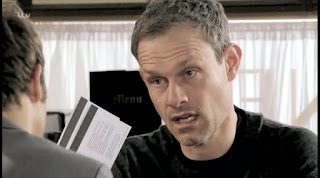 Watching Nick lay a shedload of guilt on Leanne this week and then proceed to flirt with the hen party, keeping a close eye on how Leanne was reacting had my blood boiling. I've often seen Nick use passive aggressive methods over the years to manipulate Leanne and it is really a nasty side of his personality.

Leanne kept pushing him away because she's pregnant with someone else's baby so he made his speech, forlorn face, resigned to her never loving him back as much as he loves and always has loved her. Never mind, I'll get over it. It'll take time but if that's what you want, I'll go along with it. *sigh*  All the while, Leanne's tearing up and feeling more and more guilty because she does love him and wants to be back with him but can't deal with telling him about the baby. 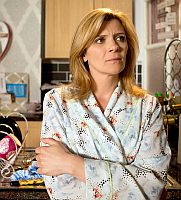 And that's another thing. I do believe that Leanne is the love of Nick's life. He has loved others, and I believe he did love Carla. She was even more hard work than Leanne could be! But for him, it always comes back to Leanne. But while I do believe she was over the moon about him when she was 16, caught up in the excitement of it all, running away to get married, I also don't believe he was the love of her life. He was just her first love and I always felt that when he insisted on her having an abortion when they were first married back in the 90s, he broke something in her. Add on to that, he put her in harm's way when he set her up to be the one that met the man that killed his father. That hurt and betrayal never really left her and he never truly apologized for it, either.

Every time Leanne went back to Nick after they'd both grown up, it felt like she was either running from commitment (the affair when she was about to marry Peter) or rebounding (after her divorce from Peter). I felt like she settled for Nick. She does care for him, he's familiar and safe in her mind, and she probably does love him after a fashion but Nick pushes and manipulates and uses passive aggressive methods to do that. 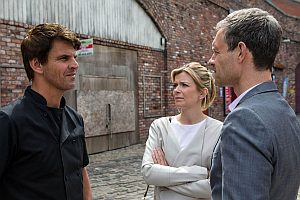 Now it seems she's planning to leave town, likely the best move considering she needs that distance from Steve and Michelle and it's not really a spoiler to guess that Nick will come running to persuade her to stay. Then when he finds out about Steve being the father of the baby, it'll all start up again. Snarky remarks, testosterone pushing him to lock horns with Steve on the mountain top, metaphorically, because it's all about him, always has been.

I'm sure there are Nick and Leanne fans out there, but I'm not one of them. If Robert hadn't turned out to be a bit of an arse, I'd have said they would have made a much better couple and I'd certainly bet Leanne could stand up to Tracy better than Carla did. You don't mess with a Battersby. Alas, I think Nick and Leanne are probably Corrie's Ken and Deirdre for the new era, the couple that will go around and around, on and off many times over the years and end up settling for each other in their old age if both characters stick around.