State of the Street - September 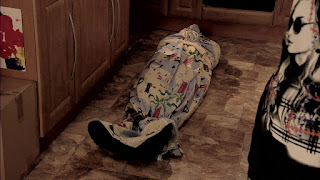 The Corrie Live episode and the calamity of Callum seems to have overshadowed most of the month. It's what most people are going to think about, looking back but while this storyline muscled it's way into the forefront, there were other good storylines brewing and bubbling on the back burner.

And back to the Platt storyline. This has been simmering nearly a year. You may remember Kylie being distraught at Max's ADHD diagnosis and seeking out Callum to find out if Max could have picked up the gene from that pool. Things went from bad to worse when Kylie's self esteem took knock after knock and by Christmas she was back on blow and chucked out of the house. David then proceeded to blame her for the next six months for her absence, the absence he insisted on, which left him to deal with Callum who decided he rather liked the idea of having a child, even if he didn't actually want or know how to be a father. He enjoyed winding up the Platts more than any parental desires but he sued for access and planned to go for custody. The storyline dragged on painfully until...

Kylie came back. The action heated up again and the story lurched forward, Callum putting more and more pressure on, dating newly returned Sarah (who equally enjoyed winding up her brother from behind her blinders) and using young teenage Bethany and her crush on him to add insult to injury. Jason got involved because he still feels a responsibility towards Bethany, it seems, if not Sarah and got broken for his efforts. We all knew Callum would ended up six feet under, we just didn't realize it would be under Gail's floor! Adding Jason and by extension, his father Tony, to the mix is adding suspects to the list of who's going to kill Callum (or, now that we know the answer to that) who's going to be done for it.

Because adding Tony and Jason (and Todd) into it could possibly mean that due to fingerprints on the burned out vehicle and Tony and Jason doing the building work at the Platts, the police may see them as having a very good motive for murder even before they find out about the blackmail.

Sarah's the weakest link here, she's a gibbering mess. Kylie is shaky but so far is managing to keep it together and David seems to have nerves of steel and can even make jokes about it all. The fallout of the Platt storyline will continue over October so we're not out of the woods with them yet. Who's going to be the first one to crack? Everyone thinks it will be Sarah but I wonder if it will be someone totally unexpected.

David can't explain to Max why Callum will never hurt any of them again but he does have a pang of guilt or two because he thinks he can't ever adopt Max now. That's horse hockey, folks. He was going to do it well before Callum was even in the picture. If he could do it then, why can't he do it now? Even if the authorities want Callum's permission now that they know he's had legal doings with Max, if he never shows up after a proscribed amount of time, I'm sure Kylie can go ahead with the legalities.

September was also the month when Sally Webster got her comeuppance well and truly. She always used to be ambitious for Kevin when they were married and he resisted her every step of the way. He finally started expanding his business and Sally compared him to her window washer and a little frisson of that old ambition and the excitement of her old hopes and dreams, and a lot of vodka, pushed her into kissing Kevin.

Now a few years ago, Kevin would have been like a dog with two tails at the thought that Sally wanted him again, and would have been in there lickety split. But not now. He's best mates with the window washer and he knows Sally and Tim have a good thing going and he stopped her cold. She instantly regretted her actions and it was a big secret to be locked in the closet until Sophie found out and Anna overheard Sally and Sophie talking about it. Anna and Sally have always had a difficult relationship, Anna being a vague threat because she's the adopted mother of Tim's daughter. Their sniping has always been a source of amusement but Sally went a little too far and a drunken Anna let the cat out of the bag. Tim is hurt, betrayed and has called off the wedding.

I don't know if they're going to manage to get married. Sally has every hope the wedding will go forward but as October begins, days away from the wedding, we don't know if he'll forgive her or not. I hope he does, regardless of the wedding being on or off. If he doesn't show up, I expect they'll be reconciled by Christmas as long as either one of them doesn't do something stupid. It's a soap. Someone probably will. But barring that, I think it's time for Sally to have a little happiness. I get so sick and tired of relationships being destroyed forever because of a simple kiss. It's ok to feel hurt and upset, but to even refuse to talk or work things out is a bit unrealistic. 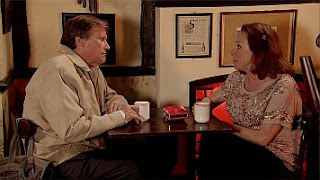 Roy and Cathy have finally and gently made their way to each other as more than friends. Both of them seem to have come to the point in the aftermath of their bereavement where they have realized it's all right to want to be with someone else. They can move on with their lives. They won't forget their late partners but they can be happy again. It's going to be a very slow process because that's the type of people they are but I think they could be good together. Cathy is similar to Roy in that she, too, is unsure and not very confident, a bit awkward and a bit nerdy. If the actress decides to stay with the show, they can go the distance.

Carla's dealing with the revelation that she didn't cause the fire that killed Kal and Maddie and it's a weight off her shoulders. Tracy, who didn't have a reputation to worry about, nor the goodwill of the neighbours to try to retain, is walking around with the glare of the residents burning in her back as per usual. It's funny. They all seem to be glossing over the fact that she started the fire, albeit accidentally, and just ignoring her for the most part but they all snubbed and/or screamed at Carla in the middle of the road. 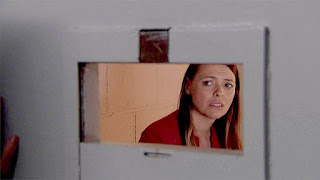 Yasmeen is the only one that's really vocal and angry about Tracy, even more than she was at Carla. Maybe that's because she was too shocked and numb at the time and now she's deep into the anger stage of grief. Carla wasn't charged with the fire and Tracy hasn't been either because there's no proof. Tracy lied to the police and even though she admitted it to Carla, there's no evidence to back it up and she pretended to justify it as saving Carla from suicide with her confession.

It's tough for us watching to see Tracy continually getting away with things like that. Ok, she didn't start the fire on purpose but she did break into Carla's with the intent on hurting her. And this new thing with her ex-husband is boring me to tears. He is dull, dull, dull. She cheated on him when they were married and I bet it was because she was bored. She's only clinging to him now because she's in a tailspin after her mother died and he's a link to the past. I have a hard time getting past him saying how well he knows her and accepts her for who and what she is, too. He has no idea. A lot of years have gone by since she left him and she's done a lot of awful things, very likely more than she's told him. Most of them were in callous cold blood, too.

We've got a new Connor on the scene with more of his family due to arrive in October. I'm reserving judgement for now. Aidan seems ok but we don't know him yet. He seems to have taken the factory in hand quite well. The character hasn't really been fleshed out. I suppose that will start to happen soon. 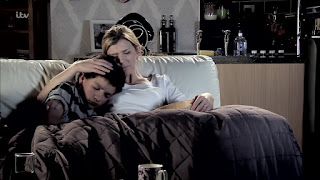 Leanne and Simon's story was a bit difficult to watch, only because it was well done but sad. Who couldn't see it coming after all these years of that child surviving trauma after trauma. He said to Leanne that everyone leaves him and that's true from his perspective. Now she's shipped him off to Peter who's back in Portsmouth after his first foray into the Caribbean, where he was supposed to be for six months. I don't think it was six weeks, was it? Not much more. I expect Simon will come back  all settled and on an even keel for awhile. I still think he'll go totally off the rails when he's about 15 or 16, probably drugs seeing as he's the child of an addict.

Tyrone and Fiz have a long and tough road ahead. It's not going to be easy watching them worry over a sick child. It was difficult enough to watch Hayley die of cancer, something that touches so many lives. Having a story about a sick little girl seems to be a bit too realistic though I have no doubt the powers that be will handle it carefully. I also think Hope will survive in the end. I really think they won't go so far as to have a child dying of cancer on screen. I wonder what kind of effect all that pressure and worry is going to have on Fiz and Tyrone's relationship, though, and I suppose that will also be a large part of the story.

I am continually impressed with Colson Smith as Craig. What a belter he is! They seem to have toned Bethany down a shade so she might work out ok. I'm still not keen on Sarah but then I never was. I'm really going to miss Lloyd, not so much Andrea. She was ok but I never warmed up to her over much.