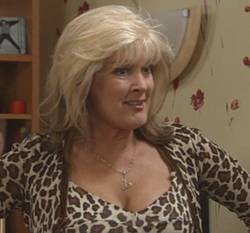 A lot of episodes lately have reminded me again why Liz McDonald is probably the best and most worthy landlady since Bet Lynch Gilroy. Yes, there, I've said it. We've had quite a few since Bet's stint and a couple of landlords as well but nobody has has had the strength, force and vulnerability that Liz has. Nobody else can order someone out of her pub or bar them like she can. Nobody else  can carry on serving when her heart is breaking, a smile snapped on over a scream. Nobody else has that disastrous sense of style while carrying it off with the confidence of a runway model.

Bet was amazing, she really was. A classic character, a brassy blonde with a heart as big as all outdoors, Bet was strong and determined. If she got knocked down, she got back up again and fought tooth and claw to survive. Nobody messed her about for long and Liz has long been cut of that same cloth. She may be blonde now but she used to be a redhead and has the fiery temper to match. No wonder she and the volatile Jim were such a good match!

In some ways, I think she is even better as landlady than Bet was. Bet always seemed to have this undercurrent, a deep rooted belief that she really didn't deserve to own the pub that was her life. I think she believed, down deep, that it would be taken away from her and indeed, in the end, she wasn't able to manage it properly and she lost it,  unable to buy it from the brewery when they decided to sell it off. Liz loves the pub every bit as much as Bet did but in her case, she "owns" it with a lot more self confidence. Nobody's going to take it from her and she'll see to it. Yes, Tony did wear her down but she'd been knocked sideways over Steve's depression which caused a lot of financial trouble. A mere blip.

Here's a quick run down of the Rovers' management since the departure of Bet Lynch.

After Bet left the pub, we had Vera Duckworth ruling the roost. I loved Vera but she really wasn't landlady material and in the end, made a bit of a mess of things.

Natalie Barnes was a homewrecker. She was the instigator in the affair she had with Kevin Webster and deliberately set out to break he and Sally up. In the end, Kevin's heart just wasn't in it, it was back in Number 13 with Sally. Natalie worked in the pub and later did a deal with Alec Gilroy who had taken the pub on from the Duckworths. I never really liked her as landlady. She always had that air of predatory female about her even if she more or less reformed from the homewrecking business and the female punters never really did settle down and trust Natalie with their confidences. 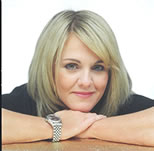 The Rovers went through a period after that when it was owned and run by men, first a triumvirate of Mike Baldwin, Duggie Fergusson and Fred Elliott. Then Duggie ran the pub until he died and Fred ultimately carried the load for a few years until his demise. Shelly Unwin was mostly the bar manager throughout this
period and she was great. She could have been a worthy successor as classic landlady/manager and filled the stilettos of Bet admirably but she fell to the charms of Charlie Stubbs and later, the bigamist Peter Barlow broke her heart. She didn't last long after that.

Eve Sykes was also in the picture as Fred's wife for a short while during this period. She was more interested in getting her heels behind the bar than she was in Fred himself and she turned out to be a bigamist, too. She never had a chance in the annals of Rovers history.

Thus began a rocky period in the pub's history. Steve bought the Rovers and installed Liz as licensee and landlady. Admittedly, Liz did retreat to Spain a couple of times for lengthy visits (due to actor Bev Callard's health) and because of that we struggled through stints of volatile Becky as Steve's wife, arm folding Michelle Connor who is also currently Steve's wife, and a very unfortunate but relatively brief (two years) sufferance with Stella Price at the helm, first as manager and later, mercifully short lived, as owner. 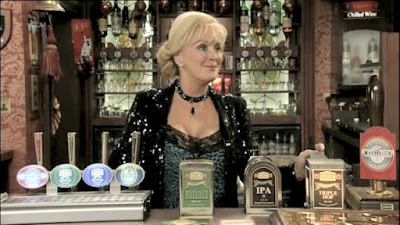 Steve bought the pub back from Stella with Liz's help and she returned from Spain, ready to take the reins again, sharing the responsibility with Steve and Michelle. In the year or so she's been back, she's gone through two men, both of whom have turned out to be wrong'uns. Tony Stewart who got sucked into Tracy's schemes to own the pub and "show everyone" and then Dan the Brewery Man who has a temper and a history of violence towards women, specifically prostitutes.

But Liz? She told both of them to go to hell and get out of "her" pub (one by phone and one in person). I do love it when Liz shouts that, or "Right! Yer Barred!!", chin out, one hand on hip and the other ready to foist 'em out if they don't go willingly.

At the moment, Tony owns Steve's half of the pub and it is still unclear whether Liz's half transferred to Carla or not. Nothing's been said, and if any papers were signed, they probalby went up in smoke in the fire at Carla's flat. I'm sure this will be addressed sooner or later but if things come out the way they must, Liz will once again be rightful owner of half of the pub and Tony will be barred for life! 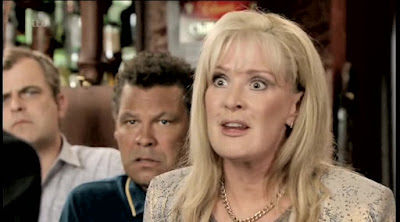