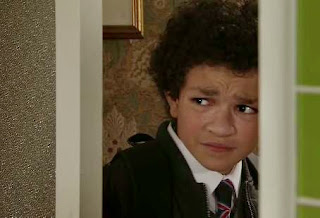 
The lad is going to be 12 next month and has had more tragedy in his short life than most soap characters have in a lifetime. The only one even close to his tragedy level might be Carla Connor or Leanne Battersby but it's far more damaging to a child. The adults can be termed "survivors". I fear Simon is going to be termed "damaged". We've started to see him having anger management issues, no, let's call that Rampant Rage syndrome (RRS), shall we? 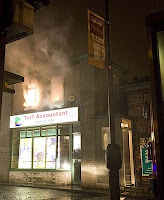 We saw how trauma affected David Platt as he went through his teens and that was after only one divorce and an attempted murder. Let's have a look at the incidents that have happened to Simon, shall we?

At the age of five, his mother dies of cancer and his life is upset by having to live with a father he never knew, a father who was, at the time, a raging alcoholic who nearly burned down the flat with Simon in it one night. A raging alcoholic that interrupted the school nativity. (and it would prove no to be the last time that happened). 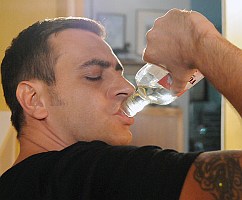 His father, Peter, gets together with Leanne who mothers the little boy but then his drinking drives her away. Lost mother #2. Ah, but Leanne is eventually persuaded to return because Peter has stopped drinking.

The tram crashes and Simon again nearly dies in a fire, trapped in Number 13 but is rescued by Jason. Peter nearly dies in the tram crash. It's touch and go for a few days but he and Leanne marry in hospital. Ah, but Leanne had been having an affair with her ex-husband, Nick and Peter finds out after Nick has been manipulating Peter into drinking again. Peter chucks out Leanne but she ends up being persuaded to stay after all. Simon probably thinks Peter has installed a revolving door at the flat by now. 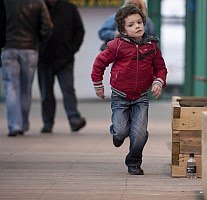 Simon meets his maternal grandparents. You might think that's a good thing. Except after Peter's alcohol problem surfaces again, the grandparents try to take Simon away from Peter. They take the lad to Blackpool but when he overhears that they won't take him home again, he runs off and finds his way back on his own. Grandparents back off, never to be heard from again, and Peter stops drinking again. 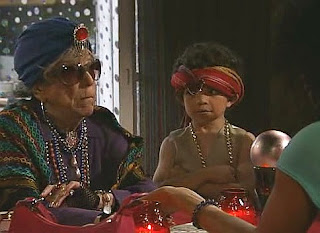 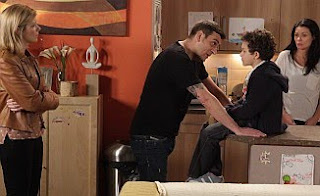 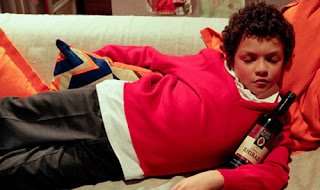 Peter and Leanne are back together. Leanne gets pregnant. Yay! Leanne miscarries. Oh no! Peter starts an affair with Carla which comes out during a trial where Carla is has been charged with murdering her rapist, Frank. Leanne leaves again. Carla moves in. Leanne is determined to have custody of Simon because Peter is unstable and Simon hates Carla. She is also reconciled with her ex, Nick. Simon doesn't handle the conflict very well and gets hold of a bottle of wine that Carla sneaked in the house. Well, booze is always how his father handled anger and upset, right? Wakeup call for Peter who allows Simon to be with Leanne.

Simon grows to love Nick but he nearly dies in a car accident and is suffering brain damage that makes him tempermental. Leanne and Nick break up. Simon has lost another father figure. 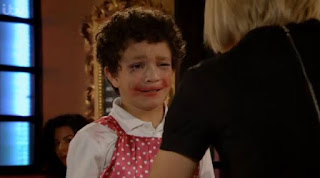 Simon is bullied by Faye and Grace.

His Grandpa Ken left Weatherfield for a year and a half.

He even had a pet rabbit that died. 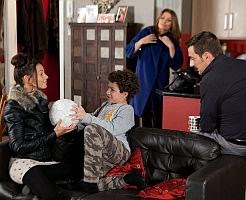 Simon eventually gets over his hatred for Carla though she's never his favourite person. Peter and Carla marry and Peter starts an affair with Tina shortly after. This doesn't bode well. Simon becomes very close to Tina who is helping out Carla (both before the affair and after it) by babysitting and hanging out with Simon who grows to love her. Tina is murdered and his father is arrested and goes on trial for her murder. Peter's affair with Tina and the stress of juggling two women have him back in the bottle again. When Tina is murdered, Peter is jailed and goes on trial. Peter loses Carla in the process and though he's found innocent, eventually, he leaves Weatherfield to start fresh. Simon has now lost his father.

Leanne takes up with Kal and he moves in. Simon grows to love Kal. You guessed it. Kal dies in a fire (this time, at least, Simon is not trapped in the fire!) 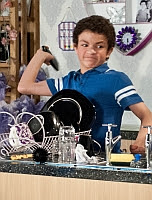 His anger is starting to be difficult for him to handle. He's lashed out once so far, throwing a tv remote control at Leanne's face after Kal's death. According to the spoilers, he's going to be held hostage with Leanne by one of her former clients (from when she was a hooker). He's also about to lose his beloved Grandma Deirdre.

All this in about a 7 year span of his young life. Fans complain that the powers that be don't seem to have Simon acting his age. He's crayoning cards for people, he's clinging on to them for dear life. Can you blame him? He's not had much of a childhood, he's probably experiencing a severe case of arrested development and I wouldn't be surprised if he hasn't already started picking the wings off insects for fun.

What's down the road for Simon? Will someone ever take that lad to get counselling? Will he surpass David Platt as the town tearaway? A child with that much anger already is doomed. I fully expect a storyline dealing with teenage alcoholism or drug abuse in Simon's near future. There is a genetic predisposition for addiction and with the things that kid has had to deal with, he's a prime candidate. Time will tell.
Posted by Tvor at 09:26