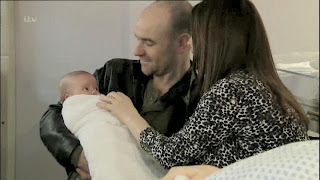 Now, I'm not saying Faye should throw the baby out with the bathwater, not literally. But the suggestion has been brought up that the paternal grandparents take baby Miley and raise her themselves. Jackson's parents seem to be implying that Jackson also doesn't really care a lot and that they'd be doing all the work, much like Anna is in the Windass flat.

From the time she found out she was pregnant to this date, Faye really didn't want anything to do with the baby. She planned to have Craig leave the baby at the hospital doors anonymously so nobody would have to know she ever gave birth but it didn't work out that way (much to Craig's relief). Anna has been doing her best to support Faye and encourage her to bond with the baby but it's clearly been of no use. Anna's tired, stressed and angry and Faye is indifferent which only makes Anna more tired, stressed and angry. Something's got to give. 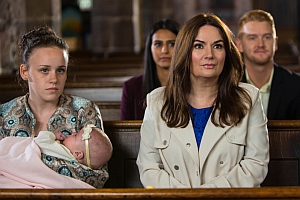 And give it did, at the christening and Tim realized that Faye really can't handle parenthood. He intially resisted the Hodges' suggestion that they take the baby but he sees Anna at the end of her tether and he knows how Faye feels. Tim would hate to give up the baby because he's besotted and isn't it a grand thing to see him so over the moon about little Miley? I love it! He would never let that baby go unless he was guaranteed to be a continuing part of her life.

This week, Anna will talk to the Hodges and Faye will be told what's going on. Anna is Faye's legal guarding but if Faye, as the baby's registered mother, wants to let the baby's father's family bring her up, I'm not sure Anna can stop it from happening. I'm really mystified why we haven't seen hide nor hair of Social Services since that one visit after the birth. They knew then that Faye was uncertain and you'd think they'd be following up. I hate when that sort of thing might be happening but it's in the background and we viewers know nothing about it. There's been no scenes, no references, nothing.

Never mind. I don't know at this date whether Faye will give the baby up or if she'll realize at the last minute that she does want the baby after all. I haven't seen any sign of it at all. There have been no secretive looks, no loving smiles when nobody's looking, and Faye has been resentful and impatient whenever she's had to be in charge of the baby for any reason. I really want this storyline to be different. I really want Faye to say to Anna, I do not want this child and I cannot care for her. Take her away.

I want Miley to be brought up by the Hodges. I do want Faye to see the baby, have visits and such and when she's older and more mature, she will grow to love the baby even if she's not the primary caregiver. That's ok. I don't want this to descend into a sentimental schmaltzy heart rending sobbing at the idea of giving the baby away and see Faye clutching the child out of Mama Hodge's arms with Anna looking triumphantly smug.