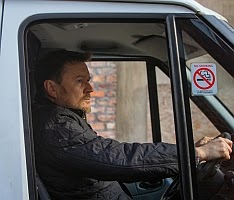 (Oh dear, I forgot I had this sitting in draft form and meant to post it the other week. You won't mind, will you?)

We've just seen another character leaving Coronation Street, this time in his own van rather than a taxi. Owen Armstrong has had a bumpy ride on the few years that he's been with us. The character was brought in and likened to the classic Len Fairclough. Len was a builder and was rough around the edges but had a good heart. Owen? He's a builder, too. And rough around the edges? As rough as a badger's arse. Does he have a good heart? Kind of. He does love his two daughters, Izzy and Katie but in trying to keep them safe and having to raise them on his own (more on that in a minute), he goes a bit over the top.

You see, Owen has a temper, also like Len Fairclough and Owen is a bit of a bully, too. When we first met him, he was presented as an over-protective father to disabled Izzy who was determined to be more independent. Izzy has a syndrome that means she spends most of her life in a wheelchair though she can stand and move around a little bit, though it's painful. Izzy is just as stubborn as Owen and they locked horns a lot, I think. Owen's younger daughter, Katy, almost 16 at the time she was introduced, was also a handful, kicking back at her father's attempts to keep her under his protective thumb. She is also headstrong and stubborn like her father. I can well imagine the rows in that house! 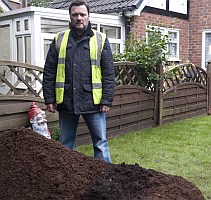 I don't think Owen ever struck his children but they certainly have implied that he lost his temper a lot. Having said that, we have seen Owen lash out and give Faye, Anna's daughter, a slap across the leg for a serious transgression, something she did specifically to hurt Owen. He dismantled the rotting shed in the back garden and built a fish pond. Faye killed the fish with creosote.  I seem to recall Izzy and Katy inferring that it wasn't an out of the ordinary action for him though I can't see him striking Izzy in any way when she was young but we don't really know. Anyway. He's got a temper and is willing to use it. He may or may not have hurt his children but he certainly can be handy with his fists with adult men if need be. We do know that he had Jim McDonald beaten up. Owen was getting close to Liz and saw her ex as a threat, which he probably was!

All in all, Owen has never really been a sympathetic character overall even if he has times when he's gentler and kinder and more understanding. One incident that reflects those sides of him was when Izzy was with Gary. Gary was in the army and was injured in Afghanistan where he saw his best friend killed after saving Gary's own life. Gary went through nasty Post Traumatic Stress Syndrome and though Izzy was supportive, Gary became very over protective of her and ended up keeping her locked in the flat, scared she would be hurt. Gary had a breakdown and freaked out and Owen broke into the flat to find Gary cowering in one corner and Izzy cowering in the other. Owen gathered Gary in his arms and assured him everything would be ok rather than thump him one for scaring Izzy. It was pretty clear at that moment that Gary was in a bad way and Owen knew it. Mind you, he was pretty strongly against Izzy wanting to reconcile with Gary a few months later and Gary's short temper was the beginning of the end of Owen, though it was a long game to get here. 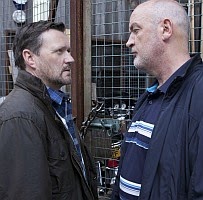 Owen was offered a partnership with a man called Pat Phelan. The deal felt a bit dodgey because Phelan was bankrupt and was encouraging Owen to put his own money in to the refit of an old building into new flats. It would have made Owen a great deal of cash if it all went smoothly but the project was in Mrs. Phelan's name due to the bankruptcy issue. It might have been legal but only just. Owen was persuaded to go ahead and he and Gary and other men hired got stuck in. But Phelan, sleazy Phelan, had his eye on Anna and was putting the moves on her, making her very uncomfortable. She didn't want to cause trouble because she didn't want the deal to fall through but when Gary found out, he lunged at Phelan and assaulted him for badgering his mother. Big mistake!

Phelan now had control over Gary and Owen. He could have Gary sent to jail and financially ruin Owen if he wanted to. And he did do the dirty on Owen financially but blackmailed Anna into an afternoon of sex in a hotel to save Gary's backside. Anna felt like she had no choice and went through with it. Eventually, of course, Owen found out and it nearly broke them permanently. This whole incident, starting with Anna's son, Gary, causing the problem and ending with Anna in that hotel roo was more than a crack in their relationship, it was a chasm the size of the Grand Canyon and they may have patched it over but it's a weak spot. Owen had to sell the builders' yard (to Tony Stewart) and scraped to get odd jobs to get by while Anna was working two jobs to make ends meet. He even lost the house to the bank and they had to move to the flat over the bookies'. That's a lot of stress on that patch job. 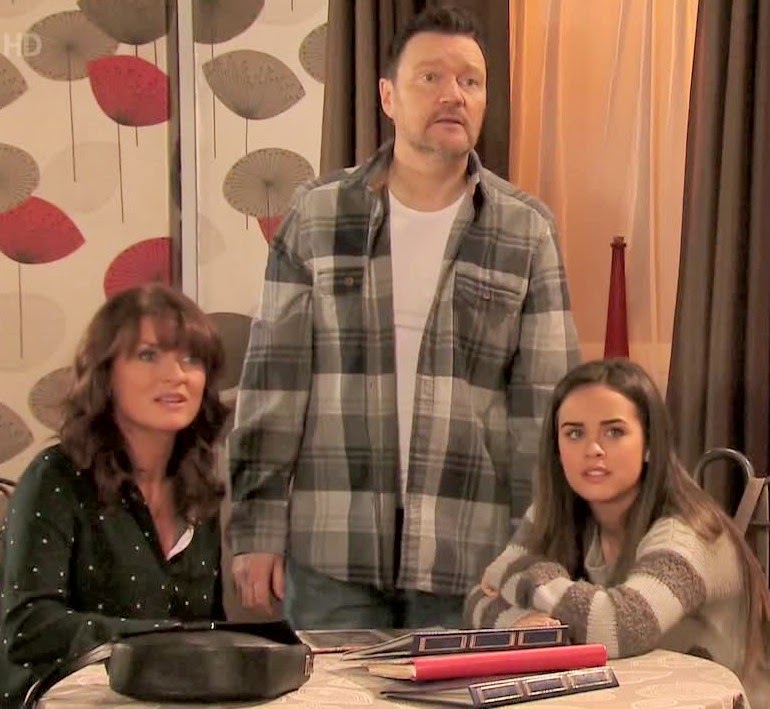 Recently, Owen's ex-wife landed on the doorstep. We had always been told that his wife, Linda, abandoned the family after Izzy was diagnosed and Katy was just a toddler. She never came back and Izzy always felt it was because of her illness that their mother left. Owen never said any different. But now we discover that Linda did have an affair and had left but only for a short time. She had trouble dealing with Izzy's diagnosis at first but knew she'd made a mistake. Owen refused to take her back and was adamant that she would never be allowed to see her children. She tried but he blocked every attempt, threw out every letter and card. Eventually, Linda left the country for Portugal. Now, 16 years later, she's back and she wants to get to know her adult children, much to Owen's annoyance. He couldn't get out of it because Katy caught him on the doorstep. She had no memories of her mother but Izzy was horrified.

And of course, the real truth came out about what Owen did. Izzy was absolutely crushed that her father let her believe all her life that it was her fault that her mother left. That's not something you get over easily. Anna saw the beautiful Linda as a threat to her little family and indeed, she had something to worry about. Linda told Owen she still loved him and wanted him to come to Portugal with her and the girls. That's even more pressure on that papered-over crack and it looks like it's starting to pull away at the edges.

I can't quite understand why you would still harbour feelings for someone who never forgave you and kept you from your children for nearly 20 years but there you go. Does Owen have unresolved feelings? Possibly. But to give him credit, he did come clean right away to Anna about what Linda asked. It didn't really help matters when Katy decided she was going with her mother. 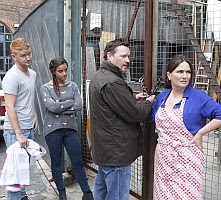 Anna has had to carry most of the financial load for the family over the past couple of years. She's had to do things she never thought she would to keep her family together. She's worried about her son, and her adopted daughter Faye. She's seen Faye's father return to her life and worried he might take Faye away. She thought she might lose Owen to his ex. The stress and worry have built up over time.

The straw that crashed through the camel's back was her 12 year old daughter Faye giving birth at Easter. Faye herself didn't know she was pregnant until she was about 7 months gone, only worried she was getting fat. Nobody noticed that Faye's weight gain seemed to be solely in one spot of her body which she hid under baggy clothes. Anna was too distracted by everything else to really pay attention to the finer details of Faye's life. Once the shock of the baby's arrival wore off, she had Owen to contend with. He was positive that Faye's friend Craig Tinker was the father and roughed him up. That's Owen's usual response, violence.

Anna wants Faye to keep the baby but Owen knows that Faye, at this point, doesn't want anything to do with the child. He thinks the little girl should be adopted but Anna won't hear of it. Family is important to her and in all likelihood, in true soap fashion, Faye will eventually bond with the baby but she has gone past her ability to handle anymore stress and has made him leave. He thought he could go for a little while to make her realize she'd miss him and need him but since she was adamant, he's gone for good.

While I didn't like the character much, he was always interesting and the actor was quite good.
Posted by Tvor at 09:32