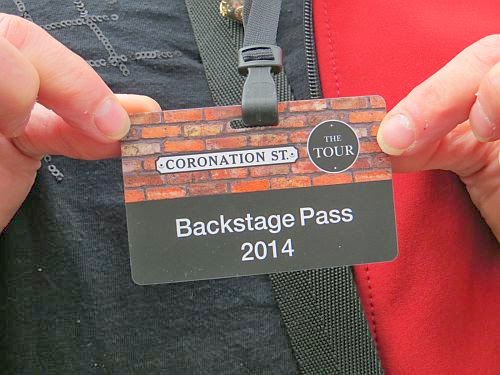 ITV has moved their production to a newn state of the art media centre over at Salford Quays and there was much speculation as to what would be done with the old studio and sets. Last year we discovered that a company that does tours, called Continuum, would be taking over the site and setting it up for tours for 6 months this summer. They opened last week and will close at the very beginning of October. They've sold out about 50% so far so I'm hoping if it really makes them money, they'll keep it open.

I was planning a visit to Manchester in April so I was really glad to find out that the tours would be open by the time I got here and I booked my tickets early! They cost 16.50 pounds which is a little high but not too bad comparing it to other UK attractions. They've got a good group of tour guides and you need to book your ticket for a date and time as well. They usher groups of about 30 through every 10 minutes. 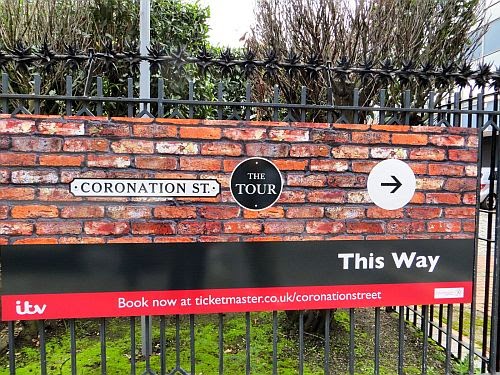 You enter through the back of Granada on Great John Street, which is off Quay Street. That's the former staff entrance. Where the staff parking lot was is now where you wait to queue to go in to the tour. There's a little cafe to one side and some functional and accessible toilets there as well. 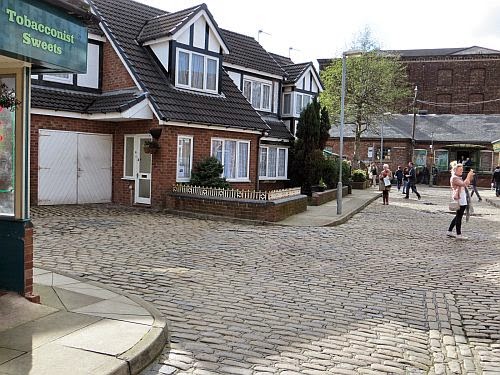 A quick run down of the tour: You enter through a doorway that was also used as the front entrance to Carla Connor Barlow's former flat and when you're through there, it's right next to the cast Green Room where they would be able to relax when not required on the set. You get an introduction there and there's some video showing on the wall. You are taken down a "corridor of stars", lined with portraits and photos of many of the famous faces from the 50+ years of the show and you can peek into a few of the old dressing rooms. They're so much smaller than you expect, little more than a closet. 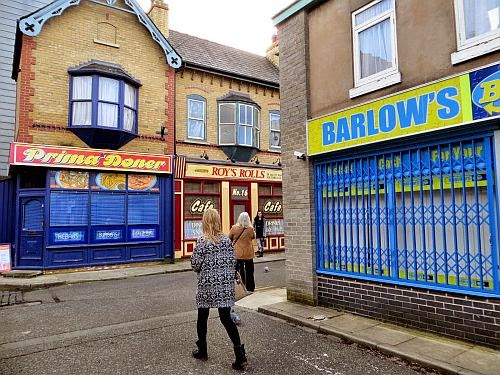 You then come into the studio proper where you get to see a few of the old sets set up and "dressed". The first one is Carla's old flat, all reds and dark wood and pristine unused kitchen! Also on display is the living room and kitchen of Number 8, The Platt household. there's the Dobbs house, which used to be Jack and Vera Duckworth's house most famously.  You get a look at the large Underworld factory set, too, with some recorded voice from Mike Baldwin from his factory back in the day. 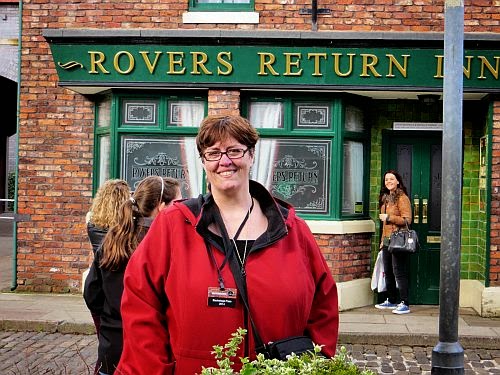 Of course, there's the Rovers. You really couldn't have a tour without that. Everyone gets to post for an official photo behind the bar. You can purchase them later in the gift shop for 7.50 pounds or two for 10. They print them about an 8x10 (A4) size with a nice souvenir folder for it. They will also put them on a usb stick for 8.50 I think. We managed to bag a seat in one of the famed booths while the guide chatted to us and group members took their turns behind the bar. 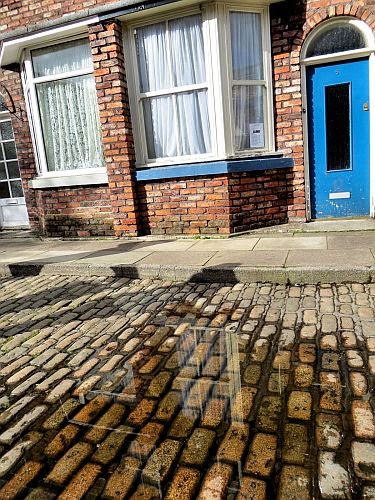 You then get a look at the production "nerve center" where the control panels and sound boards are, before waiting behind the door that's the entrance on the set into the Bistro. A few last minute words and they welcome you to Coronation Street and you are outside on the famed cobbles where you can spend as much time as you like wandering about and taking photos. You were not allowed to take them inside the studios because it slows down the process through the tour and there are other groups not long behind you.

Also inside the studio are displays that you can look at. That's a bit of a complaint for me. The displays are great. There are some costumes on display like Jack's jacket, Roy's jacket, some wedding dresses like Becky's pink frothy one. Hayley's flowered coffin is there as is one other one that has been used for quite a few funerals. Down further is Roy's train set complete with the hills and the little castle Hayley gave Roy. There's a glass case with iconic character trademarks like Hilda's rollers, Ena's hairnet and Deirdre's big 1970s glasses among other things. My complaint is that you really can't stop and have a good look. It's all pointed out as you walk by on to another set or room. 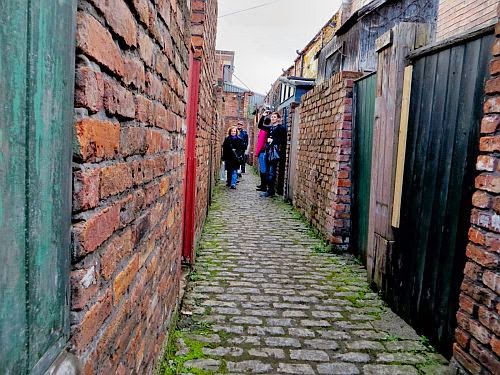 I think if the tours were every 20 minutes instead of every 10, you'd have that little bit of extra time to stop and look at the photos, displays and the award case. I've also been spoiled because the two times I have been fortunate to have backstage tours, they were private tours so there was no rush and we could stop and take photos  where we liked.

The guides are all very knowledgable and the one we had was very personable as well. He knew his stuff though I still could have told him a few bits and pieces. I didn't reallly get the chance but I've amassed a lot of interesting trivia over the years. One that occurred to me was when I saw the old red rotary dial telephone in the display case that was Elsie Tanner's phone. There has been a red telephone in the set of number 11 (now the Grimshaw residence) ever since. Watch for it. 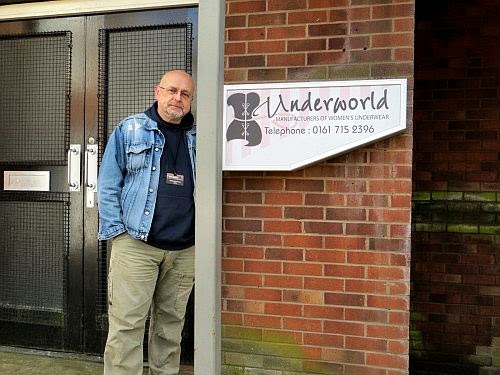 I've been on the set before but it never gets old. I try to make sure I can get photos of things that have changed since the last time I was there. We walked around, explored down the ginnel, around on Victoria Street and had a peek into Sally's back garden. The medical centre at the Rosamund street end of the outdoor set has the gift shop in it and you can see from leftover signs that it was not just used as the medical centre waiting room, but also some hospital areas. In the shop are the two snowmen that were built for Roy and Hayley as well. 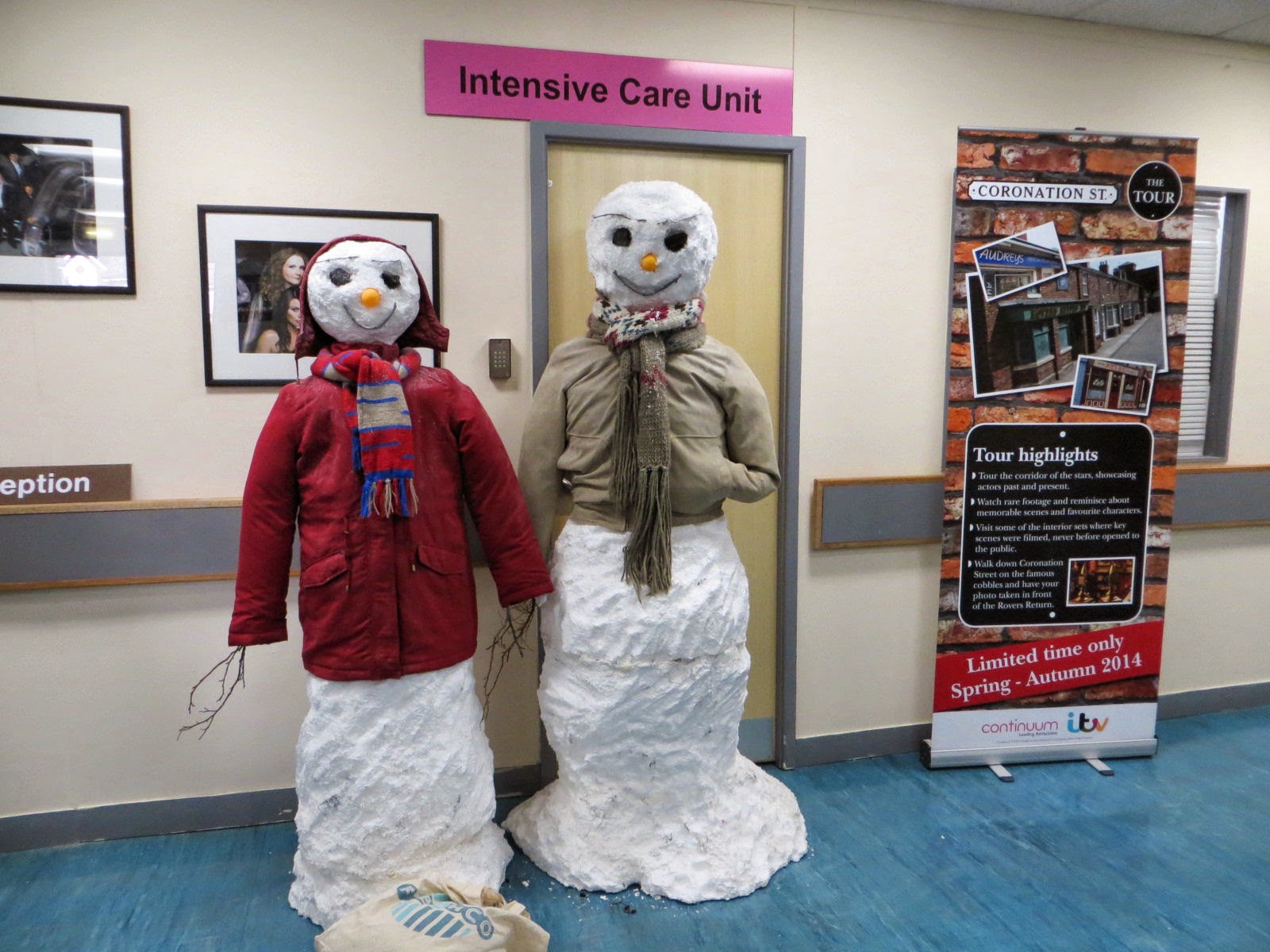 The gift shop itself doesn't really have a lot of merchandise and they've filled it out with some Manchester souvernirs. Perhaps as the summer moves on into high tourist season they'll be better stocked as it has only just opened less than a week ago. Much of the Corrie related items are Enesco products including the lovely Lilliput Lane miniature replicas of some of the houses and businesses. 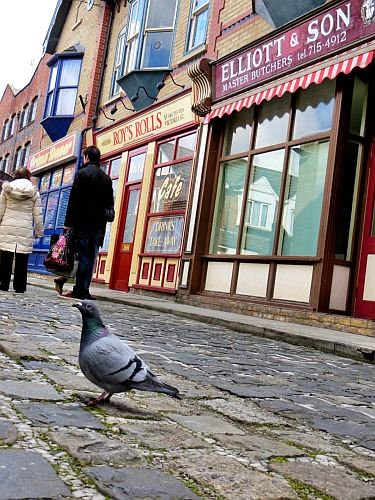 For Corrie Fans, if you can get to Manchester this summer, it's definitely worth it. We were waiting in the cafe after the tour for the Conversation Street podcasters, Michael and Gemma, (See their tour photos here on Facebook) and one man was fairly bouncing he was so excited to get on the cobbles. I really love seeing people so excited and eager because I know what it feels like that first time, it really is magic. The cafe is inside the studio property but outside where you go into the studio. A bit pricey as you might expect and not very fancy but it's a good place to wait until your tour starts or have a cuppa and wind down after.


There are more tour reviews from others over on the Coronation Street Blog here. 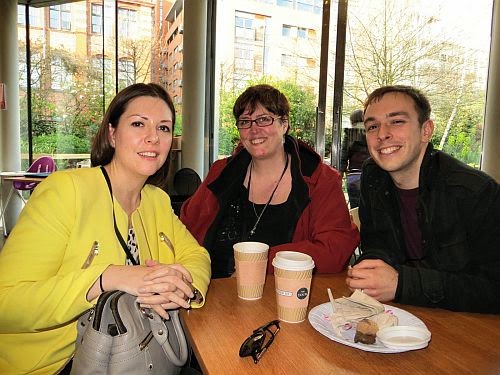 Gemma and Michael from Conversation Street 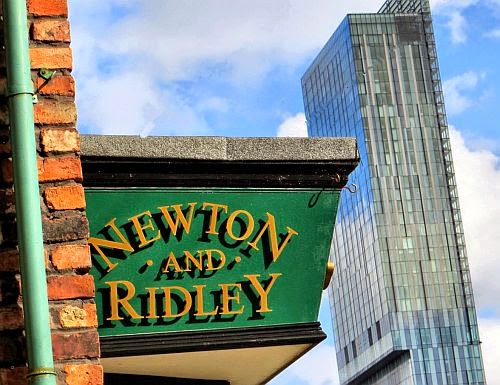 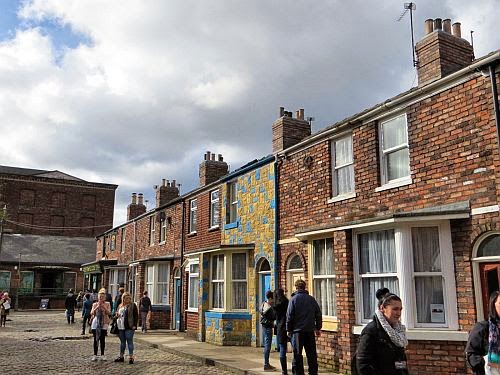 Tickets are available at Ticketmaster