Peter, cold hearted cheating manipulating bastard. Loves and is in love with his wife, but like a dog in heat. Tina is only infatuated no matter what she herself thinks and he knows it. He's  using it, pouring on the charm so that she won't leave town. She tried but she left anyway but I'm sure she'll be back. She can't stay away. Just as well she left before Hayley died so we didn't have to have that distract us from the important stuff.


Hayley went downhill very quickly from New Year and it was so hard to watch. Only the actors themselves and some top notch writing kept me glued to the screen, tears often streaming down my face. Talk about pulling out all the stops! We've been through a month of an amazing story, top notch performances and writing and it isn't over.

At the end of the month. Fiz has discovered the truth of the timing of Hayley's death. I've read that some fans were angry that Fiz made it all about her at first but wouldn't you do the same? Wouldn't you react that way to find out someone that close to you decided to die at their own chosen time and didn't tell you? That's the kind of reaction people have to the suicides of their loved ones and add to that the fact that two people knew and didn't stop her? If you'll pardon the pun, that is a very bitter pill to swallow.

But I loved the scene between Carla and Fiz with Carla gently making Fiz understand and later, Roy explaining Hayley's true motivation. Fiz is coming around to it but Roy is not only angry, he's resentful as hell. We weren't sure he wasn't going to blow the whistle at the funeral but he didn't and he made as touching and as appropriate a speech as he did at their wedding. It doesn't mean he's over it though because he's gone walkabout. I'm surprised he's not been sleepwalking and maybe we'll see a recurrence of it in the weeks to come as he grapples with it.

Some thoughts on the funeral episodes:

As usual, there's always people glaringly missing. This time, it was Liz. Where was she? Neither Todd nor Eva was there. Todd I can understand, but Eva worked with Hayley. I guess David and Kylie kept the salon open and the Price lot kept the Bistro going so that's fair enough. I guess the corner shop was closed during the funeral because everyone else possible that could have been working was somewhere else. The Kabin was clearly closed as was the Garage and factory. No Owen or Gary that I saw. Odd that they wouldn't be there to support Anna. Didn't see Marcus or Maria either but maybe they were working as well. I thought, even though Rob had to keep the shop open, we might have seen a scene somewhere this week where he gave his sister a hug of comfort. 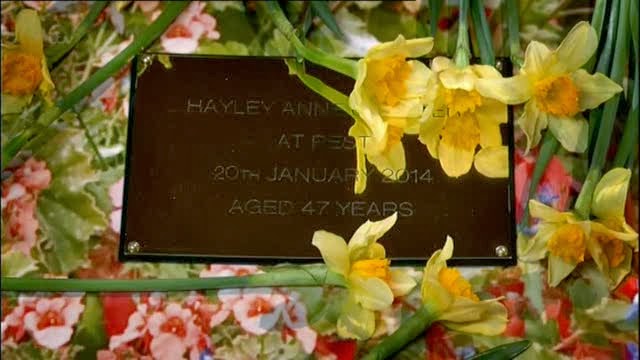 Funeral music. Don't Stop Me Now by Queen? I guess that's appropriate considering she wouldn't let Roy talk her out of taking her own life. But she touched Roy's heart with a Bach violin concerto because he thought it was the perfect duet. Just like them. "Close to You" as a singsong at the wake was heartbreaking. Nice, but just that little bit too much for Roy I think. I think it would have been better, though, to have Chesney as a pallbearer rather than Beth. She didn't quite fit in, for me. And laughed at Sally squabbling about being a bearer but only because she was put at the back. It was nice that Sean was one of them, too. Roy brought his satchel to the service. It seems to be his security blanket, doesn't it?

Kylie also hit rock bottom and when did David grow up? Man, even though he went off the rails last year, he sure pulled himself together after the shock of what happened to Nick. It was clear, as he said, that Kylie couldn't forgive David because she couldn't forgive herself and once she could admit that, it seems like she and David will rebuild their life together. I've really enjoyed this whole storyline in the whole year it's been ongoing. It's not over, because Nick is still dealing with his recovery which I feel has been shown quite well. Leanne's bruises lasted far longer than most bruises on the show and served as a daily reminder to Nick that he's damaged the one he loves the most.

Meanwhile Nick has managed to push Leanne away and is now walking around like a sulky child. It's your bed, mate, you lie in it. He's going to push her right into someone else's bed, I reckon and I figure it's going to be Kal's. I like him. I think he could be good for Leanne, as well. I know you should support your husband/wife through better, worse, sickness and health and she tried but it just wore her out. Gail's going around blaming Leanne and ranting that she should have stuck with Nick no matter what and Nick was only testing her when he said he was leaving. Then she That's not a bluff anyone should try if they don't want to lose and maybe that's exactly what he was doing, going by his miserable sour face after she let him leave. But it's too bad. He asked for it.

And while we're at it, as everyone else is pointing out, if Nick's too volatile to live with Simon, why is it ok for him to be around Max and a baby? Never mind, he's going back to the flat and Gail's even more upset because she's blaming Leanne that Nick is leaving mummy now! Is anyone else getting creeped out?


So Beth, Kirk, Craig and the caged rat are moving in with Chesney and Sinead and sometimes Joseph. Where are they putting everyone? That's a two bedroom house and they do this all the time in the Street, Someone's going to have to sleep on the sofa, and it's going to have to be Craig unless he's kipping in the old outhouse in the back yard. Same thing down the street where Leanne and Simon are moving in with Stella, Gloria and Eva.
Posted by Tvor at 15:08

I thought Hayley's send off was wonderful and I'm not ashamed to admit that I found it difficult to hold back the tears throughout both episodes.

I have been very impressed with Carla throughout this storyline. It was heartbreaking when Roy started to panic about the undertaker taking Hayley's body away but I loved the moment Carla reached out to him and reassured him that Hayley will always be in his heart and no one can take that away. I also liked the way that she comforted Fiz and calmed her down.
And I like the scene where she gave Beth her job back and Beth said: "Hayley was lucky to have you as a mate", to which Carla replied: "Oh I was the lucky one. We all were, Beth."

It has seemed like Carla has been holding everyone together and putting on a brave face, so when she was crying on her own outside the Rovers, I just wanted someone to comfort her. Although preferably someone other than Peter.

The Tina/Peter affair is embarrassing to watch. I'm not looking forward to a few more months of that. There wasn't even a proper build up to it and I can't believe we're supposed to want to watch such contrived nonsense.

I have always found Carla and Peter compelling to watch but the way that Tina has been forced into their lives is a joke. I will be glad when the storyline is over.

Thanks~
I know, after all Peter went through to be with Carla, it just doesn't seem to sit well that all of a sudden he'd start chasing after Tina. My only explanation is that his self esteem was at a low point after losing the business and having Carla giving him a job and paying for the wedding and her engagement ring etc. He probably didn't feel like he had any control and I suppose rather than taking to drink like I thought he might, this is the alternative. I still hate it though.

Exactly. If we were supposed to believe that Peter could cheat on self-proclaimed ‘love of his life’ Carla with barely-acquainted Tina, it should have at least been written convincingly. But in a span of weeks Tina apparently knew and understood him more than Carla who has been through hell and back with him and his alter-ego: drunk, vicious, and vile Peter. Bit of an insult to Carla that his declaration of love to her after supporting him and "making him a better man" (Peter's vows), could have been so easily swayed by an in-your-face barmaid, who hardly seems to ever work a full shift, I might add.

I don't think we're supposed to believe Tina knows Peter better than Carla, only that Tina *thinks* she does. She's a naive kid really. Carla really does *know* Peter but Tina's infatuated.