The year of the Platts 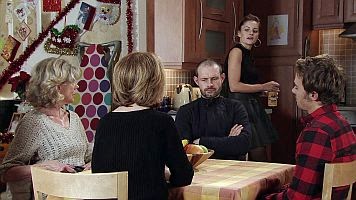 2013 was definitely the Year of the Platts on Coronation Street. What began on Christmas Day, 2012 had repercussions that are still having an impact today, early in 2014. I, for one, have enjoyed the ride!

We began with Kylie and David "on a break" and Nick jilting Leanne at the altar, having discovered that she'd ran after Peter earlier that day. She could possibly be forgiven, as Peter, thinking Carla had left him, made a beeline for the other woman he knew he could charm. Carla came back, Leanne was a distant memory but she didn't know it until she went to Peter to offer to call off her own wedding and saw Carla behind Peter. What to do? Marry Nick anyway and hope he never found out. Fail.

Nick and Kylie had a one night stand to soothe their pain and it all kicked off from there. Nick and Leanne made up and so did Kylie and David but, this is Soap land, and one of the prime Soap Opera Plot Devices states that if you have sex with the wrong person, you will get pregnant. Yep. And ironically, the main reason Kylie and David had temporarily split is because he wanted a baby and she didn't. Now she's up the duff and doesn't know who the daddy is.

Thing is, she'd confessed all to her mother-in-law, which was probably not such a good idea and was then persuaded not to give up the baby like she planned. It might be Nick's but it might be David's. Kylie began walking the tightrope. 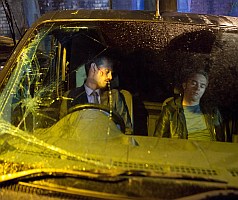 David found out and went right off the rails, but since he couldn't face losing Kylie, who should carry equal blame for the fiasco, he directed his rage against Nick, the older brother he'd always resented anyway. He tried to ruin Nick, both in business and in his marraige to Leanne (which had taken place a few weeks after the jilting), all the while playing up to Nick's sympathies and pretending to be the concerned brother. That culminated in a near-fatal car crash when Nick finally figured out David was behind all the tricks and confronted him. David tried to take control of the steering wheel to stop Nick from telling all to the family. They came to a stop in the middle of an intersection and a large truck (lorry) was unable to stop and smashed into them on Nick's side of the car.

I still don't believe that David tried to kill Nick even though everyone else has accused him of that (once the truth finally came out because it always does). But even so, his actions did result in the crash so he was still responsible for Nick's injuries.  Nick survived but is suffering from brain damage which has caused him to have uncontrolled rages and is breaking down his marraige as Leanne struggles to cope.

While Nick recovered, he insisted that David do a paternity test on the little baby girl that Kylie produced. The test was sloppily done, in my opinion with only a sample from David and the baby sent away. Why not one from Kylie and Nick as well? Nick would have been happy to contribute and he could have managed a few strands of Kylie's hair from a hairbrush. Never mind. It turned out that David was the father, much to Nick's disappointment. 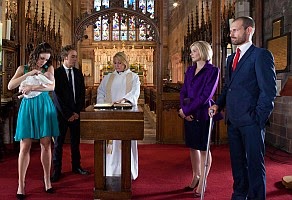 When Kylie found out about the test she went ballistic, realizing finally that David had known all along about the paternity issues and that he was behind the hate campaign and accident.  She outed David in front of the family at baby Lily's christening in classic soap style.

The whole family turned against David. The only reluctant friend he had was Tina but even that friendship caused her own relationship to blow up so she pushed David back out again. Rather than see him homeless, Audrey took him in at Gail's request even though Gail wasn't ready to forgive him. Maternal instincts are strong!

Inch by inch, David has been working his way back into his family and job at the salon. He's very, very contrite and remorseful but Nick was having none of it and insisted on the family taking sides. You can't blame him, he feels David has ruined his life. Kylie was angrier and angrier and when she saw that the family was beginning to warm up to David again, albeit reluctantly, it was her turn to go off the rails.

Kylie never had any self confidence. She never thought she was worth having a good life because she was brought up to believe she was less than nothing. She thought having a family of her own, a home, a job, all of that was too good to be true and now she's been made to pay for it. She spiralled downwards into a bottle until she hit bottom. Finally, David and Kylie were able to be honest with each other. Kylie took her share of responsibility for her fling with Nick and she and David have reconciled, much to Nick's dismay. 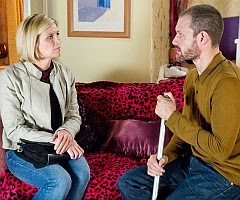 It's not quite over. Nick is still struggling and he's pushing his beloved Leanne away because he fears he'll hurt her after lashing out and slapping her on Christmas Day. She's just as determined to stand by her man but it looks very much like things will get worse before they get better. I'm glad they're not having Nick experience a miraculous recovery. It's far more realistic and it's continuing to have twists and turns. I have been speculating for the past few weeks that Leanne will have a fling herself, probably with Kal, Nick's new trainer. After many months of worry, stress and anxiety, and add Nick's rejection of her at the moment, and she's ripe for it.

Will Nick and Leanne manage to come out of it happy? It's hard to say. Nick has loved Leanne all his life and surely would want nothing more. If she has a fling, he'd be devastated but would probably blame himself for pushing her to it. We'll get more huffing and puffing from Gail who would certainly believe that Leanne is no better than Gail ever thought she was for hurting her baby boy yet again.

I have enjoyed the storyline, long though it was. All the actors involved were excellent and I felt that even Kylie's weeks of self destruction was completely understandable and far better than just one or two drunken nights with epic hangovers.  I realized that on top of the storyline covering Hayley's terminal illness, Corrie has been rather grim overall of late, but with performances like these, in both storylines, it's Corrie at its best.
Posted by Tvor at 08:31

What was Nick's reason for pushing Leanne into having an abortion when they were married the 1st time?

He felt they were too young, or at least he certainly was.

I've thought that David started all this with the nasty vicious insults he said to Kylie in front of Nick and his friends at the stag night. Kylie was really hurt and humiliated. Her choice to sleep with Nick was foolish, but understandable. David had been pushing her to have a baby. His behaviour showed her hesitation was valid, even if she was being deceitful in how she dealt with him about it.

THere was still no reason to have sex with someone else, especially David's brother of all people.

The "reason" was revenge. She wanted to "get even" with David & what would hurt him more than sleeping with his brother? I'm not condoning any of the behaviour from any of them. It was all childish and reckless. I'm just trying to see it from their damaged, dysfuntional point of view, to understand how the writers came up with it!

It's easy to see how they came up with it isn't it? What would have the maximum effect on David with a long term repercussion. I think it was a brilliant stroke, myself.

I've always thought what fun it would be to watch the process of developing a storyline to a performance onscreen. I wonder if they start by making a list of possible choices, from past scripts, or other shows, or the nightly news, or someone's creative flash, or whatever, then give it to researchers, if the story requires it, then storyliners, who plot the arc of the story (with their 3 week block format) then the writers, who must decide which of them will actually write the dialogue. Where Mr. Blackburn fits in this process would also be interesting to discover, as would how they work around the comings and goings of the acting cast. I know there are lots of books about Corrie, but do any of them explain the shows' construction in that way?

THere's actually a really good behind the scenes book called Access All Areas that goes a bit of the way to what you're asking.

Thank you. I'll look for it.