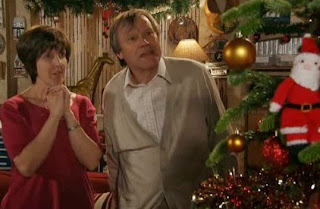 Coronation Street this month was dominated by the PlattTilsley storyline and watching Hayley's downward progress. There were little things, big things, other things and small things as there always is. There was a wedding and we have been launched into a classic Soap storyline of an affair on the cusp of beginning and we had the ending of another relationship.

Hayley struggled through chemotherapy all month though it wasn't until the end of the month that they started making her look a bit more frail and pale. Not even a word about losing her hair or tossing her cookies and with the kind of cancer she has, it would have been all guns blazing as pancreatic cancer is very aggressive and so would be the treatment.  Her erstwhile son came back looking for her. She finally got to meet her grandchildren but it cost her 5 grand. Christian certainly played all his cards didn't he?

It's been suggested that he sucked Hayley in, even going so far as to borrow two kids but before you buy into that, remember he'd shown her the photos of the kids the first time he showed up and he didn't know she was ill then. I think he returned the second time, even before he knew of her illness, intent on getting cash out of her and using his own children to do it. I don't think we'll see any more of him now. He was as thoroughly contemptible the second time as the first and as he was when we first met him years ago.

Hayley finally got angry and scared and her cheery optimistic facade cracked just after their lovely and memorable last Christmas together. She accused Roy of burying his feelings but she's every bit as guilty of that, whether she's doing it for his sake or her own or both. Phew, that was a difficult episode to watch. This storyline hits so close to the bone for a lot of people, some of whom just cannot watch. It's difficult for me, too, but the performances are the best I've ever seen on Corrie. I can't look away, even with tears running down my face. 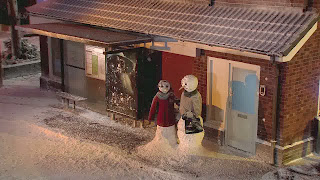 It's been very difficult watching Hayley get weaker and watching Roy watching her as well. He knows what she wants to do and he knows he only wants every last minute she can be with him. I'm sure he realizes that she wants that too, but quality of life is a big thing for Hayley. I don't know if she really will take her own life but it's starting to look like she just might. It would be even more controversial than just the discussion of it. We've only got weeks to go so we'll know soon enough.

David and Kylie and Nick and Leanne are in quite a pickle. Finding out that David knew and set out to destroy Nick, putting him in the position where the car accident happened, his lies and betrayal have really hurt her and have sent her in a downward spiral of pain and self pity. Everyone else is finally in a place where they can start to look forward, maybe even forgive David in time though never forgetting. Nobody can beat themselves up more than David is with himself but Kylie can't pull herself out of it, drinking and causing all manner of upset.

She's even spilled all the beans about her fling with Nick and David more or less causing the accident. He might not have caused the crash per se, but he did cause the car to go out of control and come to a halt in a dangerous position in the road in the way of a truck that couldn't stop in time but I still don't think he meant to try to kill Nick. I do feel bad for Kylie in some ways. She's had a very rough life and just when she thought she could be happy, something happens that makes her think it was all too good to be true. She believes that she doesn't deserve to be happy so she's going about proving that she's as bad as everyone else, including she believes she is.

I think she'll reach bottom and maybe then will reach out to David again because she really does love him and he wants her. Meanwhile, Nick and Leanne separated for about five minutes due to Nick trying to spare Leanne the struggle. Poor Nick, he feels so out of control and unable to do anything about it. He's causing Leanne undue stress and so he's finally pushing her away. I keep coming back to the feeling that Leanne is going to have a fling, someone that can make her happy for awhile and since Peter is already occupied with thoughts of Tina, I think it's going to be Kal. That's my prediction. 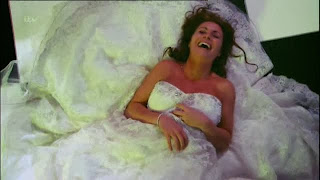 Peter and Carla's wedding was good fun with the bride getting legless. Carla did look lovely. You would expect that. However, it went downhill from there. Peter couldn't keep his eyes off Tina, not after that kiss in the smoking shelter the night before. How romantic, a smelly grubby back yard under the stars. And by the end of the month, they'd had sex on the sofa and elsewhere while Carla was with her dying friend. Peter seems to be completely unrepentant no matter what he seems to be telling Tina. He's not upset at cheating on Carla, he's more concerned with trying to keep it from her. I can't help thinking that this wouldn't have happened had Ken been around this year. He tends to be Peter's moral compass or at least that little conscience on his shoulder. This won't end well. Carla should remember the last time she married in December. That really ended in a bang with murderer Tony blowing up the factory!

After all that bullying story with Grace and Faye, we've not seen Faye all month. That really *is* grounded isn't it! Seriously, though, aside from seeing her with the police and being told she's grounded, there have been no repercussions. Have we seen her apologize to Simon? We never found out if Grace was cautioned by the police as well and there has been seemingly no threats or glares from her at school. Faye worried that nobody would speak to her or want to be her friend if she wasn't Grace's friend. Has that happened? Inquiring minds want to know. 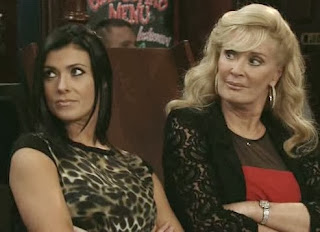 We finally met Steve's new friend from school, Andrea. More scowling and arm crossing from Michelle who really isn't very nice at all these days. She's miserable and sour and I really can't see what Steve sees in her. He went for Becky last time he was with Michelle because Becky was a lot more fun. Michelle dragged him down with all her problems then and she's doing the same thing now. 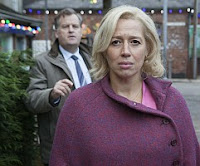 Brian and Julie have split up as well. That makes me sad. They were a really wonderful couple, really great Corrie characters. Brian isn't particularly likeable but he's not meant to be and he and Julie together were just superb. I always maintained that they were the Mavis and Derek of the new millenium. Brian pompous and Julie wittering but Julie, of course, has much more style and independence than Mavis.

I guess now she and Eileen can be moaning singles together. I do like how their sisterhood has grown. I'm refusing to discuss Todd because I really dislike the personality they've now given him. He was snotty  on his last visit but he's descented into what we like to call a "piece of work" and perilously close to unredemption.

January is going to be sad, with Hayley's death and frustrating with Tina mooning around Peter.
Posted by Tvor at 12:19

It really is poor writing to not show at least some fallout from the Faye bullying storyline. It's almost like the powers that be just decided it wasn't working and are dealing with it by avoiding the story altogether. In Corrie reality, Grace's revenge on Faye would have been harsh and swift. She wouldn't wait almost two months to confront Faye, that is, if we ever see Grace again.

Aside from that, Peter's pairing with Tina is horribly contrived. An opinion that seems to be shared by others. While I have no great love for Dennis and Gloria, even their flirting feels more natural than anything we've seen Peter and Tina do. Hope Carla teaches them both a lesson.

I agree. I actually preferred the Grace character to the Faye character-The actress playing Grace is very talented-she has more spark and believability than Faye. Faye has done some horrible things and has never really had to face any consequences, all she does is fold her arms, pout trollfully and say "Ah'm sorr-ay" so I did not expect anything different this time. There were countless opportunities to resolve the storyline but maybe it can still happen-and Grace can come back!! Who knows,maybe Grace is a Foster/Adopted child too and we could have a whole new storyline for her. Bullying is a very serious subject and the storyline deserves to be completeted, not just shoved behind the sofa, so to speak.

The bullying storyline was just a plot device for the ghastly Tina and Peter.

For the first time in a very long time I have stopped watching Corrie properly.

Tina and Peter make my skin crawl and I find the story ridiculous in every way possible. I'm aware that it's leading to Tina's exit but the thought of having to sit through months of this nonsense is unbearable. I feel very sorry for Carla.

I will definitely be watching Hayley's last week, though. Thankfully, they're sending Tina off for a few weeks so she will be out of the way.

As awful as Peter and Tina are, I still found Kevin and Molly far more cringeworthy. It's disgraceful after all Peter went through to be with Carla, though.

Grace was a very well written and acted character, I agree. It was very sloppy that there was absolutely no follow up to that.